Wood gas is a syngas fuel which can be used as a fuel for furnaces, stoves and vehicles in place of petrol, diesel or other fuels. During the production process biomass or other carbon-containing materials is gasified within the oxygen-limited environment of a wood gas generator to produce hydrogen and carbon monoxide. These gases can then be burnt as a fuel within an oxygen rich environment to produce carbon dioxide, water and heat. In some gasifiers this process is preceded by pyrolysis, where the biomass or coal is first converted to char, releasing methane and tar rich in polycyclic aromatic hydrocarbons.

The first wood gasifier was apparently built by Bischof in 1839. The first vehicle powered by wood gas was built by Thomas Hugh Parker in 1901.[1] Around 1900, many cities delivered wood gas (centrally produced, typically from coal) to residences. Natural gas began to be used only in 1930.

Wood gasifiers are still manufactured in Singapore, China and Russia for automobiles and as power generators for industrial applications. 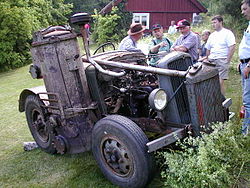 Wood gasifier on a Ford truck converted into a tractor

Wood gasifiers can power either spark ignition engines, where 100% of the normal petrol can be replaced with little change to the carburation, or in a diesel engine, feeding the gas into the air inlet that is modified to have a throttle valve, if it didn't have it already. On diesel engines the diesel fuel is still needed to ignite the gas mixture, so a mechanically regulated diesel engine's "stop" linkage and probably "throttle" linkage must be modified to always give the engine a little bit of injected fuel (Often under the standard idle per-injection volume). Wood can be used to power cars with ordinary internal combustion engines if a wood gasifier is attached. This was quite popular during World War II in several European, African and Asian countries because the war prevented easy and cost-effective access to oil. In more recent times, wood gas has been suggested as a clean and efficient method to heat and cook in developing countries, or even to produce electricity when combined with an internal combustion engine. Compared to WWII technology, gasifiers have become less dependent on constant attention due to the use of sophisticated electronic control systems, but it remains difficult to get clean gas from them. Purification of the gas and feeding it into natural gas pipelines is one variant to link it to the existing refueling infrastructure. Liquefaction by the Fischer–Tropsch process is another possibility.

Efficiency of the gasifier system is relatively high. The gasification stage converts about 75% of fuel energy content into a combustible gas that can be used as a fuel for internal combustion engines. Based on long-term practical experiments and over 100,000 km drive with a wood gas-powered car, the energy consumption has been 1.54 times higher compared to the energy demand of the same car on petrol (not including the energy needed to extract, transport and refine the oil from which petrol is derived). This means that 1000 kg of wood combustible matter has been found to substitute 365 litres of petrol during real transportation in similar driving conditions and with the same otherwise unmodified vehicle.[3] This can be considered to be a good result, because no other refining of the fuel is required. This study also considers all possible losses of the wood gas system, like preheating of the system and carrying of the extra weight of the gas-generating system. In power generation reported demand of fuel is 1.1 kg wood combustible matter / kWh electricity.[4]

Gasifiers have been built for remote Asian communities using rice husk, which in many cases has no other use. One installation in Burma uses an 80 kW modified diesel for about 500 people who are otherwise without power.[5] The ash can be used as Biochar fertilizer, so this can be considered a renewable fuel.

Against general belief, exhaust gas emission from an internal combustion engine is significantly lower on wood gas than on petrol.[6] Especially the HC emissions are low on wood gas.[7] A normal catalytic converter works well with wood gas, but even without it, emission levels less than 20 ppm HC and 0.2% CO can be easily achieved by most automobile engines. Combustion of wood gas generates no particulates, and the gas renders thus very little carbon black amongst motor oil.[8]

Certain stove designs are in effect a gasifier working on the updraft principle—the air passes up through the fuel, which can be a column of rice husks, and is combusted, then reduced to carbon monoxide by the residual char on the surface. The resulting gas is then burnt by heated secondary air coming up a concentric tube. Such a device behaves very much like a gas stove. This arrangement is also known as a Chinese burner. 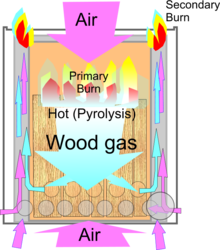 An alternative stove based on the downdraft principle and typically built with nested cylinders also provides high efficiency. Combustion from the top creates a gasification zone with the gas escaping downwards through ports located at the base of the burner chamber. The gas mixes with additional incoming air to provide a secondary burn. Most of the CO produced by gasification is oxidized to CO2 in the secondary combustion cycle; therefore, gasification stoves carry lower health risks than conventional cooking fires.

Another application is the use of producer gas to displace LDO (light density fuel oil) in industrial furnaces.[9] 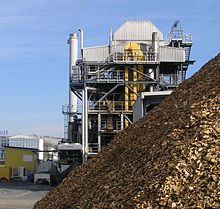 A wood gasifier takes wood chips, sawdust, charcoal, coal, rubber or similar materials as fuel and burns these incompletely in a fire box, producing solid ashes and soot (which have to be removed periodically from the gasifier) and wood gas. The wood gas can then be filtered for tars and soot/ash particles, cooled and directed to an engine or fuel cell.[10] Most of these engines have severe purity requirements of the wood gas, so the gas often has to pass through extensive gas cleaning in order to remove or convert (i.e. to "crack") tars and particles. The removal of tar is often accomplished by using a water scrubber. Running wood gas in an unmodified gasoline-burning internal combustion engine may lead to problematic build-up of unburned compounds.

The quality of the gas from different gasifiers varies a great deal. Staged gasifiers, where pyrolysis and gasification occur separately (instead of in the same reaction zone as was the case in e.g. the WWII gasifiers), can be engineered to produce essentially tar-free gas (less than 1 mg/m³), while single-reactor fluid-bed gasifiers may exceed 50,000 mg/m³ tar. The fluid bed reactors have the advantage of being much more compact (more capacity per volume and price). Depending on the intended use of the gas, tar can be beneficial as well by increasing the heating value of the gas.

The heat of combustion of producer gas (a term used in the U.S. meaning wood gas produced for use in a combustion engine) is rather low compared to other fuels. Taylor [11] reports that "producer gas" has a lower heating value of 5.7 MJ/kg versus 55.9 MJ/kg for natural gas and 44.1 MJ/kg for gasoline. The heating value of wood is typically 15-18 MJ/kg. Presumably, these values can vary somewhat from sample to sample. The same source reports the following chemical composition by volume which most likely is also variable: 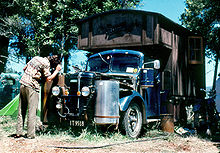