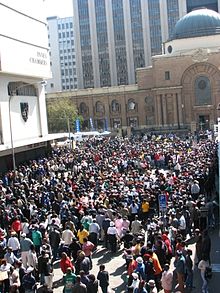 A crowd outside the Johannesburg High Court during the Jacob Zuma rape trial.

Important officers in a High Court

Each High Court is headed by a Judge President. The registrar keeps all the official court documents. The family advocate must be consulted on all matters involving children, as the High Court is the "upper guardian" of all children in South Africa. The Master of the High Court keeps all the records relating to people’s estates (deceased or insolvent). The Sheriff delivers certain documents to the parties in a civil case, and also attaches property when a warrant is issued. The Director of Public Prosecutions, who used to be called the Attorney-General, is responsible for criminal prosecutions by the state. The State Attorney is the lawyer who represents the state in civil actions (where the state is suing or being sued).

There are at the moment thirteen High Courts. The Renaming of High Courts Act, 2008 replaced the old apartheid-era names of the divisions. When the rationalisation of the legal system is completed by the passage of the Superior Courts Bill, the multiple courts in provinces that have them will be merged into "seats" of a single court. The exception to this is Gauteng, in which the separate North and South Gauteng High Courts will remain, due to the high number of cases generated by the presence of the national government in Pretoria (North Gauteng) and the country's commercial hub in Johannesburg (South Gauteng).

The present thirteen High Courts are:

(The province of Mpumalanga currently has no High Court and falls within the jurisdiction of the North Gauteng High Court in Pretoria.)

Circuit Courts are also part of the High Court. They sit at least twice a year, moving around to serve more rural areas.