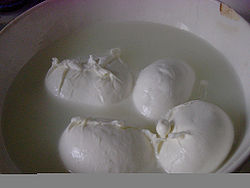 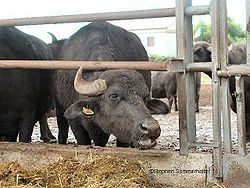 A water buffalo on a farm in Paestum, Campania

Buffalo mozzarella (Italian: mozzarella di bufala) is a mozzarella made from the milk of the domestic water buffalo.

Apart from Italy, its birthplace, buffalo mozzarella is manufactured in many locations around the world. There are producers in Switzerland,[1] United States,[2][3][4] Australia,[5] Mexico, Brazil, Canada, Venezuela, Argentina, United Kingdom, Spain, Colombia,[6] Thailand,[7] Egypt,[8] India[9] and South Africa,[10] all using milk from their own herds of water buffaloes. Some scientists believe that Italy and Bulgaria have the best dairy water buffaloes.[11]

In Italy, the cheese is produced in areas ranging from Rome in Lazio to Paestum (near Salerno) in Campania, and there is a production area in near Foggia, Puglia.[12]

Buffalo mozzarella is an important industry in Italy. Italy is home to a €300m ($430m) a year industry. Italy produces around 33,000 tonnes of its trademark mozzarella from buffalo milk every year, with 16 percent sold abroad, mostly in the European Union. France and Germany are the main importers but sales have been expanding in Japan and Russia."[13]

Among the many other Italian cheeses that have PDO status are Gorgonzola, Parmigiano-Reggiano and Asiago cheese (see also List of Italian PDO cheeses)

The history of water buffalo in Italy is not settled.

One theory is that Asian water buffalo were brought to Italy by Goths during the migrations of the early medieval period.[17] However, according to the Consorzio per la Tutela del Formaggio Mozzarella di Bufala Campana, the "most likely hypothesis" is that they were introduced by Normans from Sicily in 1000, and that Arabs had introduced them into Sicily.[18] The Consorzio per la Tutela also refers to fossil evidence (the prehistoric European Water Buffalo, Bubalus murrensis) suggesting that water buffalo may have originated in Italy.[19] A fourth theory is that water buffalo were brought from Mesopotamia into the Near East by Arabs and then introduced into Europe by pilgrims and returning crusaders.[8]

"In ancient times, the buffalo was a familiar sight in the countryside, since it was widely used as a draught animal in plowing compact and watery terrains, both because of its strength and the size of its hooves, which do not sink too deeply into moist soils."[citation needed]

References to cheese products made from water buffalo milk appeared for the first time at the beginning of the twelfth century.[citation needed] Buffalo mozzarella became widespread throughout the south of Italy from the second half of the eighteenth century, before which it had been produced only in small quantities.[20]

"Production in and around Naples was briefly interrupted during World War II, when retreating Nazis slaughtered the area's water buffalo herds, yet commenced a few years after the armistice was signed".[citation needed]

The steps required to produce buffalo mozzarella are the following:[21][22]

The digestive system of water buffaloes permits them to turn low grade vegetation into rich milk which, due to its higher percentage of solids, provides higher levels of protein, fat and minerals than cow milk.[23]