The son of the Qajar ruler Naser al-Din Shah Qajar, Mozaffar ad-Din was named crown prince and sent as governor to the northern province of Azarbaijan in 1861. He spent his 35 years as crown prince in the pursuit of pleasure; his relations with his father were frequently strained, and he was not consulted in important matters of state. Thus, when he ascended the throne in May 1896, he was unprepared for the burdens of office.

At Mozaffar ad-Din's accession Iran faced a financial crisis, with annual governmental expenditures far in excess of revenues due to the policies of his father. During his reign, Mozzafar ad-Din attempted some reforms of the central treasury; however, the previous debt incurred by the Qajar court, owed to both England and Russia, significantly undermined this effort. He had to make up the existing deficit by contracting more unpopular loans from Russia, which exacted political concessions in return.

Like his father he visited Europe three times. During these periods, on the encouragements of his chancellor Amin-os-Soltan , he borrowed money from Nicholas II of Russia to pay for his extravagant traveling expenses. During his first visit he was introduced to the "cinematographe" in Paris, France. Immediately falling in love with the silver screen the Shah ordered his personal photographer to acquire all the equipment and knowledge needed to bring the moving picture to Iran, thus starting Iranian Cinema.[1] The following is a translated excerpt from the Shah's diary: 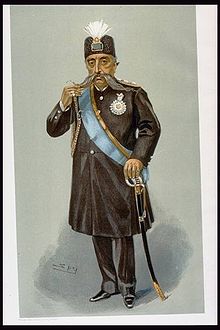 Portrait of the Shah of Persia Muzaffer-Ed-Din by Leslie Ward, 1903.

....[At] 9:00 P.M. we went to the Exposition and the Festival Hall where they were showing cinematographe, which consists of still and motion pictures. Then we went to Illusion building ....In this Hall they were showing cinematographe. They erected a very large screen in the centre of the Hall, turned off all electric lights and projected the picture of cinematography on that large screen. It was very interesting to watch. Among the pictures were Africans and Arabians traveling with camels in the African desert, which was very interesting. Other pictures were of the Exposition, the moving street, the Seine River and ships crossing the river, people swimming and playing in the water and many others that were all very interesting. We instructed Akkas Bashi to purchase all kinds of it [cinematographic equipment]and bring to Tehran so God willing he can make some there and show them to our servants.

Additionally, in order to manage the costs of the state and his extravagant personal lifestyle Mozzafar ad-din Shah was forced to sign many concessions, providing foreigners with monopolistic control of various Iranian industries and markets. One example being the D'Arcy Oil Concession.

Widespread fears amongst the aristocracy, educated elites, and religious leaders about the concessions and foreign control resulted in some protests in 1906. These resulted in the Shah accepting a suggestion to create a Majles (National Consultative Assembly) in October 1906, by which the monarch's power was curtailed as he granted a constitution and parliament to the people. He died of a heart attack 40 days after granting this constitution. 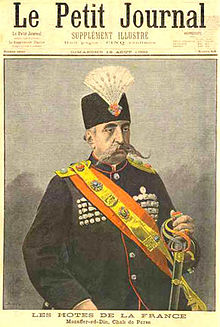 The Shah visited the United Kingdom in August 1902 on the promise of receiving the Order of the Garter as it had been previously given to his father, Nasser-ed-Din Shah. King Edward VII refused to give this high honor to a non-Christian. Lord Lansdowne, the Foreign Secretary, had designs drawn up for a new version of the Order, without the Cross of St. George. The King was so enraged by the sight of the design, though, that he threw it out of his yacht's porthole. However, in 1903, the King had to back down and the Shah was appointed a member of the Order.[2]

A nephew of his wife was Mohammed Mossadeq, the Prime Minister of Iran that was overthrown by a coup d'état staged by the United Kingdom and the United States in the 1950's.