The isotope-ratio mass spectrometer (IRMS) allows the precise measurement of mixtures of stable isotopes.[3] This technique has two different applications in the earth and environmental sciences. The analysis of 'stable isotopes' is normally concerned with measuring isotopic variations arising from mass-dependent isotopic fractionation in natural systems. On the other hand, radiogenic isotope analysis involves measuring the abundances of decay-products of natural radioactivity, and is used in most long-lived radiometric dating methods.

Most instruments used for precise determination of isotope ratios are of the magnetic sector type. This type of analyzer is superior to the quadrupole type in this field of research for two reasons. First, it can be set up for multiple-collector analysis, and second, it gives high-quality 'peak shapes'. Both of these considerations are important for isotope-ratio analysis at very high precision and accuracy.[4]

The sector-type instrument designed by Alfred Nier was such an advance in mass spectrometer design that this type of instrument is often called the 'Nier type'. In the most general terms the instrument operates by ionizing the sample of interest, accelerating it over a potential in the kilo-volt range, and separating the resulting stream of ions according to their mass-to-charge ratio (m/z). Beams with lighter ions bend at a smaller radius than beams with heavier ions. The current of each ion beam is then measured using a 'Faraday' detector or multiplier detector.

Many radiogenic isotope measurements are made by ionization of a solid source, whereas stable isotope measurements of light elements (e.g. H, C, O) are usually made in an instrument with a gas source. In the latter case, dual gas inlets enable reliable repetition of measurements by supplying continuous streams of the reference and sample gases, which are sequentially switched by a changeover valve. The IRMS's collector also features an array of Faraday cups (conductive, metal vessels which neutralise ions that hit them whilst themselves becoming charged), or "multicollector", which allows the simultaneous detection of multiple isotopes.[5] Samples must be introduced as pure gases, achieved through combustion, gas chromatographic feeds,[6] or chemical trapping. By comparing the detected isotopic ratios to a measured standard, an accurate determination of the isotopic make up of the sample is obtained. For example, carbon isotope ratios are measured relative to the international standard for CO2. (The CO2 standard is produced from a fossil belemnite found in the Pee Dee formation, which is a limestone formed in the Cretaceous period in South Carolina, U.S.A.; its 13C:12C ratio is 0.0112372.) Oxygen isotope ratios are measured relative the standard, V-SMOW (Vienna Standard Mean Ocean Water).

Instruments have been developed based on several techniques for mass separation and tuned to a wide range of applications. The article below describes one of these application areas, instruments adapted specifically to measure the relative abundance of masses up to around mass number 66.

This field is of interest because the relative variation in mass between isotopes in this range is large enough to give rise to variation in chemical, physical and biological behaviour. This leads to measurable effects on the isotopic composition of samples characteristic of their biological or physical history. 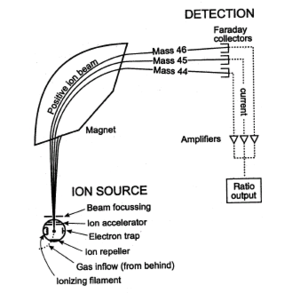 It is critical that the sample be processed before entering the mass spectrometer so that only a single chemical species enters at a given time. Generally, samples are combusted or pyrolyzed and the desired species (usually hydrogen gas H2, nitrogen (N2), carbon dioxide, or sulfur dioxide) is purified by means of traps, filters, catalysts and/or chromatography.

The two most common types of IRMS instruments are continuous flow[7] and dual inlet. In dual inlet IRMS, purified gas obtained from a sample is alternated rapidly with a standard gas (of known isotopic composition) by means of a system of valves, so that a number of comparison measurements are made of both gases. In continuous flow IRMS, sample preparation occurs immediately before introduction to the IRMS, and the purified gas produced from the sample is measured just once. The standard gas may be measured before and after the sample or after a series of sample measurements. While continuous-flow IRMS instruments can achieve higher sample throughput and are more convenient to use than dual inlet instruments, the yielded data is of approximately 10-fold lower precision.

A static gas mass spectrometer is one in which a gaseous sample for analysis is fed into the source of the instrument and then left in the source without further supply or pumping throughout the analysis. This method can be used for 'stable isotope' analysis of light gases (as above), but it is particularly used in the isotopic analysis of noble gases (= rare or inert gases) for radiometric dating or isotope geochemistry. Important examples are argon-argon dating and helium isotope analysis.

There are several advantages of the TIMS method. It has a simple design, is less expensive than other mass spectrometers, and produces stable ion emissions. It requires a stable power supply, and is suitable for species with a low ionization potential, such as Strontium (Sr), and Lead (Pb).

The disadvantages of this method stem from the maximum temperature achieved in thermal ionization. The hot filament reaches a temperature of less than 2500 degrees Celsius, leading to the inability to create atomic ions of species with a high ionization potential, such as Osmium (Os), and Tungsten (Hf-W). Although the TIMS method can create molecular ions instead in this case, species with high ionization potential can be analyzed more effectively with MC-ICP-MS.

An MC-ICP-MS instrument is a multiple collector mass spectrometer with a plasma source. MC-ICP-MS was developed to improve the precision achievable by ICP-MS during isotope-ratio measurements. Conventional ICP-MS analysis uses a quadrupole analyser, which only allows single-collector analysis. Due to the inherent instability of the plasma, this limits the precision of ICP-MS with a quadrupole analyzer to around 1%, which is insufficient for most radiogenic isotope systems.

Isotope-ratio analysis for radiometric dating has normally been determined by TIMS. However, some systems (e.g. Hf-W and Lu-Hf) are difficult or impossible to analyse by TIMS, due to the high ionization potential of the elements involved. Therefore these methods can now be analysed using MC-ICP-MS.

Magnetic sector mass spectrometry requires a high acceleration potential in order to properly resolve species with different masses. Since the ion beam is normally positive, a multi-collector ICP-MS (unlike conventional ICP-MS) needs to have an ion source up to 8000 V positive, in order to keep the analyzer at electrical ground. This was one of the engineering challenges of developing MC-ICP-MS. Magnetic sector mass spectrometry also requires an ion beam with a relatively small range in ion energy. This is achieved in MC-ICP-MS by using an electrostatic and/or quadrupole pre-filter, which allows the ion energy of the beam to be homogenized before entering the magnetic sector.

Moving wire IRMS is useful for analyzing Carbon-13 ratios of compounds in a solution, such as after purification by liquid chromatography. The solution (or outflow from the chromatography) is dried onto a nickel or stainless steel wire. After the residue is deposited on the wire, it enters a furnace where the sample is converted to CO2 and water by combustion. The gas stream finally enters a capillary, is dried, ionized, and analyzed.[9] This process allows a mixture of compounds to be purified and analyzed continuously, which can decrease the analysis time by a factor of four.[9] Moving wire IRMS is quite sensitive, and samples containing as little as 1 nano-mole of Carbon can yield precise (within 1‰) results.[10]

For isotopes occurring at extremely low levels, accelerator mass spectrometry (AMS) can be used. For example, the decay rate of the radioisotope 14C is widely used to date organic materials, but this approach is limited to relatively large samples no more than a few thousand years old. AMS extended the range of 14C dating to about 60,000 years BP, and is about 106 times more sensitive than conventional IRMS.

The variation outlined above has applications in hydrology since most samples will lie between these two extremes.[11] Given a sample of water from an aquifer, and a sufficiently sensitive tool to measure the variation in the isotopic ratio of hydrogen in the sample, it is possible to infer the source, be it ocean water seeping into the aquifer or precipitation seeping into the aquifer, and even to estimate the proportions from each source.[12]

Another application is in paleotemperature measurement for Paleoclimatology. For example one technique is based on the variation in isotopic fractionation of oxygen by biological systems with temperature.[13]

In forensic science, research suggests that the variation in certain isotope ratios in drugs derived from plant sources (cannabis, cocaine) can be used to determine the drug's continent of origin.[15]