The term movement conservatism was an inside term describing conservatism in the United States‎ and New Right. According to Nash (2009) the movement comprises a coalition of five distinct impulses. From the mid-1930s to the 1960s, libertarians, traditionalists, and anticommunists made up this coalition, with the goal of fighting the liberals' New Deal. In the 1970s, two more impulses were added with the addition of neoconservatives and the Religious Right.[1] 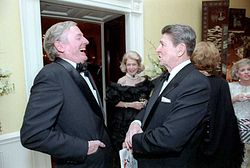 Editor William F. Buckley, Jr. (left) and politician Ronald Reagan were dominant leaders of the movement from the 1950s to the 1980s

R. Emmett Tyrrell, a prominent writer on the right, says, "the conservatism that, when it made its appearance in the early 1950s, was called the New Conservatism and for the past fifty or sixty years has been known as 'movement conservatism' by those of us who have espoused it."[2] Political scientists Doss and Roberts say that "The term movement conservatives refers to those people who argue that big government constitutes the most serious problem.... Movement conservatives blame the growth of the administrative state for destroying individual initiative."[3] Historian Allan J. Lichtman traces the term to a memorandum written in February 1961 by William A. Rusher, the publisher of the National Review to William F. Buckley, Jr., envisioning the National Reviewas not just "the intellectual leader of the American Right," but more grandly of "the Western Right." Rusher envisioned philosopher kings would function as "movement conservatives".[4]

Recent examples of conservative writers using the term "movement conservatism" include Sam Tanenhaus,[5] Paul Gottfried,[6] and Jonathan Riehl.[7] Liberal New York Times columnist Paul Krugman devotes chapter 6 of his The conscience of a liberal (2009) to an attack on the group.

Scholars have traced the political role of movement conservatives in recent decades. Political scientist Robert C. Smith reports that in 1960, "While movement conservatives supported Nixon against Kennedy, the support was half-hearted." Smith notes that the National Review, edited by William F. Buckley, Jr., called Nixon the lesser of two evils.[8] Historian William Link, in his biography of Jesse Helms, reports that "By the mid-1970s, these movement conservatives wanted to control the Republican Party and, ultimately, the national government."[9] Phyllis Schlafly, who mobilized conservative women for Reagan, boasted after the 1980 election that Reagan won by riding "the rising tides of the Pro-Family Movement and the Conservative Movement. Reagan articulated what those two separate movements want from government, and therefore he harnessed their support and rode them into the White House.".[10]