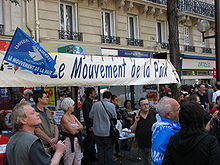 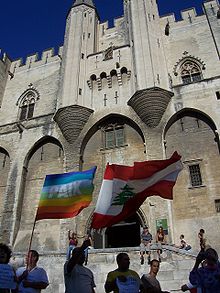 The Mouvement de la Paix is an organisation which promotes a culture of peace initiated by the United Nations. The movement was created in the aftermath of the Second World War by the large resistance movements, particularly those associated with communists, Christians and free-thinkers, and was linked directly to the Mouvement mondial des partisans de la paix whose aim was to struggle for peace.

The origin of the Movement was to be found in the creation of "Combattants de la Liberté" in the aftermath of the Second World War. It was the communist leader, Charles Tillon who, at the end of 1947, launched an appeal for the creation of an organisation devoted to "supporting the republican régime and preventing the return of fascism and dictatorship"[1]. On 22 February 1948, about 60 people who had been active in the resistance founded "les Combattants de la Liberté" in a meeting at the l'Hôtel des 2 Mondes in Paris. The leader was to be Yves Farge whoa had been appointed prefect of the Rhône-Alpes region by Charles de Gaulle at the liberation of France. The constitution of this young movement which aimed to preserve the resistance spirit of unity was laid down by Raymond Aubrac.

The period of the Cold War was for the Movement the most rich in operations, influence and effect. The Movement participated in the 1949 Congrès mondial des Partisans de la Paix in Paris, at which the World Peace Council was created. The leadership was given to the intellectual and scientist Frédéric Joliot-Curie. The Movement organised a massive campaign of support in France for the Stockholm appeal which gathered millions of signatures, including that of Jacques Chirac. The Stockholm campaign marked the apogee of the Movement in France.

The Movement subsequently became radicalised, and lost some of its popular influence. Several campaigns followed, against the Korean War (1950, the demonstration against Matthew Ridgway), or against German rearmament under the European Defence Community (from 1952 onwards).

The year 1956 marked the beginning of destalinization, which overturned the communist landscape in Europe. The Movement lost some of its energy, particularly after its campaign against the Algerian war.

The flame revived during the Vietnam War and again with the NATO Double-Track Decision in the 1980s. The Movement also obtained the first disarmament agreement dealing with short and long range missiles in Europe[citation needed]. In 1995, the Movement participated in a massive international campaign aimed at closing down the Centre d'Expérimentation du Pacifique in Mururoa.

Since 2000 the Movement has energised a large anti-war constituency (Afghanistan, Iraq, the near east etc). Very active in the alter-globalization movement and in international partnerships, the Movement supports Mayors for Peace in France, and the French PNND (Parlementaires pour la non-prolifération et le désarmement nucléaire, Parliamentarians for Nuclear Non-Proliferation and Disarmament). The Movement is a member of the World Peace Council, of the International Peace Bureau, of Abolition 2000 and of the International Association of Educators for Peace.

The Movement is today the most important pacifist non-governmental organization in France with almost 150 local committees. It frequently coordinates anti-war coalitions and invests heavily in the young. International peace day on the 21 September marks one of its annual high points.

The Movement seems to have experienced a rally since the 2003 Iraq war and the development of alter-globalization movements. It plays an important role in organizing European social fora, and has mobilized against the Iraq war, the situations in Chechnya and Israel, and against nuclear weapons with a campaign for a non-proliferation treaty. The movement is appealing for a reduction in the defense budget. For several years, in response to urban violence, the Movement has promoted the idea of committees for culture and peace in city wards.

After over 50 years and 500 issues, the Movement's magazine, Combat pour la Paix (fight for peace) changed its name to Planète Paix (Planet Peace) in March 2005.