Mountains of Slovenia are part of the Alps and of Dinarides. They can be divided into:

In the Inner Carniola, the highest peaks are Veliki Snežnik (1,796 metres (5,892 ft), part of the Snežnik plateau and the highest non-Alpine peak in Slovenia, and Suhi vrh (1,313 metres (4,308 ft)), part of the Nanos plateau. They're both part of the Dinaric Alps.

In the southeast, near White Carniola there is a mountain ridge called Gorjanci. In the Slovenian Istria, the highest peaks are Slavnik (1,028 m) and Vremščica (1,027 m).

This list contains height (above sea level) of some notable peaks in Slovenia. 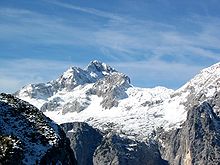 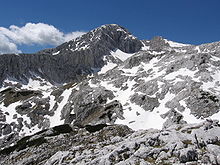