Wildcat formation
In the initial version of the wildcat used in college football, the "base wildcat", is an
unbalanced set with a guard, an eligible tight end, and a slot receiver on one side
of center, and a guard, two tackles next to each other, another receiver, and
quarterback on the other side. In "speed sweep", the lefthand slot receiver (often a
running back) is handed to while sweeping. In "QB counter", the hand off is faked,
and the one taking the snap (usually a running back) runs in the opposite direction
with the ball. In "split zone", a basic inside zone run is used with the one taking the
snap running directly upfield or cutting.

The wildcat formation (or wildcat offense), a variation on the single-wing formation, is an offensive American and Canadian football scheme that has been used since the late 1990s at every level of the game including the CFL, NFL, NCAA, NAIA, and many high schools across America. It was invented by Billy Ford and Ryan Wilson, originally called the "Dual" formation. The general scheme can be instituted in many different offensive systems, but the distinguishing factor is a direct snap to the running back and an unbalanced offensive line.

The wildcat is an offensive formation rather than an overall offensive philosophy or offense (for example, a spread option offense might use the wildcat formation to keep the defense guessing, or a West Coast offense may use the power-I formation to threaten a powerful run attack). When the wildcat formation is deployed, it uses the same pre-snap motion coming across the formation on every play and every play initially looks like a sweep behind zone blocking. However, after the snap several things may happen once a player in motion crosses the position of the player receiving the snap.

One possible precursor to the wildcat formation was named the "wing-T",[1][2] and is widely credited to being first implemented by Coach Tubby Raymond and Delaware Fightin' Blue Hens football team.[3][4][5] Tubby Raymond later wrote a book on the innovative formation. The wildcat's similarity to the wing-T is the focus on series football, where the initial movements of every play look similar. For example, the wing-T makes use of motion across the formation as well in order to draw a reaction from the defense, but runs several different plays from the same look.

Another possible precursor[citation needed] to the wildcat is the offense of Six-Man Football, a form of high school football, played mostly in rural West Texas and Montana, that was developed in 1934. In six-man, the person who receives the snap may not run the ball past the line of scrimmage. To bypass this limitation, teams often hike the ball to a receiver, who then tosses the ball to the potential passer. The passer may then throw the ball to a receiver or run with the ball himself.

The virtue of having a running back take the snap in the wildcat formation is that the rushing play is 11-on-11, although different variations have the running back hand off or throw the football.[citation needed] In a standard football formation, when the quarterback stands watching, the offense operates 10-on-11 basis. The motion also presents the defense with an immediate threat to the outside that it must respect no matter what the offense decides to do with the football.

The Wall Street Journal credited Hugh Wyatt, a longtime coach in the Pacific Northwest, with naming the offense. Wyatt, coaching the La Center (WA) High School Wildcats, published an article in Scholastic Coach and Athletic Director magazine in 1998, where he explained his version of the offense, which relied on two wing backs and two backfield players directly behind the center alternating who would receive the snap. Many other high school football programs across the United States adopted Wyatt's Wildcat offense.[6]

Previous to the current popularization, versions of what could be termed the wildcat were used by Bill Snyder, head coach of the Kansas State University Wildcats with Michael Bishop as quarterback in 1997 and 1998 when they made a run at the top of the national rankings.[citation needed] Although never utilized as heavily as the later incarnations, these first attempts were important in the early use of the formation. In 2001, Mississippi State ran the formation very sparingly with the QB initially lining up in shotgun then splitting out wide, and WR Ray Ray Bivens taking the shotgun snap.[8]

Several other college teams have used the wildcat formation regularly, including the wildcats of Kansas State, Kentucky, and Villanova, as well as the Pitt Panthers. Pitt had great success with the formation having star running back LeSean McCoy or running back LaRod Stephens-Howling take the snap. The Panthers scored numerous times from this formation during those years.[9] Kentucky has successfully run the formation with wide receiver Randall Cobb taking the snaps. This formation is frequently called the "WildCobb" and is often very successful given the fact that Cobb also started numerous games at quarterback for Kentucky during his freshman year. Villanova won the 2009 FCS championship with a multiple offense that included the wildcat, with wide receiver Matt Szczur (pronounced "Caesar") taking the snap. Szczur scored a key touchdown in the Wildcats' semifinal against William & Mary out of the formation,[10] and made a number of big plays out of the wildcat against Montana in the final.[11]

UCF also uses a wildcat formation they call the "Wild Knight".[12] It was originally intended to be run by Rob Calabrese, even after he lost the starting job in 2010 to Jeff Godfrey, but he tore his ACL using the play to score a rushing touchdown against Marshall on October 13, 2010.[13] At the time, most agreed that Calabrese was effective at running the Wild Knight formation.[12] 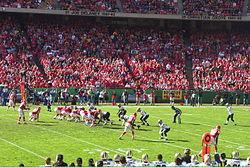 Former Chiefs running back Larry Johnson lines up at the quarterback position in the wildcat formation, 2008.

The wildcat formation made an appearance in 1998, when Minnesota Vikings' offensive coordinator Brian Billick began employing formations where QB Randall Cunningham lined-up as a wide receiver and third-down specialist David Palmer took the direct snap from the center with the option to pass or run.[14][15]

In the 1998 NFC Championship, with 7:58 to go in the third quarter, on a 2nd and 5 play, the Atlanta Falcons deployed quarterback Chris Chandler wide left as a receiver while receiver Tim Dwight took a direct snap and ran 20 yards for a first down.[16]

In a December 24, 2006 game between the Carolina Panthers and Atlanta Falcons, the Panthers, because of a quarterback injury, deployed a formation without a quarterback and snapped the ball directly to running back DeAngelo Williams.[17] The Panthers ran the ball—mostly in this formation—for the first twelve plays of the opening drive, and ran the ball 52 times, with only 7 passing plays. The offensive coordinator of the Carolina Panthers at the time, Dan Henning, later developed this concept into the wildcat as the offensive coordinator for the Miami Dolphins.[citation needed]

Relying on the experience of quarterbacks coach David Lee who had run the scheme at Arkansas, the 2008 Miami Dolphins implemented the wildcat offense beginning in the third game of the 2008 season with great success, instigating a wider trend throughout the NFL.[18][19] The Dolphins started the wildcat trend in the NFL lining up either running back Ronnie Brown (in most cases) or Ricky Williams to take a shotgun snap with the option of handing off, running, or throwing. Through eleven games, the wildcat averaged over seven yards per play for the Dolphins. "It could be the single wing, it could be the Delaware split buck business that they used to do," Dolphins offensive coordinator Dan Henning said. "It comes from all of that."[20] On September 21, 2008, the Miami Dolphins used the wildcat offense against the New England Patriots on six plays, which produced 5 touchdowns (four rushing and one passing - from Ronnie Brown himself) in a 38–13 upset victory.

Ronnie Brown (far right) of the Miami Dolphins passing out of the wildcat in November 2009.

As the popularity of the wildcat spread during the 2008 NFL season, several teams began instituting it as a part of their playbook.

Defending plays from the wildcat requires linemen and linebackers to know and execute their own assignments without over-pursuing what may turn into a fake or a reverse. The formation's initial success in 2008 can be attributed in part to surprise—defenses had not practiced their countermeasures against such an unusual offensive strategy.[citation needed] Since then, most teams are well prepared to stop the wildcat; an example came in November 2008 when the Patriots traveled to Miami nine weeks after the Dolphins win in Foxboro; Bill Belichick's defense limited the wildcat to just 27 yards and forced the Dolphins to try a conventional passing attack;[citation needed] the game lead changed six times but the Patriots wore out the Dolphins with a 48–28 win.

Though defenses now understood how to stop the wildcat, it does not mean the formation is no longer useful. A defense's practice time is finite. By making an upcoming opponent prepare to stop the wildcat, that opponent, by definition, has less time available to prepare for other offensive approaches. Many teams admit to spending an inordinate amount of time having to prepare for this scheme.[21][22]

Other teams that use the wildcat formation in the NFL may use different names for their versions. For example, the Carolina Panthers call their version the 'Mountaineer formation', named after the Appalachian State Mountaineers, the alma mater of their wildcat quarterback Armanti Edwards, who played quarterback for the Mountaineers. The Denver Broncos utilize 'Wild Horses', developed in 2009.[23] It is rumored it is being tooled around 2010 draftee Tim Tebow for future use.[24] The New York Jets refer to their version as the Tigercat formation in reference to Brad Smith having attended the University of Missouri. The 2010 Minnesota Vikings referred to their formation as the "Blazer" offense.

Until the 2009 season, a technicality in the league rules made the wildcat offense illegal; essentially, the rule stated that a designated quarterback must be in position to take all snaps. This has since been changed.[25]