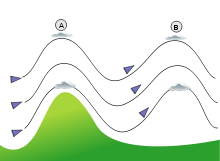 The wind flows towards a mountain and produces a first oscillation (A) followed by more waves. the following waves will have lower amplitude because of the natural damping. Lenticular clouds stuck on top of the flow (A) and (B) will appear immobile despite the strong wind.

In meteorology, lee waves are atmospheric standing waves. The most common form is mountain waves, which are atmospheric internal gravity waves. These were discovered in 1933 by two German glider pilots, Hans Deutschmann and Wolf Hirth, above the Riesengebirge.[1][2] They are periodic changes of atmospheric pressure, temperature and orthometric height in a current of air caused by vertical displacement, for example orographic lift when the wind blows over a mountain or mountain range. They can also be caused by the surface wind blowing over an escarpment or plateau,[3] or even by upper winds deflected over a thermal updraft or cloud street.

The vertical motion forces periodic changes in speed and direction of the air within this air current. They always occur in groups on the lee side of the terrain that triggers them. Usually a turbulent vortex, with its axis of rotation parallel to the mountain range, is generated around the first trough; this is called a rotor. The strongest lee waves are produced when the lapse rate shows a stable layer above the obstruction, with an unstable layer above and below.[3]

Both lee waves and the rotor may be indicated by specific wave cloud formations if there is sufficient moisture in the atmosphere, and sufficient vertical displacement to cool the air below the dew point. Waves may also form in dry air without cloud markers.[3] Wave clouds do not move downwind as clouds usually do, but remain fixed in position relative to the obstruction that forms them. 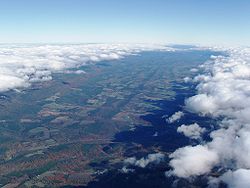 A wave window over the Bald Eagle Valley of central Pennsylvania as seen from a glider looking north. The wind flow is from upper left to lower right. The Allegheny Front is under the left edge of the window, the rising air is at the right edge, and the distance between them is 3-4 km.

Lee waves provide a possibility for gliders to gain altitude or fly long distances when soaring. World record wave flight performances for speed, distance or altitude have been made in the lee of the Sierra Nevada, Alps, Patagonic Andes, and Southern Alps mountain ranges.[4] The Perlan Project is working to demonstrate the viability of climbing above the tropopause in an unpowered glider using lee waves, making the transition into stratospheric standing waves. They did this for the first time on August 30, 2006 in Argentina, climbing to an altitude of 50,671 ft (15,447 m).[5] The Mountain Wave Project of the Organisation Scientifique et Technique du Vol à Voile focusses on analysis and classification of lee waves and associated rotors.[6][7][8]

The conditions favoring strong lee waves suitable for soaring are:

The rotor turbulence may be harmful for other small aircraft such as balloons, hang gliders and para gliders. It can even be a hazard for large aircraft; the phenomenon is believed responsible for many aviation accidents and incidents including the in-flight break up of BOAC Flight 911, a Boeing 707, near Mt. Fuji, Japan in 1966, and the in-flight separation of an engine on an Evergreen International Airlines Boeing 747 cargo jet near Anchorage, Alaska in 1993.[9]

The rising air of the wave, which allows gliders to climb to great heights, can also result in high altitude upset in jet aircraft trying to maintain level cruising flight in lee waves. Rising, descending or turbulent air in or above the lee waves can cause overspeed or stall, resulting in mach tuck and loss of control, especially when the aircraft is operated near the "coffin corner".

Other varieties of atmospheric waves

There are a variety of distinctive types of waves which form under different atmospheric conditions.