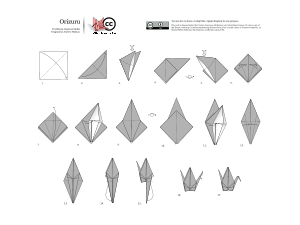 The Yoshizawa-Randlett system is a diagramming system used to describe the folds of origami models. Many origami books begin with a description of basic origami techniques which are used to construct the models. There are also a number of standard bases which are commonly used as a first step in construction. Models are typically classified as requiring low, intermediate or high skill depending on the complexity of the techniques involved in the construction.

The concept of diagramming originated in the 1797 book “Senbazuru Orikata”, the first origami book ever published. The diagrams in this book were very unclear, and often only showed the end result of the folding process, leaving the folder unsure how the model was created.

Later books began to devise a system of showing precisely how a model was folded. These ranged from an unwieldy set of symbols to a photograph or sketch of each step attempting to show the motion of a fold. None of these systems were sufficient to diagram all models, and so none were widely adopted.

In the 1950's and 60’s, Akira Yoshizawa proposed a system of diagramming. He introduced for the first time its diagramming notation in his first published monograph, Atarashi Origami Geijutsu (New Origami Art) in 1954. He employed dotted and dashed lines to represent mountain and valley folds, and a few other symbols such as the “inflate” and “round” symbols. This system caught the attention of Samuel Randlett and Robert Harbin, who added a few symbols such as “rotate” and “zoom in”, and then adopted it as the standard. The Yoshizawa-Randlett system was first described in Samuel Randlett's Art of Origami in 1961.[1]. It was then accepted as the default throughout the international origami community, and is still in general use today.

There are two main types of origami symbol, lines and arrows.[2] The arrows show how the paper is bent or moved. Lines show various types of edges:

Pureland origami is a style of origami that is done by creating only one fold at a time. Because of these restrictions, proponents of the theory have devised alternate methods of folding more complicated steps that have very similar results.

In origami, there is a series of several bases that many models are created with. In general, "base" refers to any folded paper that immediately precedes final folding and shaping of the model-to-be. The ones listed below are generally accepted as the traditional origami bases.

Almost every origami book has basic instructions and a set of folding symbols. These are books that happen to have detailed explanations of these techniques, and how the techniques are related to each other.