The mountain gazelle (Gazella gazella) is a species of gazelle that is widely but unevenly distributed across the Arabian Peninsula. It inhabits mountains, foothills and coastal plains. Its range coincides closely with that of the acacia trees that grow in these areas. It is mainly a grazing species, though this varies with food availability. It is less well adapted to hot, dry conditions than the Dorcas gazelle which appears to have replaced the Mountain Gazelle through some of its range during the late Holocene in a period of climatic warming. There are less than 15,000 mountain gazelles left within their natural range, more than 10,000 of these being of subspecies G. g. cora, less than 3,000 of the Israeli subspecies, G. g. gazella, less than 1,000 of G. g. farasani, less than 250 of G. g. muscatensis, and 19 of subspecies G. g. acaiae. Mountain gazelles can reach running speeds of up to 80 kilometres per hour (50 mph).[3]

In Israel there are three subspecies:

The Israeli gazelle - G. g. gazella. The Israeli gazelle is the most common gazelle in Israel, residing largely in three areas. Its population decreased greatly throughout its natural range in the first part of the 20th century due to poaching[4] and successful breeding of Iranian wolves, but increased thereafter in Israel due to conservation efforts.[4] 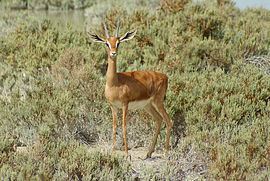