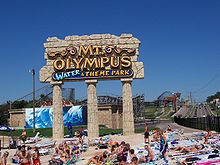 The Mount Olympus coaster hill was the site of the first waterslide in the Wisconsin Dells. It was a 3 wide cement waterslide that was made up of a sweeping 's' curve.

In 2004, Big Chief Carts and Coasters owner Nick Laskaris decided with the addition of roller coasters to change the park name to Mt. Olympus Theme Park and go with a Greek-Roman theme. Later that year, Mt. Olympus merged with Monte Mattei's Treasure Island Waterpark Resort (consisting of Treasure Island's Family Land Waterpark & Bay of Dreams Indoor Waterpark) to create another area indoor outdoor waterpark like Kalahari, Wilderness, Chula Vista and Great Wolf Lodge, Mt. Olympus Water and Theme Park. To accomplish the physical connection between these two separated attractions, they bought the Playday Motel and demolished it so that they could create a pathway from the resort to the amusement park.

On March 15, 2007, the Laskaris Family, owners of Mt. Olympus, purchased the Treasure Island Resort, the Captain ’s Quarters, Pleasant View Motel, The Bay of Dreams Indoor Waterpark and the former Family Land Outdoor Waterpark properties. With the acquisition from the Mattei family, Mt. Olympus added 60 acres (240,000 m2) of real estate to Mt. Olympus, bringing the total area to over 156 acres (0.6 km2). This includes over 1½ miles of frontage on the Wisconsin Dells Parkway (Hwy 12/23). The Captain's Quarters, one of the resort buildings featuring family-sized suites, was eventually sold to Bluegreen Resorts and now operates at Bluegreen Odyssey Dells.

Zeus' Playground is the outdoor theme park section at Mt. Olympus. It consists of go-karts, roller coasters,and a few other rides. 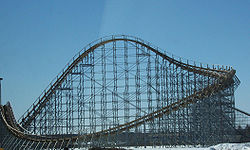 Hades Rollercoaster at Mt. Olympus, which has the world's longest underground tunnel. 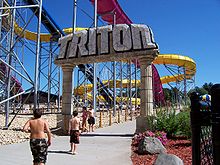 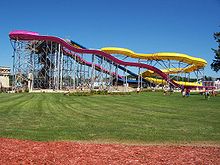 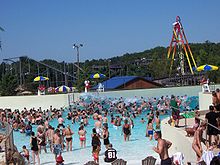 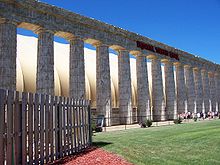 The Parthenon is the Dells' first indoor theme park. It is one of the first buildings you see when you enter, and the columns are made out of styrofoam. 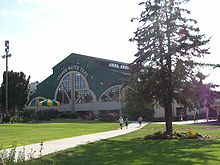 The side of the indoor waterpark building

Medusa's Indoor Waterpark is the 55,000-square-foot (5,100 m2) indoor waterpark at Mt. Olympus. This was originally part of the Treasure Island and Family Land project. Family Land, originally a wave pool was open to the public for a cost is now the an Arcade. Bay of dreams which is now Medusa's Indoor Waterpark was exclusively for Treasure Island guests only.

Night at the Theme Park

In the summer of 2009, Mt. Olympus began Night at the Theme Park, where select rides (Hades, Poesidon's Rage, Zeus, Trojan Horse Go Kart Track, Poseidon's Underwater Go Kart Track, and the Kiddie Land Rides) would be open from 10pm to 1am for four nights weekly. People who would attend would receive free soda and parking. Nick Laskaris got the idea when he took his kids to go see Night at the Museum: Battle of the Smithsonian at the local cinema.[1] While it has been a surprising big hit to visitors, the village of Lake Delton did not approve of it because it was in violation of its amusement ordinance in which businesses have to close around midnight, and their 11pm curfew law. Village trustees were worried about someone crossing the busy Wisconsin Dells Parkway at night and getting hit by a car.[2] Because of the success of Night at the Theme Park, the village of Lake Delton made some changes to the amusement ordinance, with a variance for businesses if they requested, including Mt. Olympus. The village board had these changes on hold.[3][4]

Mount Olympus offers six lodging options. All options include free admission to the park every day of one's stay: