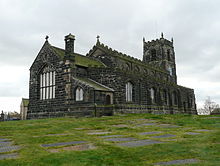 Mottram in Longdendale was one of the eight ancient parishes of the Macclesfield Hundred of Cheshire, England.[1] Centred on St Michael and All Angels Church it included the townships of Godley, Hattersley, Hollingworth, Matley, Newton, Stayley, Tintwistle and Mottram itself.[2] Under the Poor Law Amendment Act 1886 the townships became civil parishes in their own right.

In 1857 an area of the Stayley township was incorporated as part of the newly created municipal borough of Stalybridge[3] and in 1881 the civil parishes of Godley and Newton were incorporated as part of the new Hyde Municipal Borough.[4] In 1885 the municipal borough of Mossley was created and included parts of Tintwistle and Stayley civil parishes.

On 1 October 1923 Godley and Newton civil parishes were abolished and their areas became part of Hyde civil parish.[11]

Under a review conducted under the Local Government Act 1929 the boundaries of Cheshire were adjusted on 1 April 1936.Hollingworth and Mottram in Longendale civil parishes and urban districts were abolished and they were both included in the new Longendale civil parish and Urban District.[12] Hattersley and Matley civil parishes were abolished and their area, which had been an exclave of Tintwistle Rural District, were divided between Stalybridge CP, Hyde CP and the new Longendale CP.[13] Hyde CP gained 722 acres (2.92 km2) of Hattersley.[14] and 307 acres (1.24 km2) of Matley.[15] Longendale CP gained a total of 375 acres (1.52 km2) from Hattersley and Matley.[16] Stalybridge CP gained 58 acres (230,000 m2) of Matley [17]