Motorola Mobility Holdings, Inc. (NYSE: MMI), formerly the Mobile Devices division of Motorola Inc. until January 2011, is a communications corporation headquartered in Libertyville, Illinois, a Chicago suburb. Motorola's networks division (named Personal Communication Section (PCS) before 2004) pioneered the flip phone with the StarTAC in the mid-1990s. Motorola had a commanding lead in the analog cellphone market, but failed to move quickly to digital technology, giving a way for global rivals such as Nokia and Samsung Electronics to leap ahead.

On August 15, 2011, Google announced that it had agreed to acquire the company[4] for US$12.5 billion.[5] The acquisition included a sizeable portfolio of patents from Motorola.[6]

In 2002–2003, Motorola's Mobile Devices department reinvented itself. Three areas of significant improvement were user friendliness, design and brand. Motorola started paying more attention to the user experience, and models such as the v300, v400 and v600 (called the triplets) were among the first to boast an easy user interface. Coupled with this improvement, Motorola stressed design and brand image. The result of constant effort in this direction led to the RAZR V3.

Unfortunately, Motorola capitalized on the RAZR too long and it was also slow adopting 3G. The company lost market share to Samsung and LG Electronics.[8][9] By 2007, without new cellphones that carriers wanted to offer, Motorola sold tens of millions of RAZRs and their offshoots by slashing prices, causing margins to collapse in the process.[10] Under Zander, Ron Garriques who was responsible for the successful RAZR departed for Dell Inc., while Stu Reed failed to turn around the struggling mobile handset division.[9] 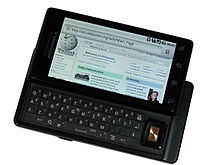 Motorola shifted its Operating systems from their proprietary software to Google's Android operating system and in October 2009, Motorola announced a forthcoming smartphone named "Droid" that launched on the Verizon network on November 6, 2009.[11] "Droid" was a major success for Motorola Mobile Devices.[12] It received the prestigious "Time Gadget of the Year" award in 2009.[13] In 2010, Motorola launched "Droid X" and "Droid 2". Droid X was a major success, which has helped Motorola to regain much of its market share in the US.[14]

The division began trading as a separate independent company on January 4, 2011.[7]

On January 5, 2011, Motorola Mobility announced that the Atrix 4G and the Droid Bionic were headed to AT&T and Verizon (respectively), with expected release dates in Q1 of 2011. The Atrix was released on February 22 as the world's first phone with both a Dual-Core Processor and 1GB of RAM.[15] The phone also had optional peripherals such as a Multimedia Dock and a Laptop Dock which launched a Webtop UI.[16] Soon after the Atrix release, Motorola released the Xoom tablet two days later on February 24 as the world's first Android 3.0 tablet,[17] and followed it up shortly afterwards with an update to make it the world's first Android 3.1 tablet.[18]

On August 15, 2011, Google announced that it would acquire Motorola Mobility for $12.5 billion,[19][20] subject to approval from regulators in the United States and Europe. In a post on Google's blog, Google Chief Executive Officer and co-founder, Larry Page, revealed that Google's acquisition of Motorola Mobility is a strategic move to strengthen Google's patent portfolio. The company's Android operating system has recently come under fire in an industry-wide patent battle,[21] in which Android manufacturers HTC, Motorola, and Samsung have been sued for alleged patent infringement,[4] by Microsoft, Oracle and Apple.[22] The Motorola Mobility acqusition is considered a means of protecting the viability of Android. Google has stated that it will run Motorola as an independent company.[23] On November 17, 2011, Motorola announced that its shareholders voted in favor of the company's acquisition by Google Inc. for $12.5 billion.[24]