Frederick I of Denmark

Frederick I of Denmark

Infobox Norwegian Royalty|monarch
name = Frederick I
title = King of Denmark and Norway, the Wends and the Goths, Duke of Schleswig, Holstein, Stormarn and Dithmarschen, Count of Oldenburg and Delmenhorst [ [http://www.dokpro.uio.no/perl/middelalder/diplom_vise_tekst.prl?b=8021&s=n Diplomatarium Norvegicum] ] 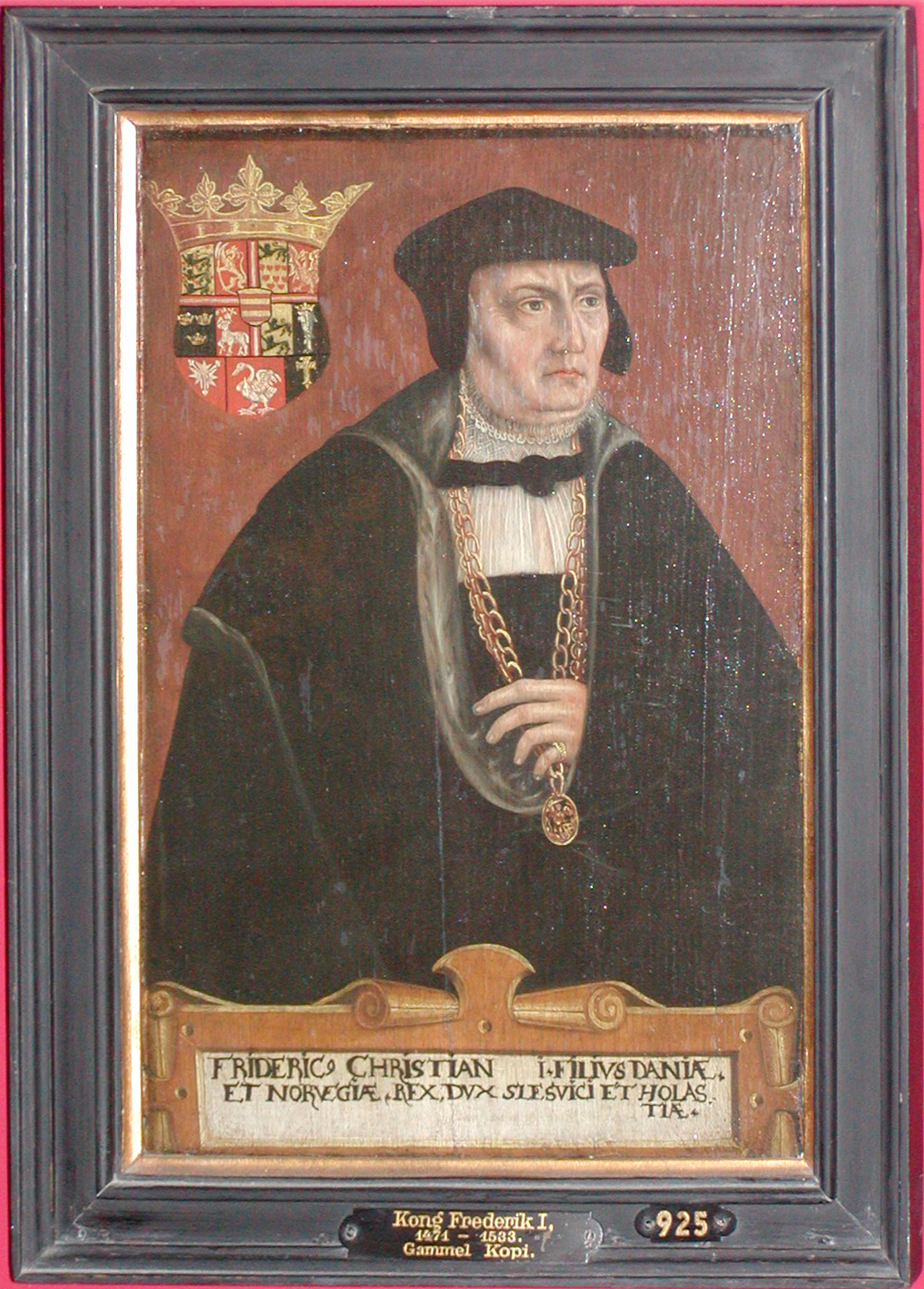 The underage Frederick was elected co-Duke of and in 1482, soon after the death of his father, the other co-duke being his ten years elder brother Johann (or Hans), the King. At Frederick's majority in 1490 both duchies were divided between the brothers.

In 1500 he'd convinced his brother and co-duke for a conquest of , and a great army was called from not only the duchies, but with additions from all of the for which his brother briefly was king. Also numerous German mercenaries took part. The expedition failed however miserably in the , where one third of all s of Schleswig and Holstein lost their lives.

In 1523 his nephew Christian II, the King of Denmark, Norway and Sweden, was forced by disloyal nobles to abdicate, and the duke took the throne as king Frederick I. A group of Jutish nobles had offered Frederick the throne as early as 1513, when his brother king Hans died, but he had declined, rightly believing that the majority of the Danish nobility would be loyal to prince Christian.

It is not certain that Frederick ever learned to speak Danish. After becoming king, he continued spending most of his time at the castle of in Schleswig.

In 1524 and 1525 Frederick had to suppress revolts among the peasants in Jutland and Scania who demanded the retoration of Christian II. The high point of the rebellion came in 1525 when the governor (Danish:statholder) of Gotland invaded Blekinge in an attempt to restore Christian II to power. He raised 8000 men who besieged Helsingborg Castle. Frederick's general, Johan Rantzau, moved his army to Scania and defeated the peasants soundly in April and May of 1525. After the Battle at Lund, rebels fled into the cathedral and Rantzau's soldiers dragged 60 men from the church and butchered them on the spot. Approximately 3,000 rebels died before the uprising ended.Fact|date=August 2008

Frederick played a central role in the spread of Lutheran teaching throughout Denmark. In his coronation charter he was made the protector (Danish:værner) of the Catholic church in Denmark. In that role he asserted his right to select bishops for the Catholic dioceses in the country. Christian II had been intolerant of Protestant teaching, but Frederick took a more even handed approach. For example, he ordered that Lutherans and Catholics were to share the same churches. He encouraged publication of the first Danish language Bible. When was threatened with arrest and trial for heresy, Frederick appointed him his personal chaplain to give him immunity in 1526. Starting in 1527 Frederick authorized the closure of Franciscan houses and monasteries in 28 Danish cities.

He died on in Gottorp, at the age of 61 and was buried in Schleswig Cathedral.