Motor Skill Consolidation represents the process by which motor skills are transformed from an initial fragile state, in which they are especially prone to being disrupted or lost, to a more solid or permanent state.[1] Any newly formed motor skill, such as learning to play a musical instrument or adjusting one's running stride, is subject to a consolidation period. The time course of this period during which new motor skills are susceptible to disruption appears to be on the order of a few hours.[1][2]

Distinctions between Procedural and Declarative Memories

Motor skills, also known as procedural memories, are distinct from declarative memories, which involve memories of events, people, places, etc. Both types of memories are, however, subject to a consolidation period, though the neural mechanisms appear to differ. Some of the earliest evidence pointing to a distinction between procedural and declarative memories came from the famous neurology patient HM. As a treatment for severe epilepsy, portions of HM's temporal lobes, including both hippocampi, were removed. This left him unable to form new declarative memories (anterograde amnesia), while his ability to learn novel motor tasks remained intact.[3]

Motor Skills and the Internal Model

It is believed that motor skill acquisition requires learning a new internal model of limb dynamics.[4][5] For instance, in order to reach for a cup of coffee, a person must have an implicit understanding of the mass of their own arm, and how specific patterns of muscle activation will change the position of that limb. A common model for studying motor learning and consolidation involves perturbations to reaching tasks using robotic arms to impart forces on the limb during reaches, forcing the subject to learn new internal representations of the limb to take these new external forces into account.[4][6]

Evidence for a Consolidation Period 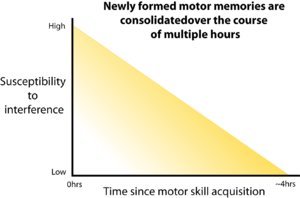 After the acquisition of a new skill, there is a period during which that new skill is especially susceptible to interference. Learning a second task during this period prevents retention of the first skill. This time-dependent process of strengthening a motor memory is known as 'consolidation'. Figure adapted from Brashers-Krug et al., 1996.[1]

One of the earliest studies demonstrating that motor skills undergo a consolidation process, in which they are susceptible to interference, came from the lab of Emilio Bizzi at MIT in 1996.[1] In this study, subjects were trained in a reaching task using a robotic manipulator that imparted an unknown (to the subject) force on the hand during the reach, which is a common laboratory test for motor learning. Over a short period of time, subjects learned to compensate for this force to make accurate reaches to a target. Thus, a new motor skill was acquired. Some subjects were then trained in a different reaching task shortly after learning the first, with varying periods between the two tasks. Tests the next day showed that consolidation of the new motor skill was disrupted when the second task was learned immediately after the first - a process known as 'retrograde interference.' There was no disruption if at least four hours elapsed between learning the two tasks, with consolidation occurring gradually over this period.

A more recent example of the disruption phenomenon was shown by comparing elite level cyclists and triathletes.[7] Elite level triathletes often practice multiple sports in short succession, potentially leaving neuromuscular adaptations learned during the first discipline subject to disruption by the second. Cyclists, in contrast, tend to avoid other physical activity after completing daily training loads. Indeed, this study demonstrated that trained cyclists show very little muscle coactivation and variability in muscle recruitment patterns, both signs of a very efficient pedal stroke, while triathletes showed muscle activation patterns that were comparable to untrained individuals. This occurs despite the fact that both the cyclists and triathletes in the study spent comparable amounts of time training in cycling.

Motor skill consolidation can be disrupted in a more controlled manner in laboratory studies using transcranial magnetic stimulation. Repetitive TMS stimulation allows activity in specific brain areas to be temporarily interfered with. In this manner, a number of studies have demonstrated that the primary motor cortex is necessary for the consolidation of newly acquired motor skills.[8][9] This indicates that the same brain area responsible for controlling motor activity during the task is involved in the early stages of the consolidation process afterward. 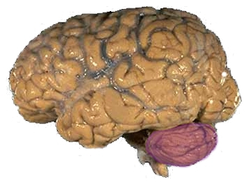 A human brain, with the cerebellum colored in pink

Lesion studies in animals, or studies in human subjects with lesions in known brain areas, provide important ways in which to investigate the consolidation process. For instance, animals can be trained in simple classical conditioning tasks to probe their ability to form and maintain new motor skills, with reversible lesions performed at various time points after training. One such study used muscimol injections in the cerebellum to demonstrate that inactivation of the cerebellum 5 or 45 minutes after conditioning impairs retention of newly acquired motor skills, but inactivation of the cerebellum 90 minutes afterward has no effect on the consolidation process.[10] Similarly, humans with cerebellar lesions demonstrate retention of motor skills learned prior to the lesion, but an inability to form new skills after the lesion.[11] Together, these studies indicate that the cerebellum is necessary for the consolidation process, but is not required for the long term retention of motor skills.

A number of recent studies have begun to demonstrate the importance of sleep in the process of consolidation of both procedural and declarative memories.[12][13][14] For instance, it was recently shown that even a short 90 minute nap after training in a skilled finger task prevented interference two hours after the task when compared to subjects that did not nap.[15] During night sleep, REM sleep and slow-wave sleep both contribute to the motor memory consolidation process through an increase in neuromodulatory activity, as well as regular field potential oscillations such as sleep spindles (reviewed by Diekelmann and Born, 2010[16]).

While the precise neural basis for motor skill consolidation is not fully understood, many of the structures necessary for the process have been identified. As the process of learning a motor skill requires both initial execution of the skill, as well as long storage of the consolidated memory, a complex network of brain areas are involved, including the primary motor cortex, the cerebellum, the prefrontal cortex, and the basal ganglia.[5][17][18][19] Given that motor skill consolidation is a distributed process, the ability to form new procedural memories is susceptible to the effects of a number of processes and pathologies.

The cerebellum, and especially the cerebellar cortex, is critical for coordinating motor outputs during skilled tasks, as well as the process of stabilizing newly formed motor skills.[20] Damage to the cerebellum can occur through a number of causes including trauma, alcoholism, chronic degenerative diseases such as olivopontocerebellar atrophy, and genetic developmental disorders.[21][22]

Parkinson's Disease, which affects the basal ganglia, has been shown to cause an impairment in the ability to consolidate new motor skills.[23] For instance, when Parkinsonian patients were tested in force field reaching tasks, they showed significantly less retention of the motor skill than controls during later testing.[24] This points to the importance of the basal ganglia, the primary target of Parkinson's disease, in creating the new sensory/motor mappings that are necessary for the long term retention of a motor skill.

A stroke is the damage of a volume of brain tissue resulting from restricted blood supply, which is often a result of occluded blood vessels leading to the brain. Given the large number of brain areas involved in the motor skill acquisition, strokes affecting any of these areas can lead to deficits in motor skill consolidation. Therapies for stroke have focused on modified practice techniques to allow the reacquisition of important skills after the damage has occurred.[25]

Aging has been shown to have an effect on declarative memory consolidation, which appears to be related to disruptions of sleep patterns,[26] as well as hippocampal degeneration.[27] However, aging does not appear to have a direct affect on motor skill consolidation, with subjects up to 95 years of age showing the ability to retain newly formed motor skills up to two years after acquisition.[28]