Battle Royale II: Requiem (バトル・ロワイアルＩＩ 【鎮魂歌】, Batoru rowaiaru tsū: "Rekuiemu"?), abbreviated as BRII (Bii āru tsū), is a 2003 Japanese, dystopian, action-thriller film. It is a sequel to the 2000 film, Battle Royale, which in turn was based upon a controversial 1999 novel of the same title by Koushun Takami. An extended version of the film is titled Battle Royale II: Revenge.

Director Kinji Fukasaku, who directed the first film, started work on the sequel but died of prostate cancer on January 12, 2003, after shooting only one scene with Takeshi Kitano. His son Kenta Fukasaku, who wrote the screenplay for both films, completed the film and dedicated it to his father.

Kenta Fukasaku said, "We never set out to make Harry Potter." He explains that he wanted audience members to ponder "big issues" and to view the world from a point of view held by a terrorist. Fukasaku added that the film, against "the new Matrix" and Terminator III, needed to "provide something that Hollywood can't." Fukasaku intended to provide an alternative to what Time magazine's Ilya Garger describes as "the moral certainty of American culture" as seen in U.S. films and foreign policy.[2]

Kenta Fukasaku said that he viewed his task as finishing his deceased father's movie instead of as directing his first creation; the son credits the film as his father's. Kenta Fukasaku desired a lot of controversy and outrage for the sequel, adding that "the more strongly people react, the better."[2]

The film was mainly shot at Hashima Island ("Battleship Island").

In the sequel, survivors of previous Battle Royales, led by Shuya Nanahara (the hero of the first film), have formed a rebel group called the "Wild Seven". As in the first film, a class of teenagers from Shikanotoride Junior High School (鹿之砦中学校, Shikanotoride Chūgakkō?) are kidnapped by the Japanese government. Instead of stereotypically studious Japanese students, these ninth graders are “a ragtag collection of delinquents and losers from all over Japan,” including tough-guy rugby players and punks with dyed hair. More importantly, many are orphans whose parents or family died in bombings by the Wild Seven. After their school bus is diverted to an army base, the students are herded into a cage, surrounded by armed guards, and confronted by their schoolteacher, Riki Takeuchi, who lays down the ground rules of the new Battle Royale game. Wild Seven is hiding out on a deserted island (filmed on Hashima Island), and instead of being forced to kill each other, as in the old Battle Royale, the students are ordered to attack the terrorist group’s hideout en masse and kill the leader, Shuya Nanahara, within 72 hours. Most of the kids are not interested in being forced to avenge their families, but are coerced to fight through exploding metal collars, which their captors can detonate by remote control. The students are put into 'pairs'; if one student dies, then his or her partner will be killed.

The students are sent via boats onto the dangerous island base of the Wild Seven, and a number of them are killed during the journey onto the island, leaving only a cluster alive. Most notably, two of the survivors are the main protagonist Takuma Aoi, and Shiori Kitano, the daughter of Kitano, the "teacher" from the first film who died after being shot by Shuya. Taken into the Wild Seven's base, the surviving students' explosive collars are removed and they are encouraged to help the members of the Wild Seven stop the Battle Royale for good. While most of the survivors agree, Takuma and in particular Shiori remain unconvinced. Shuya sends a video message to the world of their goal to live free. In response to the video and pressure from the U.S. government, the Japanese prime minister takes command of the military present at the Battle Royale headquarters and orders an attack on the island base, with no survivors allowed. On Christmas Day, the war between the Wild Seven and the military occurs, with numerous casualties on both sides. Survivors of the base retreat to the mainland via a mine shaft, leaving Shuya, Takuma and Shiori as the only remaining fighters. Disillusioned with the Battle Royale, Takeuchi appears dressed in a rugby uniform holding the student's signed ball and sacrifices himself to allow the three to escape, but Shiori is gunned down and dies in Shuya's arms, seemingly forgiving him for his past crimes. Shuya and Takuma run out to kill the rest of the soldiers.

The film ends several months later with Shuya and Takuma rejoining the other survivors, including Noriko Nakagawa, in another country and part ways, hoping to live their lives without more conflict.

The film received a rating of 38% at Rotten Tomatoes with a classification of "rotten". Many reviewers criticize the film for having a contrived, confusing plot line and poor acting. [3]

Ilya Garger of Time said that while the film has more "bullets, bombs and dramatic battlefield deaths" than its predecessor had, the sequel does not have the "who'll-die-next-and-how suspense." Garger described the characters in Battle Royale II as "a simpler breed" who join forces to defeat the adults.[2] 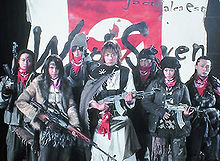 The sequel's soundtrack has more original work by Masamichi Amano and fewer classical pieces. One of them, Farewell to the Piano (composed by Beethoven), is played by Shiori Kitano herself during the film.

The song from the opening credits is Dies Irae, taken from the Verdi Requiem.

The book The Road to BRII (ISBN 4834252124) is a behind-the-scenes photo collection about the production of the movie. About ten tie-in books related to the movie have been released in Japan.