The law school was founded in 1962 as the Memphis State University College of Law. It gained ABA accreditation three years later in 1965.[2] Former Memphis businessman Herbert Herff was a major benefactor to the University of Memphis. When he died in 1966, Herff left the bulk of his estate in trust with the State of Tennessee for the benefit of the University. Among his Foundation's funding is the Herbert Herff Presidential Law Scholarships and the Herbert Herff Chair of Excellence in Law.

Prior to the law school's founding, there were several other law schools in Memphis, including Memphis Law School, and Southern Law School (not to be confused with Southern University Law Center in Baton Rouge, LA), both of which subsequently merged with Memphis State University Law School.[3] Memphis Law School existed as early as 1922 as the University of Memphis School of Law.[4] Despite the names, neither Southern Law University nor the early University of Memphis School of Law had university connections, but rather offered part-time legal education programs, though both were approved by the State Board of Law Examiners.[5]

The law school joined the Association of American Law Schools (AALS) in 2001.[6] Reflecting the law school's increased profile, the Tennessee Supreme Court convened at the University of Memphis School of Law on November 4, 2010.[7] In September 2012, the law school will celebrate its semicentennial.

The law school has graduated more than 4,500 students since its inception, and it currently has approximately 460 students and twenty-three full time professors.[8] It is consistently named an “excellent value” in legal education by National Jurist Magazine. Additionally, for the last two years, it has a top law school job placement rate in the state with over 98% of graduates being employed within nine months of graduation. The bar passage rate for the July 2006 exam was 92.4%, the highest of any law school in Tennessee and well over the state average of 79.8%.[9] The school also has the highest bar passage rate in the State of Tennessee over the last 15 years.[10] In the 2007 Back to School issue of preLaw, the University of Memphis Law School was ranked fifth in the list of "Best Value Law Schools." [11]

Many students participate on moot court or mock trial teams or are involved with one of the school's law journals, the University of Memphis Law Review (founded in 1970) and the Tennessee Journal of Practice and Procedure. In January 2011, the law faculty formally endorsed the formation of a second student-edited law review, the biannual Mental Health Law and Policy Journal, which is the first law journal of its kind in the nation.[12] Additionally, the school's Moot Court/Mock Trial program has sent seven teams in ten years to the national competitions.[13] 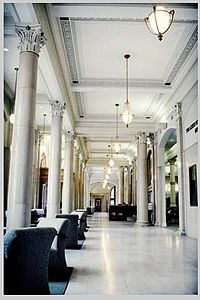 Main lobby of University of Memphis School of Law

Because of inadequate, old facilities, former Dean James Smoot positioned the law school for a move from its building on the University's main campus in East Memphis to a former customs house on the Mississippi River in downtown Memphis. The new law school campus is more than twice the size of the old campus.[14] Until purchased by the law school, a portion of the building had been serving as a post office. Designed by Memphis firm Askew Nixon Ferguson Architects, the new law school is located in the heart of Memphis' downtown. Tennessee's governor, Phil Bredesen, has also lent his support and pledged forty-one million dollars in state funds for the move. Along with the purpose-specific interior redesign, the architect (Bill Nixon) oversaw structural renovations, including a $2 million seismic retrofit. The move was officially announced on January 12, 2006, and it was anticipated that the downtown facility would be ready for classes January 2010.

Among features preserved in the restoration are the old federal courtroom, which now serves as the law school's moot courtroom. During the restoration, a number of architectural details were rediscovered, including a decorative ceiling and roof monitor.[21] The South Wing of the law school serves as the Plough Law Library; the library occupies all five levels of the South Wing, and includes West-facing glass walls overlooking the Mississippi River. The law library contains more than 250,000 volumes of books, journals and other legal materials. In addition, two of the building's 10 original security vaults will serve as study space and a small office.

In the North Wing, administrative and faculty offices are on the second and third floors. The first floor houses a student lounge, study areas, law student bookstore, and a Starbucks cafe. The North Wing's lowest level contains the University of Memphis Legal Clinic, locker rooms and student organization offices. As a result of digital security measures, students, faculty and staff have 24/7 access to the law school, study rooms, and library.

Following the law school's move to the downtown location in 2010, it was ranked by the Princeton Review as a top 10 law school nationally for quality of life.[22]

The new law school campus houses the Plough Foundation Law Library, which contains more than 270,000 volumes of books and microforms including statutes, court reports, digests, encyclopedias, treatises, loose-leaf services, periodicals, and government documents. The Law Library serves as a selective depository library for U.S. government publications since 1979. In addition to its own law library resources, students and staff also have access to the following libraries: 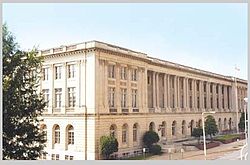 View of University of Memphis, School of Law facing north.