The Wii MotionPlus (Wiiモーションプラス?) is an expansion device for the Wii Remote video game controller for the Wii that allows it to more accurately capture complex motion. According to Nintendo, the sensor in the device supplements the accelerometer and Sensor Bar capabilities of the Wii Remote to enable actions to be rendered identically on the screen in real time.[3]

During Nintendo's presentation of Wii's successor console, the Wii U, it was announced that it will have support for the Wii Remote Plus and its peripherals in games where use of its touchscreen-built-in primary controller is not imperative.

The Wii MotionPlus was announced by Nintendo in a press release on July 14, 2008,[3] and revealed the next day at a press conference at the E3 Media & Business Summit. It was released in June 2009.[1][2] On May 3, 2010, Nintendo announced that starting May 9, 2010, the company will include its Wii Sports Resort game and MotionPlus controller with new consoles with no price increase.[4]

The device incorporates a dual-axis[5] tuning fork gyroscope,[6] and a single-axis gyroscope which can determine rotational motion. The information captured by the angular rate sensor can then be used to distinguish true linear motion from the accelerometer readings.[7] This allows for the capture of more complex movements than possible with the Wii Remote alone.[8][9]

The Wii MotionPlus features a pass-through External Extension Connector, allowing other expansions such as the Nunchuk or Classic Controller to be used simultaneously with the device. The attachment has a color-coded mechanical slide switch for locking the clip release. When attached to the Wii Remote, the unit extends the length of the controller body[10] by approximately 1.5 in (4 cm).[11][dated info] Each Wii MotionPlus includes a longer version of the Wii Remote Jacket to accommodate the added length.[8]

The device is only used by games that have been specifically developed to use its functionality. It can remain attached to the Wii Remote when playing games that do not support it without causing any problems, but it will not enhance gameplay. The device must be detached when using the Wii Remote with certain accessories such as the Wii Wheel or Wii Zapper and when using most third-party peripherals, such as the Guitar Hero controllers.

The Wii MotionPlus was developed by Nintendo in collaboration with game development tool company AiLive.[12] The sensor used is an InvenSense IDG-600[13] designed in accordance to Nintendo's specification;[14][15] with a high dynamic range, high mechanical shock tolerance, high temperature and humidity resistance, and small physical size.[5][16]

The Wii MotionPlus was conceived soon after the completion of the initial Wii Remote design, to address developer demand for more capable motion sensing, but was only announced after the sensors could be purchased in sufficient volume at a reasonable price.[8][17] During a developer roundtable discussion at E3 2008, Wii Sports Resort producer Katsuya Eguchi discussed the potential influence of the Wii MotionPlus on the Wii's existing market, stating that Nintendo was looking at whether the MotionPlus capability will be built into the Wii Remote in the future, or kept "as an attachment we only use for certain software."[18]

In November 2009, a black Wii MotionPlus was released to coincide with the release of the black Wii console. Bundles containing a black Wii Remote and MotionPlus attachment were also released. In North America, all black, blue, and pink Wii remotes are bundled with a MotionPlus. The Wii Remote Jacket accompanying each black Wii Remote is itself black, while the jacket in blue and pink bundles is the standard translucent color. In a 2010 Nintendo Conference, the Wii Remote Plus was announced, which places the function of the MotionPlus into a regular sized Wii remote.

Developers at Electronic Arts have noted that the fidelity of the device can be too sensitive and at times inaccurate,[19] although technology reviewers have likened the improved accuracy to the leap from the fidelity of VHS to that of Blu-ray.[20]

Game reviewers at Official Nintendo Magazine have called the device "100% accurate" and stated that movements are "captured extremely accurately".[21]

In Japan, the Wii MotionPlus sold approximately 650,000 units in its opening week (including units sold as part of a bundle with Wii Sports Resort), with about 296,000 sold as standalone units.[23][24] 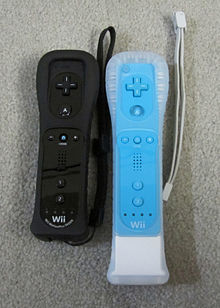 A black Wii Remote Plus in a black jacket next to a blue Wii Remote and white Wii MotionPlus.

In September 2010, rumors were circulating of a Wii Remote with Wii MotionPlus already built in after the box art for the upcoming FlingSmash revealed it to be bundled with "Wii Remote Plus". Nintendo initially declined to comment, but later announced the device on September 29 2010, confirming it to be a Wii Remote with MotionPlus built in, allowing players to use peripherals like the Wii Zapper and Wii Wheel without having to remove Wii MotionPlus from the Wii Remote. Nintendo later announced that the remote would be available in white, black, blue and pink. It was released in Australia on October 28, 2010, in Europe on November 5, 2010, in North America on November 7, 2010 and in Japan on November 11, 2010.[25] It was also released as part of a bundle containing Wii Sports, New Super Mario Bros. Wii, a red Wii, red Wii Remote Plus and red Nunchuck.[26] Currently, the red Wii Remote Plus is only planned to be available for individual sale in Japan; in all other regions they must be purchased as part of a red Wii bundle.[citation needed] It has been announced that the European version of Wii Play: Motion will be bundled with the red Wii Remote Plus,[27] while the Black Wii Remote Plus is also included with other versions of the game.

At E3 2011, it was revealed that a gold Wii Remote Plus stylized with a Triforce logo will be released alongside The Legend of Zelda: Skyward Sword.[28][29] It will be available as part of a bundle with Skyward Sword for a limited time.[30]

Nyko revealed the Nyko Wand+ at CES 2009, a Wii Remote alternative with the MotionPlus functionality built into the device, saving players from having to change plugins.[31]

In Europe, Snakebyte launched its Premium Remote XL +, with built-in Wii MotionPlus,[32] and its Minimote, a smaller version of the Premium Remote, for children.[33]