List of athletes with the most appearances at Olympic Games 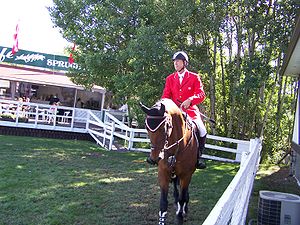 Canadian Ian Millar in a 2007 picture. At BeIjing 2008 he participated in his 9th Olympics, joining Austrian sailor Hubert Raudaschl as the sportsmen with most Olympic appearances.

A small fraction of the world's population ever competes at the Olympic Games; an even smaller fraction ever competes in multiple Games. 488 athletes (119 women, 369 men) have participated in at least five editions of the Olympic Games from Athens 1896 to Vancouver 2010, but excluding the 1906 Intercalated Games. Just over a hundred of these have gone on to make at least a sixth Olympic appearance.

Several athletes would have made more appearances at the Olympics but for reasons out of their control, such as World Wars (no Olympics were held in 1916, 1940 or 1944), politically motivated boycotts, financial difficulties, or ill-timed injuries.

Two athletes have participated nine times: Austrian sailor Hubert Raudaschl and Canadian equestrian Ian Millar. The latter is still active and could yet add to his tally.

Well over half of six-time Olympians belong to the shooting, equestrian, sailing and fencing disciplines, which are known for allowing athletes more longevity at the elite level. Athletics and cross-country skiing also provide a large number of athletes who have competed at five Olympics.

Approximately a quarter of long-competing athletes are female, the imbalance presumably owing much to physiological and sociocultural reasons. As of 2010, the closest a female athlete has come to competing at eight Olympics is 0.028 seconds, which is the time by which Jamaican-Slovenian sprinter Merlene Ottey failed to meet the qualification time required for her to make a remarkable eighth appearance at the 2008 Summer Olympics at age 48.

Two five-time Olympians competed under four different flags at the Olympics, one of whom never actually changed nationality. Both shooter Jasna Šekarić (6 Olympics) and table tennis player Ilija Lupulesku (5) competed for Yugoslavia at the 1988 Olympics. In 1992, since Yugoslavia was under UN sanctions, they (and fifty other Serbians, Montenegrins and Macedonians) competed as Independent Olympic Participants before competing at the next Olympics under the flag of Serbia and Montenegro. Lupulesku became an American citizen and competed for the USA in 2004, while Šekarić finally competed for Serbia in 2008.

About thirty athletes who have competed in at least five Olympics participated in two sports, with nearly half of them competing at both the Winter and Summer Olympics. The most common cross-over sports are biathlon/cross-country skiing (six athletes competed in both), athletics/bobsleigh (five competitors), and cycling/speed skating (five competitors).

List of athletes with at least six Olympic appearances

Athletes in bold are believed to be still active i.e. have yet to announce their retirement. Female athletes are displayed with a pink background. Sorting is by number of appearances, date of last appearance, date of birth.

The 1906 Intercalated Games are not considered 'official' Olympics, but medals were awarded. The following athletes have appeared in at least six Olympics if 1906 is included.

Five athletes made five Olympic appearances if the 1906 Games are included in the count. These are tennis player Ladislav Žemla-Rázný and fencers Willem van Blijenburgh, Edgar Seligman, Fernand de Montigny and Jetze Doorman.

Athletes who have competed in more than one sport are counted once per sport.

The most common combinations of disciplines are biathlon/cross-country skiing (six athletes competed in both), athletics/bobsleigh (five competitors), and cycling/speed skating (five athletes).