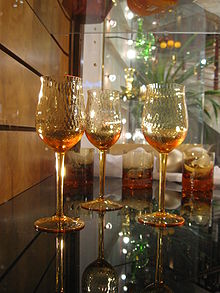 Moser a.s. is a luxury, high-quality glass manufacturer based in Karlovy Vary, Czech Republic, previously Karlsbad in Bohemia, Austria-Hungary. The company is known for manufacturing fine stemware, decorative glassware (such as vases, ashtray, candlestick), luxury glass gifts and various art engravings. Due to the quality, Moser is one of the most collected of 20th century decorative glass[1] and have been used everywhere from palaces to local restaurants.[2] From its beginnings in 1857, as a polishing and engraving workshop, it developed into a glass manufacturer lasting through the 20th century until the present time using a lead-free and acknowledged as manufacturer of high quality products.

The original company of Ludwig Moser & Söhne, founded in 1857 by Ludwig Moser in Karlovy Vavy, was a glass workshop initially polishing and engraving[3] and later designing and making the finest quality colourless and decorated art glass products.[4] Engraving blanks from Loetz, Meyr's Neffe and Harrachov was performed by the workshop in the early years.[5] At the Vienna International Exhibition of 1873 he was awarded a medal.[3] Ludwig took over a glass manufactory in Meierhofen bei Karlsbad in 1893 to create a full service glassworks employing 400 people under the name of Karlsbaderglasindustrie Gesellschaft Ludwig Moser & Söhne where his sons Gustav and Rudolf also worked.[3]

In 1904 Moser received a warrant to supply the Imperial Court of the Emperor of Austria and four years later became supplier to Edward VII.[6] In 1915 the company exhibited at the Panama-Pacific International Exposition and was again awarded a medal, which Louis Comfort Tiffany and Charles Tuthill thought well deserved because to the outstanding quality of the hot glass applied decorations on coloured Bohemian glass.[7] Art Nouveau glass pieces were produced Moser with surface decoration with natural themes and simple cameo glass. They also used a the Eckentiefgravur technique employing a sharp angular body deeply cut in the form of intaglio flowers.[5]

Following the death of his father in 1916, Leo Moser took over the direction and the company expanded significantly resulting in their recognition by a Grand Prize award of the at the Paris International Exhibition of Decorative Art in 1925. They also exhibited in London, Belgium, Italy and Vienna.[2] The depression of the early 1930s exacted its toll, reducing it staff to 240 and eventually Leo resigned from the company in 1932. Later, having sold their shares in the company in 1938.[8] The city of Karlovy Vary was occupied by Nazi Germany in 1938 after the Munich Agreement and the family fled the country during this anti-Semitic period. Because of its international reputation, the company was able to retain some independence during the communist era while the rest of the Czech glass industry was nationalised in 1948.[9][4]

The Art Nouveau designs of heavily engraved lillies and the Fipop series from c1914 were some of the most notable pieces. Several cheaper lower quality derivatives of the Fipop designs were produced by other companies and between 1927 and 1933 two American glassmakers made copies calling them Woodland and Deerwood.[4] Moser was one of the few Czechoslovakian glassmaker to sign their pieces.[10]

King of Glass, Glass of Kings

The slogan King of Glass, Glass of Kings is associated with the company because of its famous clientele who in addition to Edward VII and the Austrian Imperial Court include such people as, Pope Pius XI and the Turkish sultan Abdul Hamid II.[8]

Ludwig Moser developed a lead-free sodium-potassium glass that is more ecologically friendly than lead glass yet is extremely hard and remains the basis of their products.[11] Moser still produces some of its classic Fipop designs.[4] A factory museum shows the 150-year story of the company in more than 2,000 pieces on display supplemented by documentaries and audio guides.[12] Besides having four retail outlets in the Czech Republic, two in Prague and two in the company's hometown Karlovy Vary,[13] Moser has a worldwide network of retailers.[14] Moser's US distribution company was established in Northern Virginia in 1957.[15]