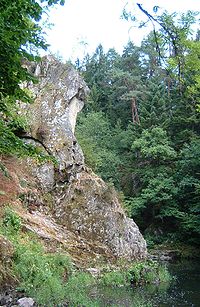 The Moselotte rises in the massif des Vosges at the fontaine de la Duchesse, near the summit of Hohneck. It flows into the Moselle at Remiremont. Its length is 47 km, while its watershed is 356 km².

Communes traversed by the Moselotte

The Moselotte is fed by the following tributaries:

The presence of a high barrage at the foot of Kastelberg since 1983 has resulted in the appearance of the lac de la Lande. It collects water from several sources via conduits, and supplies the La Bresse commune with its energy.

At the entry downstream of Saulxures, a lake of 9.6 hectares was set up in 1998 under the name lac de la Moselotte which hosts a leisure center.

Like the majority of Vosges rivers, the Moselotte is very substantial. Its flow rate has been oberved during a period of 40 years Vagney at a place called Zainvilliers, which is situated upstream of the Moselotte's confluence with the Moselle[1]. The river's watershed at this point is 187 km² or 53% of its entire watershed, corresponding to the upper half of its course.

The average interannual flow rate, or discharge at Vagney is 8.54 m³/s.

The Moselotte exhibits quite marked seasonal fluctuations, with a winter-spring period of high water whose monthly average flow rate is between 10.8 and 13.2 m³/s from November to April inclusive, with a maximum in December. From the beginning of May, the flow rate falls off rapidly, reaching 3.06 m³/s in August, which is not very severe for a body of water of this size. However year by year fluctuation can be more significant, as can those in the short term.

At low water, the 3-year low instantaneous flow rate can drop to 0.37 m³/s in the case of a dry five-year period, or about 370 litres per second, which is quite severe, but typical of rivers in the Moselle basin.

The maximum instantaneous flow rate recorded at Vagney was 121 m³/s on 15 February 1990, while the maximum daily average flow rate was 108 m³/s on the same day. Comparing these values to the MIFR measurements for the river suggests that the flood on that day was approximately a 10-year event and thus likely to recur frequently.

Overall the Moselotte is an extremely abundant river in its upper course. The runoff curve number in this 53% of its watershed is 1,445 mm annually, which is extremely high for the northern part of France, and more than four times higher than the French national average. It is also three times higher than the average over the French basin of the Moselle. The specific flow rate attaches to these facts the portentous figure of 45.7 litres per second per square kilometre of watershed.

Hydrology - at the confluence with the Moselle

The interannual flow rate/discharge of the Moselotte at its confluence with the Moselle is 13.7 m³/s, for a watershed of 356 km²[2]. The runoff curve number in its watershed is 1,214 mm, which is very high indeed, not merely much higher than the average for France (by more than a factor of three) with all basins included, but also much higher than the average for the French Moselle basin. In fact, the runoff curve number at Hauconcourt, located slightly downstream of the town of Metz, near where it leaves French territory, rises to 445 mm[3]. The specific flow rate of the Moselotte rises to 38.5 litres per second per square kilometre of watershed. This, along with the Breuchin (a tributary of the Lanterne and sub-tributary of the Saône which flows elsewhere in the same region) constitutes a record for the north third of France.

While in 2005, the water quality of the Moselotte was classified as category 1B, or "bonne" (good), the situation deteriorated somewhat in 2006, when the Rhine-Meuse water agency concluded that the river water analysed at the level of Autrive was now only "passable", or category 2. [5]. The reason was a highly depressed rate of oxygen saturation (also classed as "passable"), which had gone from 76% in 2005 to 69% in 2006. It should be noted that the chemical oxygen demand, at 6.5 mg/l in 2006, was still classified "bonne". The ammonium ion level was measured at 0.09 mg/l, which was classed as "excellent". 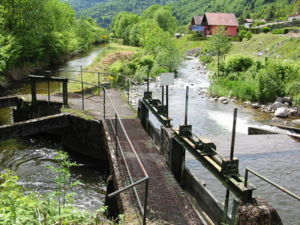 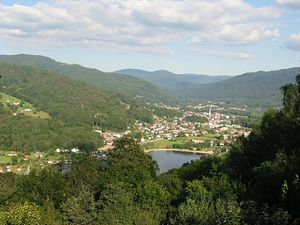 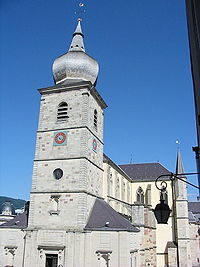 Highly populated by trout, the river has given rise to a significant breakthrough in fish farming, namely the invention of artificial reproduction by Joseph Remy and Antoine Géhin in the 19th century. The Moselotte basin also has the highest density in the world in small hydroelectric barrages, which serve the watermills, sawmills, spinning and weaving houses along the river and its tributaries.

The photograph opposite, taken upstream of La Bresse, shows a diversion powering a turbine. The main point has been equipped with a fish ladder.

A railway line once ran along the Moselotte valley between Remiremont and Cornimont. Today it has been transformed into a voie verte (green route) and replaced with bus service provided by TER Lorraine (line 9), extended to La Bresse.