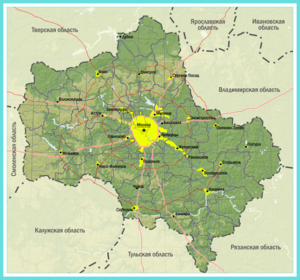 The largest towns of Moscow region. The metropolitan area is set roughly within the first rural route ring.

Moscow metropolitan area includes the city of Moscow, a ring of cities annexed to it and administered within (Balashikha, Korolyov, Krasnogorsk, Khimki, Mytishchi and Zelenograd), as well as large nearby towns with population of over 100,000 citizens (Reutov, Zheleznodorozhny, Podolsk and Lubertsy, to name a few) that fall under regional administration.[2]

Administratively, all those towns are a part of the Moscow Oblast. The metropolitan area has thus no coordinated administration structures.