Forward observers in the US military

Forward observers in the US military

Forward observers in the US military are artillery observers who carry the Military Occupational Specialty designator of 13F in the United States Army and 0861 in the United States Marine Corps. They are official called Fire Support Specialists in the U.S. Army and Fire Support Men in the U.S. Marine Corps. They are colloquially known as FiSTers, regardless of whether they are members of a FiST (Fire Support Team), FSE (Fire Support Element) or COLTs (Combat Observation and Lasing Teams). The Company Fire Support Officer (FSO) is the Officer in Charge of a Fires Support Element.

This MOS is generally unknown in the civilian world, and is often-overlooked within the armed forces yet, it is considered one of the most dangerous and challenging positions on the battlefield for a variety of reasons. FiSTers are highly skilled and usually above average in test scores(minimum GT score of 110 for the U.S. Army). They are also able to work silently for long periods of time, as some missions may range from a few hours to several weeks in duration. They can (and prefer to) operate with minimal support located both on or behind the enemy lines.

Their skills in reconnaissance must be met with similarly high intelligence and ability to think quickly in situations of extreme stress. Their missions are always critical as mental errors under stress can bring the massive firepower and ordinance they control down on friendly forces as well as enemy. FIST team members are especially self-reliant and independent. Their mission requires quick thinking under pressure, effectively integrating with many types of units and command structures as well as the ability to operate independently. At a tactical level the FO can serve in mission planning, strategy, and advisory positions with his command elements- the platoon and company level officers. Due to the substantial firepower they control, their communications and reconnaissance abilities, and their small numbers, artillery observers of any variety are regarded as targets of very high importance to enemy forces.

There are two main duties associated with Fire Support Teams according to general military doctrine and the U.S. Army Field Manual 6-30. Primary responsibilities of FiSTs are to "bring all means of indirect fire in support of the Maneuver Commander." This includes all Indirect Fire(IDF) Assets (Artillery, Mortars, Naval Gunfire and close-air-support [CAS]). Secondary duties consist of communicating battlefield intelligence such as enemy locations, strength, and activities to Command. COLT(all FiST) and LRS(mixed FiST-Cav Scout-Pathfinders) are brigade-level reconnaissance assets.

Soldiers in this MOS must meet a number of requirements not demanded of many other military careers. The artillery observer must be acutely aware of the position and movements of their own troops as well as those of the opposing forces. Because of the strategic importance of this information, U.S. Army FiSTers must qualify for security clearance, the level depending on their specific position. They must be able to work independently for long periods of time, as some missions can last for days or even weeks, and because of the clandestine nature of their work and their frequent placement on or behind enemy lines, the ability to operate with minimal support is of great importance.

Their physical demands are extremely high as the FiST's must survive and fight alongside Airborne Infantry, light infantry, mechanized infantry, United States Marines and United States Army Rangers while typically carrying a much greater equipment load (radios, secure communication equipment, laser target designators, etc.) than the maneuver element they are attached to. FM 22-100 lists the common combat loads for many of the MOS's in the US Army. FIST is noted as the second highest combat load. They must also survive in an Armor and Armored Cavalry environment. Because of this, their infantry fighting skills must be on par with their fellow soldiers in the maneuver element. FiSTers often surpass the P.T. level of the maneuver element they are assigned to.

Infantry training provides the individual soldier with a direct action skill level that provides them with an optimal survival rate. The FiSTer is qualified to attend many military schools because of their Combat Arms designation such as, Airborne, Air Assault, Ranger, and Special Forces training. As well as the Corps of Engineers Sapper School, Fire Support Specialist is the only non-engineer MOS allowed to attend this course. FiSTers are also given difficult cardiovascular, stamina and strength training in addition to their FiST training. As FiSTer are attached to direct action units, this training is meant to ensure they have the capability to perform their more cerebral duties, while under the same stress the maneuver unit is exposed to.

Fire Support Specialists may be attached to a mechanized infantry or an armored division. When mechanized infantry or armored, fire support teams consist of a driver, a commander, a Fire Support Non-Commissioned Officer, and a Fire Support Specialist of rank of E4 Specialist). This team works within an M7 Bradley Fighting Vehicle, called a B-FIST or Bradley FIST, which is designed for the task of Coordinating indirect fire. FO teams are often attached to Mechanized infantry dismounted teams. In this scenario they break off with small infantry teams and travel on foot as light infantry and search for the enemy. They can also break off in two man teams and establish an observation post.

Due to personnel shortages more and more FiSTers are finding themselves tasked with the duties of the Fire Support Officer, while simultaneously expected to perform their duties at the platoon level as Fire Support Sergeants and Fire Support Specialists. As 13F, and 13D (Fires Direction Center operator) are the only MOS' in the U.S. Army still school-trained as RTO's, FiSTers are often expected to perform as FiSTer and as their company commander's RTO, carrying, operating, and maintaining radio equipment, in addition to all the Fire Support equipment (IDF maps & compass, various laser designators, and of course, their weapons). 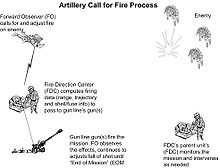 The Combat Observation and Lasing Team(COLT) is a high-technology, deeply inserted, spotting/reconnaissance team often called on to maximize the use of GPS guided munitions like the EXCALIBUR series weaponry/155mm shell. The standard COLT consists of a driver/Grenadier(PFC/E-3), a gunner/RTO/Observer(Specialist/E-4) and a Team Chief(SPC-CPL-SGT), the vehicle commander who oversees the operation on the OP, and approves fire missions. While other MOS' may be work in conjunction with the COLT (such as a sniper team), FiST personnel remain its core element.

Unfortunately, the ground truth of the Iraqi Theater has caused the majority of COLT's to be attached to the organic Field Artillery battalion's Headquarters and Headquarters Battery to serve as the skilled and trained nucleus of patrol columns consisting of support troops or cannon crewmen(13B) not normally trained or expected to perform mounted or dismounted operations.

With the need for coordinated indirect-fire support control at higher levels, Fire Support Specialists are also assigned to the “Fire Support Element,” at Battalion level, and as the "Fires" section of the Operations Staff from Brigade/Regiment level through Corps.

Since 2003 the U.S. Army has also used the RQ-7B Shadow Unmanned Aircraft, flown by soldiers in the 15W MOS, in Iraq and Afghanistan for artillery correction, close air support and reconnaissance.[citation needed]

The joint fires observer (JFO) has an additional skill identifier (ASI) of L7. The JFO (13F L7) are trained to call in indirect surface fires, Naval surface fire support, attack aviation close combat attack, and AC-130 calls for fire. They also are trained to provide a (JTAC or FAC[A]) with targeting information for close air support (CAS) Type 2 and Type 3 controls where the controller cannot see the target. The concept of operation is that multiple JFOs will observe a large battle area and liaise with one Joint Terminal Attack Controller (JTAC) from the Air Force/Marine Corps/Navy, multiplying the effective area of operations for that JTAC[citation needed].

"Directs the fire of an artillery unit from a forward position. Observes shell bursts and adjusts fire by forward observation or computation methods; consults with commanders of supported unit in determination of appropriate artillery targets, normal barrage, and zones of defense; trains personnel in procedures of artillery operation; organizes observation posts; sets up and maintains communication systems."

Must know artillery methods in direction of fire, use of fire direction instruments, such as aiming circle, BC telescope, and range finder. Must be familiar with military maps and their interpretation. Should have experience with a firing battery and know potentialities and limitations of particular type of artillery involved. Knowledge of mathematics through trigonometry desirable. Military experience including graduation from artillery officers' school essential. The present-day title is a Fire Support Officer (FSO).