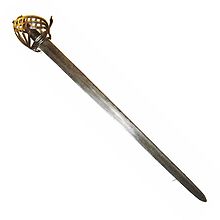 A typical schiavona of the late 17th century.

Juxtaposition of an early broadsword with quillons with a 17th-century schiavona, from The Encyclopaedia of Sport & Games (1911). 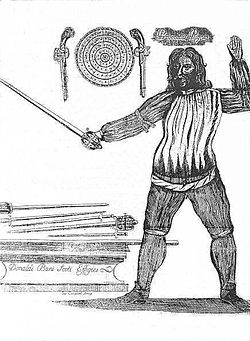 Portrait of Donald McBane, a Scottish fencing master, from Donald McBane's The Expert Swordsman's Companion (1728). This image portrays McBane in the "Inside Guard" with a Broadsword, while the table next to him has both Broadswords and Smallswords. The wall behind him has a Targe with flintlock pistols on each side.

The basket-hilted sword is the name of a group of early modern sword types characterized by a basket-shaped guard that protects the hand. The basket hilt is a development of the quillons added to swords' crossguards since the Late Middle Ages. Also known as the broadsword, the basket-hilted sword was a military sword, termed "broad" in contrast with the rapier, the slim dueling sword worn with civilian dress during the same period.

The basket-hilted sword is a development of the 16th century, rising to popularity in the 17th century and remaining in widespread use throughout the 18th century, used especially by heavy cavalry up to the Napoleonic era.

One of the earliest basket-hilted swords was recovered from the wreck of the Mary Rose, an English warship lost in 1545. Before the find, the earliest positive dating had been two swords from around the time of the English Civil War.[1] At first the wire guard was a simple design but as time passed it became increasingly sculpted and ornate.[2]

The basket-hilted sword or broadsword was a heavy military sword, contrasting with rapier, the light sword worn with civilian dress which evolved from the espada ropera or spada da lato type during the same period. Since the blade of the rapier had become narrow and thrust-oriented, the heavier blades became known as "broadsword".

By the 17th century there were regional variations of basket-hilts: the Walloon hilt, the Sinclair hilt, schiavona, mortuary sword, Scottish broadsword or "claymore" (also "claybeg"), and some types of eastern European pallasches.[3][4][5] The mortuary and claymore types two were common in Britain, whether domestically-produced or acquired through trade with Italy and Germany. They also influenced the 18th-century cavalry sabre.[6]

Descendants of the basket-hilted sword, albeit in the form of backswords with reduced "half" or "three-quarter" baskets, remained in use in cavalry during the Napoleonic era and throughout the 19th century, specifically as the 1796 Heavy Cavalry Sword, the Gothic Hilted British Infantry Swords of the 1820s to 1890s, the 1897 Pattern British Infantry Officer's Sword and as the Pattern 1908 and 1912 cavalry swords down to the eve of World War I. 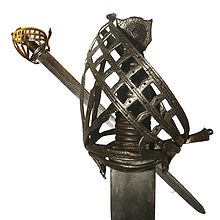 The Schiavona was a Renaissance sword that became popular in Italy during the 16th and 17th centuries.[7] Stemming from the 16th-century sword of the Balkan mercenaries who formed the bodyguard of the Doge of Venice, the name came from the fact that the guard consisted largely of Istrian and Dalmatian Slavs (Schiavoni).[5] It was widely recognisable for its "cat's-head pommel" and distinctive handguard made up of many leaf-shaped brass or iron bars that was attached to the cross-bar and knucklebow rather than the pommel.[5]

Classified as a true broadsword, this war sword had a wider blade than its contemporary civilian rapiers. It was basket hilted (often with an imbedded quillon for an upper guard) and its blade was double edged. A surviving blade measures 93.2 cm × 3.4 cm × 0.45 cm and bears two fullers or grooves running about 1/4 the length of the blade. Weighing in at around 1.1 kg, this blade was useful for both cut and thrust.[8]

The schiavona became popular among the armies of those who traded with Italy during the 17th century and was the weapon of choice for many heavy cavalry.[9] It was popular among mercenary soldiers and wealthy civilians alike; examples decorated with gilding and precious stones were imported by the upper classes to be worn as a combination of fashion accessory and defensive weapon.[10] 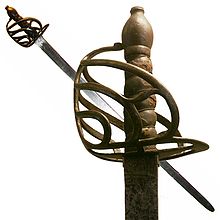 A similar weapon was the cut-and-thrust mortuary sword which was used after 1625 by cavalry during the English Civil War. This (usually) two-edged sword sported a half-basket hilt with a straight blade some 90–105 cm long. These hilts were often of very intricate sculpting and design.

After the execution of King Charles I (1649), basket-hilted swords were made which depicted the face or death mask of the "martyred" king on the hilt. These swords came to be known as "mortuary swords", and the term has been extended to refer to the entire type of Civil War era broadswords by some 20th century authors.[11]

This sword was Oliver Cromwell's weapon of choice; the one he owned is now preserved in the Royal Armouries Museum in Leeds. Mortuary swords remained in use until around 1670 when they fell out of favor among civilians and began to be replaced with the smallsword.[6] 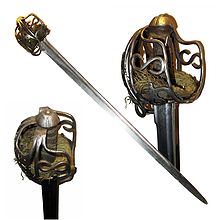 A Scottish broadsword of the claidheamh cuil or "back-sword" type

George Sinclair's forces land in Norway, 1612. The soldier in the center is armed with a Sinclair hilt broadsword and wears a comb morion.

The Sinclair Hilt was one of the earliest basket-hilt designs and was of south German origin.[12] On average the blade of a Sinclair or "compound" hilt sword measured 38in.[citation needed]

It had long quillons and an oval leather-wrapped grip that was originally designed for falchion blades but was soon applied to the broadsword.[13] It had a large triangular plate very similar to the ones used on main gauche daggers and was decorated with pierced hearts and diamonds.[14]

Hilts of this design were also used on other weapons including sabres, cutlasses, rapiers, backswords and civilian hunting hangers.[15]

A similar weapon was the Pallasch which had the same hilt and straight blade but was single-edged. It was used until the mid-18th century by the Austrian army and inspired the British 1796 Heavy Cavalry Sabre.

It is believed that these swords were brought back to Scotland by George Sinclair's mercenaries who had served on the continent.[16]

The Sinclair hilt broadsword influenced the development of the Scottish basket-hilted claymore, which was used by highlanders in the 17th and 18th century.[17] After the Jacobite Wars it became a symbol of Scotland.[18] 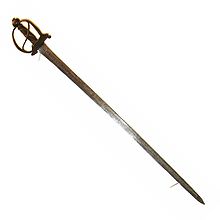 The so-called walloon sword (épée wallone)[19] was common in Germany, Switzerland, the Netherlands and Scandinavia in the Thirty Years' War and Baroque era. Basket-hilted rapiers made during the same period are known as Pappenheimer rapiers.[20]

The Walloon sword was favored by both the military and civilian gentry[21] for its versatility: it was light, flexible, and good for both cutting and thrusting as well as the more accurate pointwork required in duels with rapiers.[22] Its hilt was ambidextrous with shell-guards and knuckle-bow that inspired 18th century continental hunting hangers.[23]

Following their campaign in the Netherlands in 1672 (when many of these German-made swords were captured from the Dutch), the French began producing this weapon as their first regulation sword.[24] Weapons of this design were also issued to the Swedish army from the time of Gustavus Adolphus until as late as the 1850s.[25] 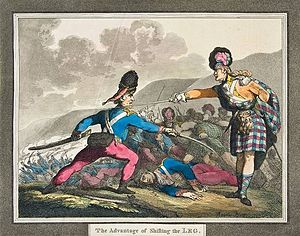 "The Advantage of Shifting the Leg", plate from Henry Angelo & Son's Hungarian and Highland Broadsword (1799).

George Silver in his Paradoxes of Defence (1599), published some material on broadswords, but no instructive details. Two later books by Silver, Brief Instructions on my Paradoxes of Defence, and Rules of Defence to be observed in open Fyght, &c., contained more detailed instructions in the use of the broadsword. Silver advises three principal "fyghts", or stances for attack, one with the hilt held above the wielder's head with the point towards the wielder's knee; the second with the wielder's hilt just below chest level with the point towards the wielder's left foot; and the third having the hands held low and the point held upright. The "wards" or parries were made from these middle positions by moving the sword to the right or left. Silver was also the first author of any nationality to distinctly advocate parrying and riposting, to which he devoted an entire chapter.[3]