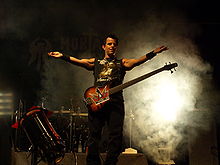 Mortal Sin is an Australian thrash metal band that formed in 1985, and arguably the first band in Australia to play purely thrash metal.[citation needed]

The group formed around singer Mat Maurer and drummer Wayne Campbell in Sydney. At first Campbell had attempted to get Maurer into another band called Wizzard but the rest of that band was reluctant to support the idea so the pair struck out on their own, quickly recruiting Wizzard's guitar Keith Krstin, bass player Andy Eftichiou from a band called Judge and a second guitarist Neville Reynolds. Reynolds was fired for not being available to play at the band's very first show and was replaced by Paul Carwana.

Mortal Sin quickly developed a solid following and only seven months after their first live show the band recorded an album-length demo in a mere three days in July 1986. The eight track recording was eventually released in late 1986 as Mayhemic Destruction and released as an album on the band's own label Mega Metal Productions. Reaction to the album was immediate and the band was snapped up for an international album deal by Phonogram Records UK, who then re-released Mayhemic Destruction worldwide in 1987. In the meantime, Krstin was replaced by Mick Burke from fellow Sydney thrash act Slaughter Lord. Mortal Sin spent much of 1988 recording a second album with producer Randy Burns, who had previously worked with Kreator & Megadeth. The release of Face of Despair was held over until early 1989; shortly afterward the band gained further prominence with an Australian tour with Metallica in May but Campbell was sacked shortly after. Another former Slaughter Lord member in Steve Hughes replaced him. In January 1990, Mortal Sin toured Europe and the UK then played some shows in the US but after their final show there Maurer quit the band.

On its return to Australia, the band split, only to reform a short time later with Steve Sly replacing Maurer. The vocal power and range of Sly immediately captivated the "die hard" fans and acceptance was swift, giving new life to the classic Mortal Sin tunes, propelling them to a new musical level, however by the end of the year, due to past management and touring issues Hughes, Burke and Carawanna had all left the band to pursue other interests. Eftichiou and Sly developed a brotherly bond and continued rebuilding the band recruiting Alex Hardy (guitar), Dave DeFrancesco (guitar, ex-Enticer) and drummer Nash Hall, the band toured for 12 months and recorded a third album entitled Every Dog Has Its Day (released as Rebellious Youth in some markets) that showcased a more traditional metal style than previously which was accepted with varying degrees of enthusiasm throughout the "metal market". The band suffered issues of being too big for the club/pub circuit in Australia which was exemplified when Sly and band returned to his home base of Newcastle (the first time the band had played there in any form) at the Cambridge Hotel, as the band played mayhem and disorder exploded in Hunter Street, an overwhelming fan turn out, 100's more than the venue could accommodate, arrests, injuries, and a ban from Newcastle imposed. The new combination, affected by management failure, venue issues and internal bickering, caused by the former, ultimately led to the 1992 demise of this incarnation of Mortal Sin.

For the next few years Wayne Campbell featured in bands such as White Trash and Grungeon and also worked as a promoter and Steve Hughes played in Presto and Nazxul. Andy Eftichiou formed Who's Guilty, a heavy rock band that achieved minor significance with an EP and ironically also included two former members of Wizard, plus in its "second coming" featured Steve Sly on Vocals . Mick Burke moved into the area of sound engineering. Mat Maurer formed his own band Omega which supported Scatterbrain, but the band did not progress into a writing stage.

Sly then made a total "genre shift" and was asked to front the highly successful Pop Rock outfit "The Chosen Few", who penned such tunes as "Rise" that was re recorded by Daryl Braithwaite of Sherbet fame, that shot to top ten chart success in several countries. On the eve of a recording deal in Germany Sly suffered serious health concerns, a nervous breakdown following a suicide attempt and ensuing depressive illness forced him to cease his singing career indefinitely.

It was not until 1996, when Campbell and Maurer then reformed Mortal Sin with Eftichiou and Carwana, plus Anthony Hoffman from Campbell's band Grungeon. Carwana departed almost immediately and was replaced by Troy Scerri, who had previously played alongside Campbell in White Trash. This version of the band released an EP - Revolution of the Mind independently and launched the first full-scale Australian tour that Mortal Sin had ever undertaken. The tour was not particularly successful and eventually Eftichiou was sacked, replaced briefly by the bassist from Sydney death metal band Tscabeze for the group's only appearance at the annual Metal For The Brain festival in Canberra. Jason Thorncraft of Sydney's Headlifter took Eftichiou's place after this but Mortal Sin split up once more in September 1998. The original Australian thrash metal band's reformation had lasted less than two years.

However, the band still was not finished, and in February 2004 Mortal Sin returned once more, this time as Campbell, Maurer, Eftichou and former Addictive guitarists Joe Buttigieg and Mick Sultana. A year later, Mortal Sin was inducted into the Hall of Fame at the inaugural Australian Heavy Metal Music Awards but within a month the line-up changed again when Campbell and Buttigieg were replaced by Luke Cook and Nathan Shea. In April 2005, Mortal Sin toured Australia with Anthrax and a comeback album is being recorded. On 4 February 2006, the band played a show in Sydney that featured them performing the Mayhemic Destruction album live in its entirety for the first time; this performance was filmed for a proprosed DVD release, however Mortal Sin announced in late June 2006 that the project was abandoned due to poor audio quality.

In August 2006, the band returned to European stages to play some shows in Germany, firstly with Rock over Hamburg alongside Michael Schenker Group, Rose Tattoo, Metal Church, Victory, Gorilla Monsoon and Tourettes Syndrome. The band also performed at the Wacken Open Air Festival. Mortal Sin's fourth full-length album An Absence of Faith was recorded in February 2007 at The Basement Studios in Sydney with producer Phil McKellar. It was released in July 2007 in Australia through Riot! Entertainment and in Europe in September through Germany's Armageddon Music. In late 2007, the band also released reissued versions of Mayhemic Destruction and Face Of Despair through Riot!, both of which contained bonus tracks.

Mortal Sin returned to Europe in March 2008 as support to Overkill to tour and promote the new album. In the Summer of 2008, the band played some festival gigs like the Wacken Open Air and Jalometalli. Back in Australia, they supported Judas Priest and Testament in 2008 and late in 2009 undertook a two week tour of South America.

In June 2011 Mortal Sin finished recording a new album "Psychology of Death" with nine tracks: Psychology of Death, Blood of My Enemies, Paralysed by Fear,Burned into your Soul, Deny, Doomed to Annihilation, Kingdom of Pain, Down in the Pit & Hatred. Ryan Huthnance replaced Mick Sultana on guitar. 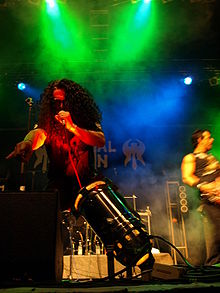 Revolution of the Mind

"Out of the Darkness" from the album An Absence of Faith

An Absence of Faith