The Morris water navigation task is a behavioral procedure widely used in behavioral neuroscience to study spatial learning and memory. It was developed by neuroscientist Richard G. Morris in 1981,[1] who used it to show that lesions of the hippocampus impaired spatial learning.[2] 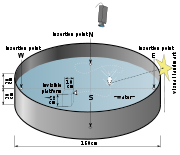 Schematic drawing of the Morris water navigation test for rats. Size and marker may vary.

In the typical paradigm, a rat or mouse is placed into a small pool of water—back-end first to avoid stress, and facing the pool-side to avoid bias—which contains an escape platform hidden a few millimeters below the water surface. Visual cues, such as colored shapes, are placed around the pool in plain sight of the animal. The pool is usually 1.2 to 1.8 meter in diameter and 60 centimeters deep. The pool can also be half-filled with water to 30 centimeters in depth. A sidewall above the waterline prevents the rat from being distracted by laboratory activity. When released, the rat swims around the pool in search of an exit while various parameters are recorded, including the time spent in each quadrant of the pool, the time taken to reach the platform (latency), and total distance traveled. The rat's escape from the water reinforces its desire to quickly find the platform, and on subsequent trials (with the platform in the same position) the rat is able to locate the platform more rapidly. This improvement in performance occurs because the rat has learned where the hidden platform is located relative to the conspicuous visual cues. After enough practice, a capable rat can swim directly from any release point to the platform.

Various drugs can be applied to test subjects before, during, or after maze training, which can reveal information about physical ability. For example rats treated with the NMDA receptor blocker APV perform poorly in the Morris water maze, suggesting that NMDA receptors play a role in learning.[3] And since long-term potentiation (LTP) also requires NMDA receptors, spatial learning may require LTP.

The Morris water navigation task has some advantages over conventional mazes such as the T-maze. For instance, there are no local cues such as scent traces and there is no fixed escape-formula; the rat makes good progress in the trials because it wants to escape. Rats (but not mice) can be considered to be natural swimmers – they are not distressed but they do want to find the platform.

Initial studies in the early eighties suggested that laboratory mice seemed to have a tendency to float, perhaps leading to their perceived uncooperativeness in the water maze. Thus, it was suggested that mice did not actually aim to find the platform, but simply waited until the technician rescued them, though watermazes have now been utilized extensively in thousands of published experiments with transgenic and knock out mice. The key with using mice is to use procedures that minimize stress (e.g., handling the mice for a few minutes every day before the start of training can reduce stress during training and improve performance in this task). Also, it is important to avoid using mouse strains that are blind or that lack spatial navigation (e.g. have unknown genetic or/and neuroanatomical lesions that disrupt hippocampal function).

The earliest and classic measure of learning is latency, which is the time it takes to find the platform. However, rats and mice can cheat. They might develop search techniques that do not rely on spatial information, still getting to the platform relatively quickly. There are several analyzes that can tease out true spatial learning, many of which use probe trials during training: the escape platform is removed and the mice or rats are allowed to search for it for a fixed time (often 60 seconds). Analysis of the probe trial is made easier with a video tracker that traces the swimming patterns of the animals while searching for the platform. Commercial systems come with a suite of analysis features to extract measures such as time and path in quadrants, near platform, in any specified area. The Gallagher measure looks for average distance to platform. The Whishaw corridor test measures time and path in a strip from swim-start to platform.