A mooring mast, or mooring tower, is a structure designed to allow for the docking of an airship outside of an airship hangar or similar structure. More specifically, a mooring mast is a mast or tower that contains a fitting on its top that allows for the bow of the airship to attach its mooring line to the structure.[1] When it is not necessary or convenient to put an airship into its hangar (or shed) between flights, airships can be moored on the surface of land or water, in the air to one or more wires, or to a mooring mast. After their development mooring masts became the standard approach to mooring airships as considerable manhandling was avoided.[2]

Airship mooring masts can be broadly divided into fixed high masts and fixed or mobile low (or ‘stub’) masts. In the 1920s and 1930s masts were built in many countries. At least two were mounted on ships. Without doubt the tallest mooring mast ever designed was the spire of the Empire State Building which was originally constructed to serve as a mooring mast[3], although soon after converted for use as a television tower[4] due to the discovered infeasibility of mooring an airship, for any length of time, to a very tall mast in the middle of an urban area.[3]

HMA No 1 (Mayfly) – the first airship known to have been moored to a mast.

Mooring an airship by the nose to the top of a mast or tower of some kind might appear to be an obvious solution, but dirigibles had been flying for some years before the mooring mast made its appearance. The first airship known to have been moored to a mast was HMA (His Majesty's Airship) No.1, named the ‘Mayfly’, on 22 May 1911. The 38 ft (12 m) mast was mounted on a pontoon, and a windbreak of cross-yards with strips of canvas were attached to it. However, the windbreak caused the ship to yaw badly, and she became more stable when it was removed, withstanding winds gusting up to 43 miles per hour (69 km/h) [5]. Further experiments in mooring blimps to cable-stayed lattice masts were carried out during 1918 [6]. 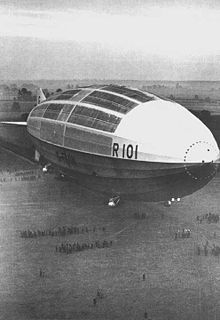 The R101 being handled on the ground, showing the size of the landing party required to manage a large airship. One purpose of a mooring mast was to reduce the number of men needed to manage the landing process.

The following account of the British high mast in its fully developed state at Cardington, and its operation, is abridged from Masefield[7].

Mooring masts were developed to act as a safe open harbour to which airships could be moored or unmoored in any weather, and at which they could receive (hydrogen or helium) gas, fuel, stores and payload. The Cardington mast, completed in 1926, was an eight sided steel girder structure, 200 feet (61 m) high, tapering from 70 feet (21 m) diameter at ground level to 26 feet 6 inches (8.1 m) at the passenger platform, 170 feet (52 m) from the ground. Above the passenger platform was the 30 feet (9.1 m) of the conical housing for the mooring gear. A lower platform 142 feet (43 m) above the ground accommodated searchlights and signalling gear in a gallery 4 feet (1.2 m) wide. The top platform, at the height of 170 feet (52 m), from which passengers embarked and disembarked to and from the airships, was 40 feet (12 m) in diameter and encircled by a heavy parapet. The top rail of the parapet formed a track on which a gangway, let down from the airship, ran on wheels to give freedom for the airship to move around the tower as it swung with the wind. An electric passenger lift ran up the centre of the tower, encircled by a stairway to provide foot access. The upper portion of the tower, from the passenger platform upwards, was a circular steel turret surmounted by a truncated cone with its top 23 feet (7.0 m) above the passenger platform. A three-part telescopic arm, mounted on gimbals, projected through an opening at the top, free to swing from the vertical in any direction up to 30 degrees of movement. The top of the arm consisted of a bell-shaped cup mounted to rotate on ball bearings. A cable extended through the bell-mouth which, linked to a cable dropped from airship to be moored, enabled the nose of the airship to be drawn down until a cone on the nose locked home into the cup and so secured the airship to the tower. The telescopic arm was then centred, locked in the vertical position, and made free to rotate on a vertical axis so the airship could swing, nose to tower, in any direction of the wind. In the machinery house at the base of the tower three steam-driven winches operated the hauling gear through drums 5 feet (1.5 m) in diameter to give cable hauling speeds of 50 feet a minute.

While an airship approached the mast slowly against the wind a mooring cable was let out from nose to the ground and linked, by a ground party, to the end of the mooring cable paid out from the mast head. The cable was then slowly wound in with the airship riding about 600 feet (180 m) above the mast and down wind, with one engine running astern to maintain a pull on the cable. At this point, two side wires – or ‘yaw guys’ – were also connected to cables taken from the nose of the airship to pulley blocks some hundreds of feet apart on the ground and thence to winches at the base of the mast. All three cables were then wound in together, the main pull being taken on the mooring cable while the yaw guys steadied the ship. When all the cable had been wound in an articulated mooring cone on the nose of the airship locked home into the cup on the mast. The mast fitting was made free to rotate as the airship swung with the wind with freedom also for pitch and roll.[8] A gangway, like a drawbridge, which could be drawn up flush with the nose of the airship, was then let down with its free end resting on the parapet of the platform running round the mast. Passengers and crew boarded and disembarked from the shop under cover along this gangway. About twelve men were needed to moor an airship to a mast.

Four high masts of the Cardington type were built along the proposed British Empire Airship Service routes, at Cardington itself, at Montreal (Canada), Ismailia (Egypt) and Karachi (then India, now in Pakistan). None of these survive. Similar masts were proposed at sites in Australia, Ceylon (now Sri Lanka), Bombay, Keeling Islands, Kenya, Malta, at Ohakea in New Zealand, and in South Africa [9]. The general site specifications can be found in documents produced by the British government[10].

German mooring methods differed significantly from those adopted by the British. To quote Pugsley (1981) [11]

"the Germans, originally for ease of transport and for economy, developed a system using much lower masts. The nose of the ship was tethered as before to the mast head, which was only a little higher than the semi-diameter of the ship's hull. The lower fin at the stern was then fixed to a heavy carriage running on a circular railway track around the mast, and this carriage was powered so as to be able to move around the track to keep the ship head on to the wind. In the most sophisticated form, used by the Hindenburg, the rail system was linked to rails running from the mast straight into the airship shed, and the mast was powered so that the ship could be moved mechanically into the shed, complete with mast and stern carriage".

The following account of landing the German airship Graf Zeppelin is abridged from Dick and Robinson (1985) [12]:

Before attempting a landing, contact was made by radio or flag signals with the ground crew to determine the ground temperature and wind conditions. For a normal calm weather landing the ship was trimmed very slightly nose down, as this gave a better gliding angle and the ship almost flew herself down. A smoky fire was started on the ground to show the wind direction. The ship then made a long approach with a rate of fall of 100 feet per minute, and the lines were dropped when she was over the landing flag. When conditions were unusual, as in gusty and bumpy weather, the Graf was weighed off a little light, and the approach had to be fast and preferably long and low. When the airship was over the field the engines had to be reversed for some time to stop her, and this also helped to get the nose down. Yaw lines dropped from the ship's nose were drawn out to Port and Starboard by thirty men each, while twenty more on each side pulled the ship down with spider lines (so called because twenty short lines radiated like the legs of a spider from a block). When the airship reached the ground, fifty men held the control car rails and twenty held those of the after car. With thirty men in reserve, the ground crew totalled two hundred men. The ground crew would then walk the Graf to a short, or ‘stub’, mast, to which the nose of the airship would be attached. The airship would then rest on the ground with its rear gondola attached to a movable weighted carriage that enabled the airship to swing around the mast with the wind. In some places the stub mast was mounted on rails and could be drawn into the airship hangar, guiding the nose of the ship while the tail was controlled by the carriage attached to the rear gondola. Airships designed for landing on the ground had pneumatic bumper bags or undercarriage wheels under the main and rear gondolas (or tail fin).

Dick states that the Germans never used mooring masts until the Graf Zeppelin entered service in 1928, and never moored to high masts. To some extent this probably reflects the conservatism of the Zeppelin company operations. Long experience in handling airships in all sorts of conditions was valued and innovations or significant changes in practice were unlikely to be adopted unless clear advantages were apparent.

In the US a mix of techniques were applied, and airships moored to both high and stub masts. Large ground crews (or ‘landing parties’) of up to 340 men were required to manage the large airships Akron and Macon at landing or on the ground, before they could be attached to the stub mast. Being part of a ground crew was not risk-free. In gusty conditions, or if mis-handled, an airship could suddenly rise. If the ground crew did not immediately let go of the handling lines they risked being carried off their feet. In one famous incident captured on movie film in 1932, during the landing of the US airship Akron, three men were carried off their feet in this way, two to fall to their deaths after a short time. The third managed to improve his hold on the handling rope until he could be hauled into the airship [5][13].

At least two ships have mounted mooring masts. As the US intended to use large airships for long-range maritime patrol operations[14] experiments were made in mooring airships to a mast mounted on the ship USS Patoka.

Over time the airships USS Shenandoah, Los Angeles, and Akron all moored to the mast mounted at the stern of the ship, and operated using her as a base for resupply, refuelling and gassing[15].

The Spanish seaplane carrier Dédalo (1922–1935) carried a mooring mast at the bow to cater for small dirigibles carried on board.[16][17]

Smaller mobile masts have been used for small airships and blimps for a long time. They may be wheel or track-mounted, and can be operated by a small crew. The general operating principle is broadly similar to the larger masts. Modern blimps may operate from mobile masts for months at a time without returning to their hangars[2].