List of natural satellites
This article is about the moons of planets and dwarf planets. For asteroid or minor-planet moons, see Minor planet moon.

The Solar System is known to contain 176 natural satellites, or moons, excluding those in orbit around Small Solar System Bodies. 19 moons in the Solar System are large enough to have achieved hydrostatic equilibrium, and thus would be considered planets or dwarf planets if they were in direct orbit around the Sun.

The earliest published discovery of a moon other than the Earth's was by Galileo Galilei, who discovered the four Galilean moons in 1610. Over the following three centuries only a few more moons were discovered. Missions to other planets in the 1970s, most notably the Voyager 1 and 2 missions, saw a surge in the number of moons detected, and observations since the year 2000 using mostly large ground-based optical telescopes, have discovered many more, all of which are irregular. 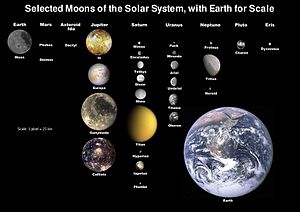 Selected moons, with the Earth to scale. Nineteen moons are large enough to be round, and one, Titan, has a substantial atmosphere.

The number of moons discovered in each year

Venus has no moons,[2] though reports of a moon around Venus have circulated since the 17th century.

Earth has one Moon, the largest moon of any rocky planet in the Solar System. It also has at least two co-orbitals: the asteroids 3753 Cruithne and 2002 AA29;[3] however, since they do not orbit Earth, they are not considered moons. (See Other moons of Earth and Quasi-satellite.)

Mars has two known satellites, Phobos and Deimos ("fear" and "panic", after attendants of Ares, the Greek god of war, equivalent to the Roman Mars). Searches for more satellites have been unsuccessful, putting the maximum radius of any other satellites at 90 m (100 yd).[4]

Jupiter has 64 known moons with secured orbits. Its eight regular moons are grouped into the planet-sized Galilean moons and the far smaller Amalthea group. They are named after lovers of Zeus, the Greek equivalent of Jupiter. Its 54 known irregular moons are organized into two categories: prograde and retrograde. The prograde satellites consist of the Himalia group and two others in groups of one. The retrograde moons are grouped into the Carme, Ananke and Pasiphaë groups, as well as some isolated moons.

Saturn has 62 moons with confirmed orbits, 53 of which have names, and most of which are quite small. Seven moons are large enough to be in hydrostatic equilibrium. Twenty-two of Saturn's moons are regular, and traditionally named after Titans or other figures associated with the mythological Saturn. The remaining thirty-eight, all small, are irregular, and classified by their orbital characteristics into Inuit, Norse, and Gallic groups, and their names are chosen from the corresponding mythologies. The rings of Saturn are made up of icy objects ranging in size from 1 centimetre to hundreds of metres, each of which is on its own orbit about the planet. Thus a precise number of Saturnian moons cannot be given, as there is no objective boundary between the countless small anonymous objects that form Saturn's ring system and the larger objects that have been named as moons. At least 150 "moonlets" embedded in the rings have been detected by the disturbance they create in the surrounding ring material, though this is thought to be only a small sample of the total population of such objects.

Uranus has 27 named moons, five of which are massive enough to have achieved hydrostatic equilibrium. There are 13 inner moons that orbit within Uranus's ring system, and another nine outer irregular moons. Unlike most planetary moons, which are named from antiquity, all the moons of Uranus are named after characters from the works of Shakespeare and Alexander Pope's work The Rape of the Lock.

Neptune has 13 named moons; the largest, Triton, accounts for more than 99.5 percent of all the mass orbiting the planet. Triton is large enough to have achieved hydrostatic equilibrium, but, uniquely for a large moon, is irregular, suggesting it was captured. Neptune also has six known inner regular satellites, and six outer irregular satellites.

Among the dwarf planets, Ceres has no known moons. It is 90 percent certain that Ceres has no moons larger than 1 km in size, assuming that they would have the same albedo as Ceres itself.[5]

Pluto has four moons. Its largest moon Charon, named after the ferryman who took souls across the River Styx, is more than half as large as Pluto itself, and large enough to orbit a point outside Pluto's surface. In effect, each orbits the other, forming a binary system informally referred to as a double-dwarf-planet. Pluto's three other moons, Nix, Hydra and S/2011 P 1, are far smaller and orbit the Pluto–Charon system.

Makemake has no known moons. A satellite having 1% Makemake's brightness would have been detected if it had been located at an angular distance from Makemake farther than 0.4 arcseconds (0.0001 degrees).[6]

Eris has one known moon, Dysnomia. Its radius is currently not known, but is expected to be around 100 km.[7]

Moons of planets and dwarf planets

This is a list of all the moons of planets and dwarf planets in the Solar System. Those 19 moons that are large enough to have achieved hydrostatic equilibrium are listed in bold. The seven largest moons are listed in bold and italic. Sidereal period differs from semi-major axis because it depends on the mass of the primary as well as the satellite's distance from it.