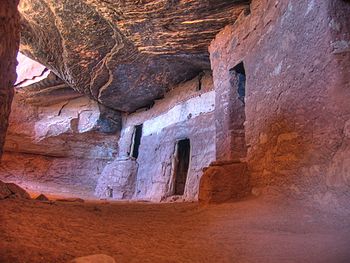 Moon House (sometimes written as Moonhouse) is a Pueblo III-period cliff dwelling located in southeastern Utah on Cedar Mesa. It was created by the Anasazi or Ancestral Puebloan peoples between 1150 and 1300.

Interior view of Moon House showing some of the prehistoric designs on the surfaces of the structures.

Three sections of the Moon House complex are identified by Bloomer (1989[1]); M-1, M-2, and M-3. These are discussed briefly. Structures from the M-1 cluster yield tree-ring dates from between 964 and 1267, with most rooms clustering between 1125 and 1250. Structures from the M-2 cluster date from between 1109 and 1268. Structures in the M-3 cluster date from between 1044 and 1266, with most dates between 1150 and 1255.
Both Dean and Bloomer postulate different rooms served different functions[2], and each section of the Moon House complex had a different function. M-1 seems to represent a residential area, with approximately 5 households, while M-2 primarily functioned as a storage area and M-3 as a ceremonial unit dominated by a large kiva. It is interesting to note that Bloomer found no other kivas within the canyon where Moon House is located, indicating that perhaps Moon House served as a local ceremonial center, servicing the ceremonial needs of the residents nearby in the canyon as well as possibly from the mesa tops.
Moon House derives its name from the unique pictographs located within Room I within the M-1 cluster.

In recent years, debate has arisen among hikers that visit the southwest over the location of Moon House. Some hikers have argued that its location, being on public land, should be available to the public. The Bureau of Land Management and some professional archaeologists disagree with this. In recent years, the USGS has removed Moon House, among other ancient ruins, from its 7.5 minute topographical maps[3].

Moon House is featured in David Robert's 1996 book "In Search of the Old Ones."[5]
A.G. Deiss sets a portion of her 2003 novel "The Sullivan Girls and the Mystery of Moonhouse" at Moon House. She also adds Butch Cassidy and the Wild Bunch into the history of Moon House[6], though there is no evidence that he actually visited the ruin.
Craig Childs talks briefly about Moon House in his book "House of Rain."[7]
The 2009 book "The Marauders" by Rob Gay centers around Moon House and the controversy surrounding publication of its location [8].