Monument to Christ the King

Monument to Christ the King 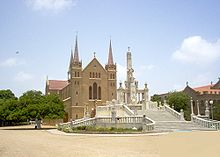 Monument to Christ the King with St Patrick's Cathedral in background

The Monument to Christ the King is a white marble structure in the grounds of Saint Patrick's Cathedral, Karachi, Pakistan.[1]

This monument stands overlooking one of the busiest streets of Karachi – Clarke Street. The idea for this 54 feet high architectural beauty emerged in 1926. It is the only structure of its kind in the city of Karachi and is popular with tourists.

Fr. Vincent Gimenez S.J. was the Parish Priest of St. Patrick’s Parish when Pope Pius IX initiated the Feast of Christ the King (celebrated on the last Sunday in October). Fr. Gimenez was the first to introduce the procession of Christ the King through the streets of Saddar Town in October 1926.

In 1927 the local branch of the Apostleship of Prayer conceived the idea of erecting a monument that would be a symbol of devotion to the Scared Heart of Jesus. The Catholics of Karachi and surrounding areas got together and formed a Board consisting of 26 members. Rev. Fr. Gimenez was the President, Mr. R.A.M D’Silva was General Secretary and Mr. C. S. Lobo was Treasurer.

In addition, 14 Catholic Associations connected with the parish and representative of the community around 80 persons also went about collecting donations, expediting the work of planning and overseeing construction.

The Monument was designed by Mr. M. X Andrade and the construction was supervised by the late Mr. August Rodrigues, retired Superintendent Engineer Public Works Department, Bombay. The marble for this monument was imported from Carara, Italy through Anthony Coutinho and Company. The statue of Christ the King installed high above the ground was a gift from Major Quadros of Cincinatus Town, Karachi.

The crypt has a seating capacity for 150 people and is adorned with two murals - one of heaven and the other of hell, the work of a Mr. Vaz, a Goan artist. The crypt also houses a replica of St. Francis Xavier. The total cost of the monument was Rs.81,500.

After four years of planning and construction the monument was completed. On October 17, 1931 there was an investiture ceremony of the new Knight of St. Gregory the Great followed by a Passion play which was held at St. Patrick’s School. Over two hundred people took part in this play which ran for four days, to packed houses. This was the first time that microphones and loud speakers were used at a function at St. Patrick’s.

The next day a Pontifical High Mass was celebrated followed by the opening of the Congress of Catholic Action, by His Excellency the Delegate Apostolic to the East Indies, Mgr. Leo P. Kierkels C.P. After a short inaugural address and the reading of the telegram send by the Holy Father, the hymn to Christ the King was sung. After a short speech by the President of the Executive Board, Fr. Gimenez, the monument was blessed by His Excellency Mgr. Kierkels C.P.

This ceremony was attended by a large segment of society including many non-Catholics. Church officials from this part of the world, priests and religious from all over India also joined the thousands of locals in this celebration.

During the week Masses were held at the Monument by the different organizations of the parish. Later a two mile long procession led by the band of St. Patrick’s Cadet Corps, and followed by parishioners dressed as various characters of the Bible.

Mr. Jamshed Nusserwanjee Mehta, President of the Municipal Corporation led a large section of non-Catholics in the procession. At the conclusion fireworks lit up the night sky.[2]

On its 80th anniversary, the monument is greatly damaged by the ravages of weather and time. Most of the bordering and pavements surrounding the monument as well as the cathedral building have been removed. The salinity in the soil had destroyed its base. Parts of it are broken and unless measures are taken to repair and save the structure it may not survive to see its century.[3]

On September 27, 2011 a fund-raising drive was initiated to raise money to renovate the Christ the King monument. Rupees 10 million (US$115,000) is needed to save the ancient cultural heritage of the Church.[4]