Montes de Oca is a region located east of the province of Burgos in the autonomous community of Castille and Leon. It is bounded on the north by La Bureba, south on Sierra de la Demanda, on the east by the province of La Rioja and west the Alfoz of Burgos.

When the roman arrives to the area, it was terrirory of the Autrigones tribe.

After the razzias of the eight century, Montes de Oca was repopulated mainly by Astur, Cantabri, Visigothic and Vascones (Basques) origins in the mid-ninth century, although remained border between the County of Castile with the Caliphate of Córdoba and its allies for at least a century and was afterwards border between kingdom of Castile and the kingdom of Navarre till the mid-twelfth century. During this period the shire to which belonged change from one kingdom to another until finally passed to the kingdom of Castile after an award, in 1146.

The shire capital is Belorado and this small city agrees with its old judicial party, excluding Alcocero de Mola. 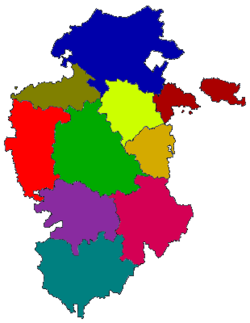 Shires of the province of Burgos.