Monte Pittman (born Monte Lee Pittman on November 19, 1975 in Longview, Texas) is an American musician, songwriter and studio musician, based out of Los Angeles, known largely as Madonna's long-time guitarist but has quite a diverse professional resume, including stints that range from glam-pop star Adam Lambert to metal legends Prong.

Pittman’s first band was called Insanity, but the project was short-lived. Eventually Pittman and the singer from Insanity, Chris Sheehan, started the 4-piece Myra Mains which was much more successful, releasing 2 demo tapes and 2 full album CDs. Headquartered in Longview, TX, Myra Mains Had fans from Dallas to Shreveport and all over East Texas. 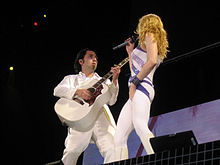 Monte Pittman and Madonna in the Confessions Tour (2006).

Pittman moved to Los Angeles in 1999 and worked at a guitar store as a salesman. He eventually quit to start teaching guitar lessons. Pittman’s third student was British film director Guy Ritchie, who had just received a guitar as a gift from his girlfriend, Madonna. Ritchie later returned the favor, buying Madonna her own guitar—and she began to take lessons from Pittman as well.[1][2]

A month after Pittman started giving guitar lessons to Madonna, he was invited to join her on stage at the David Letterman Late Show to promote her album Music. The pair played guitar together on an acoustic version of the hit song Don't Tell Me.[3] Subsequently, Pittman was invited to join the band for Madonna’s Drowned World Tour (2001). He has played in every incarnation of Madonna’s live band since then.

Pittman shares writing credits with Madonna on the tracks Easy Ride from American Life (2003), 2007’s Hey You charity single and It’s So Cool from Celebration (2009).

Additionally, Pittman has contributed performances to Madonna’s studio recordings, appearing on 2005’s Confessions on a Dance Floor (Like It Or Not)[4] and 2008’s Hard Candy (Spanish Lesson & Ring My Bell).

Pittman was introduced to Prong’s Tommy Victor[5] by White Zombie drummer Ivan de Prume; the two hit it off, and Pittman joined Prong in 2000. He played guitar on their 2002 tour[6] that spawned the live album 100% Live. Pittman handled guitar and bass duties for the 2003 album Scorpio Rising.

Monte Pittman and Adam Lambert in the Glam Nation Tour (2010)

Previous to Adam Lambert's audition on American Idol, Pittman, Lambert, Tommy Victor from Prong and Steve Sidelnyk formed a band entitled The Citizen Vein.[7] For the promo tour of Adam Lambert's debut album, Lambert hired Pittman as his guitarist. Lambert and the band appeared on several TV shows as well as at the Gridlock New Year's Eve 2010 festival.[8] Canada's Rock Star Weekly reviewed that "Pittman has a rock-god presence of his own, arising from his well-honed, skilled riffs that come from a connection of love and devotion to his instrument over a long and distinguished musical career" [9]

Pittman has been known to perform solo acoustic shows[10] in between his responsibilities with Prong and Madonna. His debut solo album, The Deepest Dark, was released in November 2009 and features 11 songs all written by Pittman, except for The Circle which was co-written with Tommy Victor and Adam Lambert. All the songs are acoustic.[11]

Almost a year after its digital release, due to popular demand, "The Deepest Dark" was re-released in hard copy CD, with 5 additional bonus tracks.[12] 1 week later, it reached the #1 spot on the most selling albums (Acoustic genre) on CDBaby.com [13] and was #9 in the Top 10 Most Selling Albums on CDBaby for October 2010 [14]

Pittman managed to raise $65,500 for his second solo album "Pain, Love & Destiny" through Kickstarter [15] with the help of his fans. He recorded the album in the summer of 2011 and Noah Shain produced it. The album features Kane Ritchotte on drums and Kelle Rhoads (Randy Rhoads's brother) on piano. It was released on October 3, 2011 [16]

Pittman has developed into a fiercely capable musician-- equally able to hold his own in a giant pop stadium tour as in a dark and smoky club belting out brutal metal tunes. Pittman's solo work takes a giant detour from both of those avenues, venturing into melodic acoustic territory on his debut, and branching out into rock anthems.

Pittman has been seen using various guitars over the years, including Breedlove [17] and PRS but seems to have settled into using the Gibson Les Paul as his primary guitar. He has also been known to play Gibson SGs and he has a number of custom made Gibson electrics, acoustics, and basses—frequently specially-built for use in Madonna shows.

Pittman is endorsed by Orange Amplifiers.[18]

Like most guitarists, Pittman’s effects change from show to show, but he has consistently employed the Roger Linn AdrenaLinn, the Emma DiscomBOBulator, and the Keeley Compressor. He has been known to use Eventide, Boss, MXR, Crybaby, Ernie Ball, Electro-Harmonix, Digitech, Line 6, Dunlop,[19] VoiceLive 2 by TC-Helicon[20] and Fishman effects pedals.[21] He uses Seymour Duncan pickups in his Jarrell guitars, including his signature model MPS model.