Monteceneri is a municipality in the district of Lugano in the canton of Ticino in Switzerland. It was created on 21 November 2010 through the merger of the municipalities of Medeglia, Bironico, Camignolo, Rivera and Sigirino. 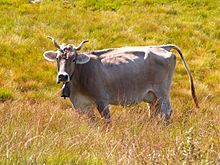 A cow in an alpine pasture near Medeglia

It can be assumed that in the High Middle Ages, Medeglia was part of the old valley community of Carvina. In 1501-03 changed area around Isone, Medeglia and Lugano became part of the county of Bellinzona, but remained in the Agno parish. It became part of the parish of Bironico in the 13th Century. Then, in 1585, it broke away from that parish to become a vice parish. It was raised to a full parish in 1888. The parish church of St. Bartholomew was first mentioned in 1328. The romanesque core of the church was renovated and rebuilt in the 15th and 17 Centuries.[2]

The local economy of the village was based on animal husbandry and forestry. Starting in the 16th Century the residents of Isone and Medeglia bought forests and pastures as far away as Robasacco, Contone, Cadenazzo, Sant'Antonino and Camorino while at the same time opening up trade relations with Bellinzona. In the 19th Century, many inhabitants emigrated with the majority going to Argentina and California. The mountain pastures of Medeglia were classified in 1996 as a wetland of national importance. In 2000, three quarters of the working population worked outside the municipality.[2]

By 1000, Bironico was probably the secular and religious center of Carvina, which included the middle and upper Vedeggio valley. For example, former parish included the villages of Camignolo, Ison, Medeglia, Mezzovico-Vira, Rivera, Robasacco and Sigirino. In the Early Middle Ages it was under the authority of the bishop of Como, followed by the city of Como. At the end of the 13th Century, the Rusca, a noble family from Como, lived in the community. They lived in the castle between 1328-1416. Starting in the 16th Century, an inn at the bridge over the Leguana served as a meeting place of the Swiss Confederation's ministers.[3]

In the past, the local economy relied on traditional alpine agriculture and emigration. Trade and industry have recently increased, but the current economic structure is dominated by commuters to the lower Vedeggio valley, Lugano and Bellinzona.[3]

In the Middle Ages Camignolo appears as part of the parish of Bironico and valley community of Valle Carvina. Como Cathedral had properties in the village. San Ambrogio castle is mentioned in 1348. It was probably destroyed around the beginning of Swiss Confederation rule in the 16th Century.

The inhabitants are still mainly employed in agriculture, though there was constant, large-scale emigration before the industrialization of the valley. Only in recent decades, has there been was a modest development in construction, industry and trade. Camignolo is the seat of a secondary school.[4]

Archeological objects and graves from the Iron Age and the Roman era have been found in Rivera. In the Middle Ages, Rivera was part of the valley community of Carvina. In the 13th Century Como Cathedral possessed estates in Sorencino. Starting in 1678, representatives from the twelve members of the Swiss Confederation in Ticino met in Casa dei landfogti before they assembled in Lugano.[5]

Rivera was a member of the parish of Bironico, before it became an independent parish in 1754. From 1779 until 1793, the parish church of S. Spirito was rebuilt.[5]

The villagers earned their living from agriculture, mostly in alpine meadows and pastures. During construction of the Ceneri tunnel in 1872-82, the population increased sharply. The completion of the road in 1811 and the construction of the tunnel and the station led to the emergence of a new district in the flatter part of the valley. This area forms the northern boundary of the agglomeration of Lugano. The base station of the Monte Tamaro gondola opened in 1972 in Rivera.[5]

In the Middle Ages, Sigirino belonged to the territory of the Carvina valley community. In a land register of 1296,Como Cathedral possessed lands, pastures, forests, farmland and land with houses in Sigirino. It is likely that at that time Sigirino possessed some type of fortifications.[6]

The Church of St. Andrew was first mentioned in 1296. It was totally rebuilt in the 16th Century and restored in the 18th. After its separation from Bironico in 1625, Sigirino had its own parish.[6]

Economically, the village was dominated by agriculture and emigration. In the 21st Century, it belongs to commercial and industrial zone in the valley floor between Sigirino and the neighboring villages.[6] 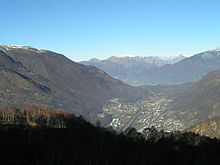 Of the built up area, housing and buildings made up 3.0% and transportation infrastructure made up 3.0%. Out of the forested land, 66.8% of the total land area is heavily forested and 2.7% is covered with orchards or small clusters of trees. Of the agricultural land, 3.4% is used for growing crops and 3.0% is used for alpine pastures. All the water in the municipality is flowing water. Of the unproductive areas, 4.9% is unproductive vegetation.[7] 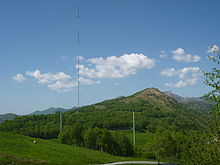 The Ruderi Del Castello Di S. Sofia and Stazione Radio Monte Ceneri are listed as Swiss heritage site of national significance. The entire villaggio of Osignano is designated as part of the Inventory of Swiss Heritage Sites.[9]