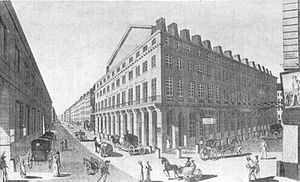 The Théâtre National de la rue de la Loi was a Parisian theatre located across from the Bibliothèque National de France on the rue de la Loi, which was the name of the rue de Richelieu from 1793 to 1806.[1] The theatre was built by the actress and theatre manageress Mademoiselle Montansier, and opened on 15 August 1793.[2] It was designed by the architect Victor Louis and had a capacity of 2,300 spectators.[3] The theatre was demolished in 1820, and its former site is now the Square Louvois.[2]