Ostra is a town and comune in the Marche, central Italy, near the modern Ostra Vetere, south-east of Senigallia.

The original name of the town was Montalboddo. In 1881 the name was changed to Ostra, like the ancient Roman city located near the modern town of Ostra.

Ostra lies on a hill over the Misa river valley, in typical Italian country landscape. It is the most important town in the hinterland of Senigallia, only 14 km from the Adriatic coast. Close by is the city of Jesi (18 km), while Ancona, the capital of the region Marche, is 40 km away.

The nearest railway station is that of Senigallia, while the Raffaello Sanzio Airport (Ancona-Falconara) is 30 km away. 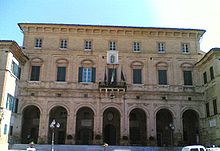 At the heart of the town is Piazza dei Martiri (Martyrs' square) the most important square in the town. Here you can find the 16th century City Tower (33 meters high), rebuilt in the 20th century after being bombed in World War II, the Municipal Building with its arches and its marble staircase and the St. Francis' Church, built in the 13th century.

Built in the late Middle Ages the wall surrounding the town is perfectly preserved for a total length of 1,200 meters. It still has nine great towers and two main entrances.

Located a few hundreds metres out of town, this Sanctuary devoted to Holy Mary is one of the most important in Italy, visited every year by many pilgrims coming both from Italy and Europe. It has been built in 1754 after Holy Mary appeared to a young girl and fosters a miraculous image of the Virgin.