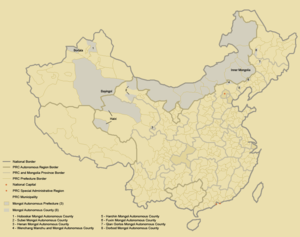 This map shows the Mongol autonomous subjects in the PRC.

Mongols in China (Chinese: 蒙古族 Ménggǔzú) are citizens of the People's Republic of China who are ethnic Mongols. They form one of the 55 ethnic minorities officially recognized by the People's Republic of China. There are approximately 5.8 million ethnic Mongols living in China. Most of them live in Inner Mongolia, Northeast China, Xinjiang, etc. The Mongol population in China is over twice that of the independent nation of Mongolia.

The Mongols in China are divided between autonomous regions and provinces as follows:

Besides the Inner Mongolia autonomous region, there are other Mongol autonomous administrative subdivisions in China.

Not all groups of people related to the medieval Mongols are officially classified as Mongols under the current system. Other official ethnic groups in China which speak Mongolic languages include: