The Money Game II: Kabutochou no Kiseki (ザ・マネーゲーム２ 兜町の奇跡?, "The Money Game 2: The Miracle of Kabutochou")[4] is a Nintendo Family Computer game that is about investing money in the stock market. 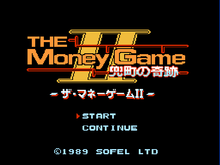 All the benefits from the original Money Game are here. Like in the real stock market, the player must buy a stock at a low price and sell the stock when he feels that it is high enough to garner him a huge profit. The game's artificial intelligence can manipulate the game's "economy" at any time causing either periods of mass economic growth, simulating periods of both economic boom and periods of economic recession.

The player controls a Japanese salaryman who must make more money through the stock market to impress his female significant other. Since the days of the week are done in Japanese, players must know the days of the week in written Japanese. Weekends are spent using cash to buy treats for the house and for the spouse. At the beginning of the game, the wife is angry at the player because he refuses to make more money for his family. Achieving certain goals will improve quality of life as more luxuries can be purchased.

This game is considered to be the Japanese version of Wall Street Kid.[5] The story line is different but the layout and the scheme of the office is almost exactly the same as in the North American release.

Only cosmetic changes were made to make it relevant with the North American audiences; the part about the rich uncle dying and the nephew and showering his girlfriend with gifts until she becomes his trophy wife may be garnishings added on by the Nintendo of America localization team. These changes were probably inspired by 1980s movies with a rags to riches theme to it. Both of these games expect the player to exercise his avatar and go out on dates.