The Saint Archangels Monastery (Serbian: Манастир Светих Архангела/Manastir Svetih Arhangela, Albanian: Kryeengjëjt e Shenjt, Manastiri i Kryeengjëjve të Shenjtë, Manastiri i kryeëngjëjve Mëhill e Gabriel) is a Serbian Orthodox monastery located in Prizren, in southern Kosovo[a]. It was founded by the Serbian emperor Stefan Uroš IV Dušan of Serbia, and built between 1343 and 1352,[1] on the site of the earlier church, part of the Višegrad fortress complex. It was built as burial church for the Emperor Dušan, and it represented the culmination of the Serbian sacral archritecture[2] style, that led to the birth of the Morava school style.[2] Inside the complex, which ranges over approximately 6,500 m²,[3], are two churches, dedicated to Saint Archangels (which was Dušan's tomb), and Saint Nicolas, both built in the Serbian Raška Architectural Style, although, like Visoki Dečani monastery, regarding time of the construction, and some architectural elements, it may belong to the Vardar Architectural Style.[4] The monastery was looted and destroyed after the Ottomans arrived in 1455, and in 1615 it was razed to the ground,[citation needed] and its' material was used for the construction of the Sinan Pasha Mosque in Prizren.[citation needed] 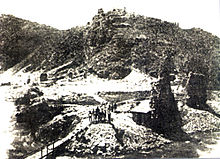 The entire complex was archeologically explored in 1927, and its remains were conserved after the Second World War. During the last decade of the 20th century work on the reconstruction was continued, and in 1998 it again became an active male monastery.[2] After the 1999 NATO bombing of Yugoslavia and retreat of the Yugoslav army forces, reconstructed objects were burned and looted in June 1999, by members of the Kosovo Liberation Army(KLA), after the Kosovo Force(KFOR) arrived.[5] During the 2004 unrest in Kosovo, the monastery was burned and looted again.[5] The entire monastery complex is under protection of the Republic of Serbia, as a Monument of Culture of Great Importance,[6][7] and today in the monastery lives one priest and the monastery is under constant protection of Kosovo Police and in a special protection zone[8][9] 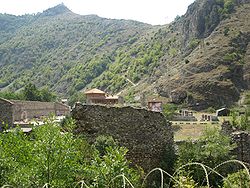 Complex of the monastery

The monastery complex is built in the smaller plateau in the Prizrenska Bistrica canyon, approximately 2.5 km southeast of Prizren. The plateau is in a peninsula, surrounded by the river from the three sides, while on the fourth southeastern side it is surrounded by sharp rocks, on top of which is the fortified citadel Višegrad. At the time of its construction, near Prizrenska Bistrica river, a caravan road was nearby, which connected Skopje with Prizren (Then capital of Serbia), over Kačanik, Sirinićka Župa and Sredačka Župa[10], and it may be that road was passing right through the monastery.[4]

During archeological excavation of the monastery complex, the oldest findings are dated from the Eneolithic age, while it is evident that in the early Iron Age there was a settlement. During classical period, settlement was disbanded, and later during the 4th, 5th and 6th centuries was again founded and it was late classical period or early Byzantine village, which was surrounded by a late antique wall, but that still has not been scientifically confirmed.

After this period, there are findings from the 10th, 11th and 12th centuries, when it is considered that the original medieval fortress (which then included only the five-cornered citadel on the hill above the monastery) built in the 12th century[11]. Dusan's grandfather, King Milutin (1282–1321), donated a small fort of Visegrad with a church dedicated to Saint Nicholas, Bishop of Prizren. It was donated as a refuge in case of war, as, later, Maglič was a shelter of the Serbian archbishop from Žiča. Later, Dusan gave three villages to a Bishop of Prizren in return from the fortress of Visegrad,[1] which was subsequently submitted to a monastery, connecting them into a whole with a defensive wall. 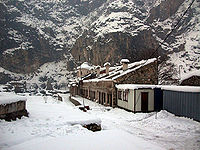 In place of Dušan's monastery, there was an older monastery, dedicated also to Saint Archangels, in which Dušan recovered after serious illness, so after that he decided to raise its endowment at this point. Preparatory work on the construction of new churches were started in 1343, according to Dušan Charter of Monastery of St. Peter Koriškog issued 19.05. that year, and was consecrated in the fall of 1347, as Dušan was preparing to go to Prizren in 01.08. that year, to attend consecration of the church, and in the December the same year he was on the Mount Athos[12]. Start of the church construction can be placed in 1348,[1] and all works are undertaken under the supervision of Abbot Jakov, which later became a bishop in Serres. The main works are finished early next year, as we know from the letter of a Venetian merchant from Trepča, from 24 March 1348, where he complained that he can not sell the lead from your Trepča mine, since the head of the Trepča mines received direct order that, by the cost of his life, he should not sell lead to anyone, except the abbot of the Saint Archangels Monastery to cover the roof.[12] It is believed that the grave with the construction of the monastery church, supporting facilities and protective walls ended in 1352, and that it was the home of at least 200 monks.[3]

View of the monastery complex from the air:
(left above) Part of the renewed dormitory (burned during the 2004 March unrest)
(up) remains the church of St. Nicholas
(middle) Remains of Church of the Holy Archangel
(right) remains a monumental dining
(down) remains of the entrance tower and reconstructed stone bridge across the Bistrica

Dušan during construction, its endowment issued hrisovulja, which established its position among other Serbian monasteries and its seigniory, which included some lands that were found by Šar Mountains to Adriatic Sea,[12] and more estates were concentrated around Prizren, Skopje Tetovo and Lake Skadar.[3] Awarded her 55 (Total 93,[2] with attachments of other[12] village, which is less than the number awarded Milutin its endowment Banjska, but at the end where it is located were richer and more advanced.[12] In addition, Holy Archangels monastery seigniory, it seemed, among other things was:

Within the monastery was built, and Hospital, and in chrysobull states[clarification needed] and the provision of compulsory treatment of sick.[10] In addition, the monastery had a right to free oil (from Bar[3]), salt, fish (from Skadar and Lake Plav[3]), silk, wine, honey and wax[13], as well as income from Prizren square and customs.[10]

After his death on 20. December 1355, the emperor Dušan was buried in a separate tomb, located in southwest part of the nave of the Church of the Saint Archangels, which is the unique solution in the Serbian architecture. After collapse of Serbian Empire, the monastery of the 1373 served as a refuge for Dubrovnik merchants from Prizren, who left town in fear of Nikola Altomanović (1366–1373),[12] and two years later it came to the settlement of the Serbian and Ecumenical Patriarch.[1] Then the grave of Dušan Serbian and Greek priests performed a joint service and remove the Anathema from the Dušan, and the monastery dwelt at one time and Serbian Patriarch Ephraim (1375–1380, 1389–1392).[3] In one Chronicle were mentioned fields from other quarters 15th century and, according to the monastery's church there under the sunstraight[12] to her artistic process and the beauty beyond Church of Christ Pantocrator in Dečani,[10] and especially emphasizes its covered under the mosaics[10][12] the highest reach of the Serbian medieval architecture in this field.[4] The same record states that are then discussed to no longer anywhere to be found Pathos of Prizren, Dečani church, Peć narthex, Banjska gold and Resava writings,[12] which are symbolically represented the most significant limits of the Serbian state at the time. 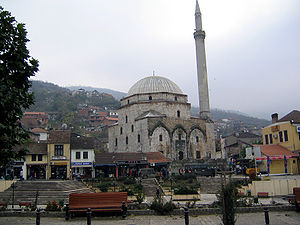 Sinan Pasha Mosque, built from the remains of the Saint Archangels Monastery[14].

After the capture of Prizren and its surroundings in 1455 by Ottomans, monastery was looted. The same writer, who, only a few decades earlier, stated that the monastery has no flat under the sun,[clarification needed] after plundering the monastery said that this is practically destroyed,[1] which speaks volumes about the scale of the Ottoman attack. The monastic life of this destruction is not stopped, but it is certain that the complex has not regained its old glory and was in constant decline. At the beginning of 17th century, a systematic demolition was conducted of the monastery church to obtain a construction material that Sinan Pasha (1615) used for construction of Sinan Pasha Mosque in the center of Prizren[14], which is also now under the protection of Republic of Serbia, as Monument of Culture of Exceptional Importance, added in 1990.[6] It is not known whether the time the monastery was still active, but it is certain to be abandoned after the 1542[15]. During the following centuries I site was further destroyed the remaining delivery of construction materials for the building, as buildings in the Prizren, and ordinary houses and time are the remains of former buildings buried layers of the country.[clarification needed] Nonetheless, the position remained famous monasteries in the surrounding people, so that the entire area to be hit occasionally found robbery from which ruins were dig up in search of hidden treasures of the monastery.[2] Some of the folk traditions of the monastic treasures are crossing the border fantasy and the other recorded the legend of gemstone that decorated the top of cross and the central dome. According to her, he sparkled so great, that man could by dark night thirty kilometers to go to North but, to the Švanjski Bridge, which is located at old fort, as in the middle of broad daylight.[3]

Local Serb population is gathered twice a year in the monastery ruins in summer (26.07.) and winter (21.11.) on monastery Slava day (Holy Archangels).[3] According to one travel writers, the service began during the night and so that only Light provided the burning candles, while the people and clergy in the prayer welcomed the dawn.[3]