"Moment 4 Life" is a song by Trinidadian rapper Nicki Minaj featuring Canadian rapper Drake. It serves as the third single from Minaj's debut album Pink Friday (2010). The song was produced by T-Minus and written by both artists. The song is inspired by a story Minaj created, in which two kids grow up together sharing the same dream of becoming famous rappers, and create this song while living out their dreams together. It peaked at number 13 on the Billboard Hot 100 and topping Billboard's Hot Rap Songs and Hot R&B/Hip-Hop Songs charts. It also saw success internationally, becoming a top 40 hit in Canada, Ireland, and the United Kingdom, as well as charting in Belgium and France.

The song features twinkling keyboard notes. Minaj begins her first verse talking about recent success, from before her debut album. Lyrically the song is about a desire to maintain a feeling of accomplishment, as Drake follows behind Minaj and raps the same theme of enjoying the moment.[2] "Straying away from the standard rap song construction of three verses and a hook, Nicki performs a brain-dump of sorts on the track, spitting as if she’s making a speech to both her fans and detractors."[3]

During a session from the Pink Friday Diaries Minaj discussed the song in detail, adding a background story to the original song.[4] "Moment 4 Life : is about 2 kids that grew up on the same block. They shared their dreams of making it as rappers. They laughed together, they cried together. One day they realize that their dreams have come to fruition. Though they know all things come to an end, they celebrate. They wish that they could have this moment 4 Life."[4] 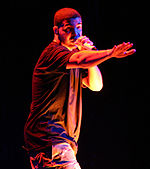 Drake's contribution to the song was favored over Minaj's by critics.

The song garnered mainly mixed reviews from critics. Brad Wete of Entertainment Weekly stated "The triumphant 'Moment 4 Life,' along with the album’s two lead singles, all showcase her knack for melody while boasting lyrics chronicling her struggles–be they professional or intimate ones of love and hurt. All of which are way more poignant than raps about how dope she is."[5] Alexis Petridis of The Guardian gave the song a negative review commenting on Minaj's tone, stating "she sounds bored rigid, which rather makes you wonder where showing off one's musical versatility ends and cravenly softening your sound for the marketplace begins."[6] Scott Plagenhoef of Pitchfork Media commented on the songs status on the album and how Minaj was out-shined by its collaborator, stating "Minaj is upstaged by Drake and Kanye West on "Moment 4 Life" and "Blazin'", respectively, but these tracks-- plus the Rihanna collaboration "Fly" and the solo ballad "Save Me"-- are the best examples of what Pink Friday is rather than what many of us wanted it to be."[7] Jesse Cataldo of Slant Magazine gave the song a negative review on Minaj's part of the song and on the album as a whole, stating "Minaj's deranged wildness could potentially provide a foil for Drake, cutting into his tendency to work slowly and calmly on "Moment 4 Life." Instead, Minaj backs off from an early round of forcefulness, letting Drake dictate the pace of the song. It's this seeming lack of confidence, contradictory to the poise she shows elsewhere, which identifies the problems with Pink Friday, an often wobbly first effort that shows enormous promise."[8]

Nick Levine of Digital Spy UK gave the track 4 out of 5 starts, commenting that "yes, the track itself - melodic and portentous(ish) midtempo R&B produced by Canadian up-and-comer T-Minus - is decent, but 'Moment 4 Life' is inevitably all about its frontline duo, arguably the most exciting male and female rhyme merchants of our times. And boy do they know it. Drake, resisting the urge to put his Maths skills to the test this time out, boasts about getting pissed and laid in the Dominican. Minaj, meanwhile, likens herself to a "heavyweight champ", David of Goliath-slaying fame and, rather less obviously, "the umpire", which for British listeners of a certain ilk can't help but invite comparisons to the legendary Dickie Bird MBE. Not that you'd try to tell her to her face."[9]

A music video for the single was shot and directed by Chris Robinson.[17] The president of Young Money Entertainment, Mack Maine, told MTV News, "We're still trying to work out the date for the next video with [Nicki] and Drake for the 'Moment 4 Life' video. That's the next project."[18][19] "Moment 4 Life" is the first music video shot in a string of music videos to be released for promotion.[20] In an interview on The Ellen DeGeneres Show, Minaj revealed that Roman Zolanski's mother, Martha Zolanski, will make a physical debut in the music video.[21] In an interview with MTV news, Minaj discussed the marriage concept of the music video between her and her label-mate Drake, stating "Obviously, Drake and I, we’ve played around so much with the whole marriage thing and stuff like that, so people have come to be kind of intrigued about us and it’s where we’re shooting the video together. So I was like, there has to be some sort of romantic storyline. It’s Drake and me."[17] Drake additionally added "I mean, it’s a fantasy video. You’ve got a very regal environment, and you’ve got Nicki doing what she does—big outfits, big everything. Yeah, I love that girl, man. I’m not going to lie to you. The twist of it, the concept of it, I don’t want to give it all away." [17]

The music video premiered Thursday night, January 27, 2011 @ 7:54 PM ET, on MTV (along with an interview with Minaj).[22] The video takes part in a type of Minaj-assisted fairy tale from a book.[23] The video begins with Minaj sitting by a boudoir as Martha Zolanski appears as Minaj's fairy godmother. After discussing how Roman and Slim Shady have been sent to boarding school, Martha informs Nicki that this kind of fairy tale is different from ones she's seen, stating "These kinds of nights are fleeting and usually end by mid-night. But my fairy god mother senses tell me that you may have this moment for life." The song begins as Martha gifts Minaj with a special pair of heels.[23] During Minaj's verse she is seen walking into a ballroom as she is spotted by Drake. When the two meet in a hall, Drake performs his verse with Minaj by a fireplace. During the climax of the song, Drake and Minaj walk down the aisle, where they share a wedding kiss by fireworks as the clock strikes midnight.

On the day of its premiere, James Montgomery of MTV News gave the video a very positive review and breakdown, stating, "So it's not exactly a stretch to call 'Moment 4 Life' the most Nicki Minaj video of all time. It takes basically every aspect of her personality — the fashionista, the glamazon, the princess, the badass, the cartoon character, the girly girl — and crams them together into one very shiny package. And then it wraps that package with nods to her past (the British accent, the mention of her Roman Zolanski alter-ego, the consummation of her Twit-lationship with Drake) for good measure. The end result is perhaps the most complete portrait of Minaj to date... There are very few silly wigs and nary a stitch of Spandex to be seen anywhere. It is basically our first glimpse at the real Nicki: a young woman who is more than just the sum of her parts, even if those parts are pretty interesting."[24] Chris Robinson of Idolator compared and contrasted the "Moment 4 Life" wedding with other wedding music video's stating, "We’re going to call it right now.