The Moltke class was a class of two "all-big-gun" battlecruisers[A 1] of the German Imperial Navy built between 1909–1911. Named SMS Moltke and SMS Goeben,[A 2] they were similar to the previous Von der Tann unique battlecruiser, but the newer design featured several incremental improvements. The Moltkes were slightly larger, faster, and better armored, and had an additional pair of 28 centimeter guns.

Both ships served during World War I. Moltke participated in several major battles with the rest of the High Seas Fleet, including the battles of Dogger Bank and Jutland in the North Sea, and the Battle of the Gulf of Riga and Operation Albion in the Baltic Sea. At the end of the war, Moltke was interned with the majority of the High Seas Fleet at Scapa Flow while the ships' fate was being discussed during peace treaty negotiations. The ships were scuttled on 21 June 1919 to prevent their seizure by the Allies.

Goeben was stationed in the Mediterranean at the start of the war; she escaped from pursuing Royal Navy ships to Constantinople. The ship, along with the light cruiser Breslau, was transferred to the Ottoman Navy soon after arrival. Strategically, Goeben played a very important role: she helped bring the Ottoman Empire into the war as a member of the Central Powers, and by acting as a fleet in being the ship prevented Anglo-French attempts to force the Bosporus, and similarly stymied a possible advance by the Russian Black Sea Fleet. Goeben was retained by the new Turkish government after the war. Only slightly modified from her original configuration, the ship remained on active service with the Turkish Navy until being decommissioned on 20 December 1950; she was stricken from the Navy register on 14 November 1954. Two years earlier, when Turkey joined NATO in 1952, the ship was assigned the hull number B70.[4] The ship was unsuccessfully offered for sale to the West German government in 1963. Without a group willing to preserve her as a museum (she was the only surviving dreadnought-type warship in the world, apart from being the only surviving WWI era warship of the Central Powers) the ship was sold to M.K.E. Seyman in 1971 for scrapping. She was towed to the breakers on 7 June 1973, and the work was completed in February 1976.

During a May 1907 conference, the Germany Navy Office decided to follow up the Von der Tann unique[A 3] battlecruiser with an enlarged design.[5] The 44 million marks allocated for the 1908 fiscal year created the possibility of increasing the size of the main guns from the 28 cm (11 in) weapons of the preceding design to 30.5 cm (12 in). However, Admiral Alfred von Tirpitz, along with the Construction Department, argued that increasing the number of guns from 8 to 10 would be preferable, as the 28 cm guns had been deemed sufficient to engage even battleships. Tirpitz also argued that, given the numerical superiority of the Royal Navy's reconnaissance forces, it would be more prudent to increase the number of main guns, rather than increase their caliber.[5] The General Navy Department held that for the new design to fight in the battle line, 30.5 cm guns were necessary. Ultimately, Tirpitz and the Construction Department won the debate, and Moltke was to be equipped with ten 28 cm guns. It was also mandated by the Construction Department that the new ships have armor protection equal or superior to Von der Tann's and a top speed of at least 24.5 knots (45.4 km/h).[5]

During the design process, there were many weight increases due to growth in the size of the citadel, armor thickness, additions to the ammunition stores, and the rearrangement of the boiler system. It was originally planned to build only one ship of the new design, but due to the strains being put on the Navy design staff, it was decided to build two ships of the new type.[5] They were assigned under the contract names of "Cruiser G" and "Cruiser H". As Blohm & Voss made the lowest bid for "Cruiser G", the company also secured the contract for "Cruiser H". The former was assigned to the 1908–09 building year, while the latter was assigned to 1909–10.[6] 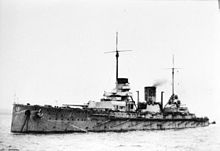 The Moltke class ships were 186.6 meters (612 feet) long, 29.4 m (96 ft) wide, and had a draft of 9.19 m (30.2 ft) fully loaded. The ships displaced 22,616 tons normally, and 25,300 tons fully loaded.[2] The Moltke class ships had 15 watertight compartments and a double bottom that ran for 78% of the keel of the ships. They were considered to handle well, with gentle movement even in heavy seas. However, they were slow to answer the helm and were not particularly maneuverable. The ships lost up to 60% speed and heeled 9 degrees at full rudder.[A 4] The ships had a standard crew of 43 officers and 1010 men. While Moltke served as the I Scouting Squadron flagship, she was manned by an additional 13 officers and 62 men. While serving as the second command flagship, the ship carried an additional 3 officers and 25 men to the standard complement.[8]

Moltke and Goeben were powered by four-shaft Parsons turbines in two sets and 24 coal-fired Schulz-Thornycroft boilers, divided into four boiler rooms.[1] The boilers were composed of one steam drum and three water drums apiece,[2] and produced steam at 16 standard atmospheres (240 psi). After 1916, the boilers were supplemented with tar-oil.[A 5] The Parsons turbines were divided into high- and low-pressure pairs.[2] The low-pressure turbines were the inner pair, and were placed in the aft engine room. The high-pressure turbines were on either side of the low-pressure pair, and were located in the forward wing rooms. The turbines powered four propellers, 3.74 m (12.3 ft) in diameter.[9]

Moltke replaced the armored cruiser Roon in the I Scouting Group on 30 September 1911. On 19 April 1912, Moltke and light cruisers Stettin and Bremen departed Germany for a goodwill visit to the United States, and arrived on 30 May. In early July, Moltke escorted Kaiser Wilhelm II's yacht to Russia. Once the ship returned, the commander of the I Scouting Group made Moltke his flagship—a role in which she served until Rear Admiral Franz von Hipper transferred his flag to the newer battlecruiser Seydlitz on 23 June 1914.[11]

Moltke participated in most of the major fleet actions conducted by the German Navy during the First World War, including the Battles of Dogger Bank and Jutland in the North Sea, and the Battle of the Gulf of Riga and Operation Albion in the Baltic. The ship took part in several operations to bombard the English coast, including the first raid on Yarmouth, the attack on the towns of Scarborough, Hartlepool, and Whitby, and the second raid on Yarmouth and Lowestoft. Moltke was damaged several times during the war: the ship was hit by heavy-caliber gunfire at Jutland, and torpedoed twice by British submarines while on fleet advances.[12]

Following the end of the war in 1918, Moltke, together with most of the High Seas Fleet, was interned at Scapa Flow pending a decision by the Allies as to the fate of the fleet. The ship met her end when she was scuttled by her crew, along with the rest of the High Seas Fleet in 1919 to prevent them from being seized by the British Royal Navy.[7] The wreck of Moltke was raised on 10 June 1927, and scrapped at Rosyth from 1927 to 1929.[13]

Following the outbreak of the First Balkan War in October 1912, the German High Command decided to create a Mediterranean Division in an attempt to exert influence in the area. The new squadron consisted of Goeben and the light cruiser Breslau; the two ships left Kiel on 4 November and arrived off Constantinople on 15 November. The ships visited several Mediterranean ports, including Venice, Pola, and Naples. The First Balkan War ended on 30 May 1913, and there was some consideration given to withdrawing the pair to German waters. However, the conflict reignited less than a month later on 29 June, meaning the ships would have to remain in the area.[14]

Following the assassination of Archduke Franz Ferdinand on 28 June 1914, Rear Admiral Wilhelm Souchon recognized the imminent outbreak of war, and so immediately sailed to Pola for repair work for Goeben. The ships were then ordered to steam to Constantinople. While en route, they were pursued by British forces, but Goeben and Breslau managed to evade them and reach Istanbul by 10 August 1914.[14] Goeben was transferred to the Ottoman Empire and renamed TCG Yavuz Sultan Selim after Sultan Selim I. Popularly known as Yavuz, she was designated as the flagship of the Ottoman Navy, but she retained her German crew. Goeben, flying the Ottoman flag, bombarded the Russian port of Sevastopol, captured and sank a Russian minesweeper, and damaged a destroyer on 29 October 1914. The Russian government responded by declaring war on the Ottoman Empire on 1 November; Britain and France followed suit on 5 November.[15] By acting as a fleet in being, Goeben effectively blocked a Russian advance into the Bosporus, and defended against a similar incursion of British and French pre-dreadnoughts.[16] More powerful British and French warships—which could have dealt with Goeben—could not be risked in the heavily mined and U-boat patrolled Turkish waters.[17]

In 1936 she was renamed TCG Yavuz and remained the flagship of the Turkish Navy until 1950, although the ship was largely stationary in Izmit from 1948. In 1952, Turkey joined NATO, and the ship was assigned the hull number "B70". Yavuz was decommissioned on 20 December 1950, and removed from the navy register on 14 November 1954. The Turkish government attempted to preserve the ship as a museum, including an offer to West Germany to sell the ship back in 1963, but none of the efforts were successful. Goeben was sold for scrapping in 1971, and was eventually broken up between 1973 and 1976—the last remaining ship of the Imperial German Navy.[4]