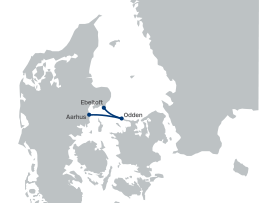 Mols-Linien is a Danish company that operates ferry services between the Jutland (Jylland) and the island of Zealand (Sjælland).

A downturn in traffic following the 1973 oil crisis led Mols-Linien into a pooling agreement with rival Grenaa-Hundested Linien in 1979.[2]

Scandlines sold its holding to the Clipper Group in 2008.

In July 2011 Mols-Linien announced it was to close the Kalundborg - Aarhus route and sell the two vessels operating the route.[3]

Mols-Linien closed the Aarhus - Kalundborg route on 15 September 2011. The route is now operated by Kattegatruten.

On the trip between Århus and Odden, you can see the island Samsø and the Jutland peninsula Helgenæs.