A parliamentary election was held in Moldova on 5 April 2009. The Party of Communists of the Republic of Moldova (PCRM) won a majority of seats (60 out of 101) for the third consecutive occasion. Turnout was 59.49 percent, exceeding the 50% necessary for the election to be valid. The new parliament will elect a new President of Moldova as the incumbent Vladimir Voronin has to stand down after completing two terms.[1]

The EU called on Moldova to reform its electoral law, which foresees an electoral threshold of 6% and makes little allowance for alliances of smaller parties, so that smaller parties might also enter parliament, but President Vladimir Voronin rejected these calls.[2]

Final results were announced on 8 April 2009; the ruling PCRM failed to gain the 61 seats required to elect the president, leaving the opposition parties with the possibility of forcing a new election. The ballot recount performed on April 21 confirmed these results.

The International Election Observation Mission, represented by delegations from the OSCE Parliamentary Assembly, Office for Democratic Institutions and Human Rights (ODIHR), Parliamentary Assembly of the Council of Europe (PACE), and the European Parliament evaluated the elections as positive on the whole, with some reservations not affecting the outcome or the overall initial assessment. The opinion polls before the elections had showed a comfortable win for the Communist Party, with the only uncertainty being the size of the winning margin.[3]

The OSCE observer mission has issued a preliminary report declaring the elections generally free and fair and describing Moldova as an "overall pluralistic environment, offering voters a distinct political alternative and meeting many of the O.S.C.E. and Council of Europe commitments."[4] Petros Efthymiou, head of the delegation of the OSCE Parliamentary Assembly and Special Co-ordinator of the OSCE short-term observers, said that he was delighted at the progress of democracy in Moldova. "These elections were very good and they gave me great confidence in the future of this country," Efthyimou said.[5]

However, one member of the 280-strong observation team, Emma Nicholson, Baroness Nicholson of Winterbourne, whose observation post was near the border of the separatist republic of Transnitria, voiced concern over this evaluation, claiming that she had a "very, very strong feeling" that there have been some manipulation, but she "couldn't find any proof" of it.[4] She claimed that the Russians from the organization influenced this report.[6] She also declared that at the counting of the votes that at 1:00 the PCRM had 35% of the votes and the 15–16 parties from the opposition 40–45% altogether while shortly later, at 8:00 the situation changed radically and the PCRM had 50%. [7] There have also been claims of voter fraud, with deceased and nonattendant persons reportedly voting. [8][9][10]

Following the recount, it was decided by the Constitutional Court that the presidential election would have to take place by 7 July 2009. Otherwise parliament would be dissolved and early elections held. The opposition parties stated that they would boycott parliament, citing electoral fraud as the reason, and tried to force new elections.[11] The presidential election was later set for 20 May 2009.

Following the announcement of preliminary election results on April 6, 2009, which showed the Party of Communists of the Republic of Moldova victorious, winning approximately 50% of the votes, the opposition rejected the results, accusing the authorities of falsification in the course of counting the votes and demanded new elections.[12] Opposition and NGO activists have organized protest demonstrations in the center of Chişinău on April 6th and 7th.[13] 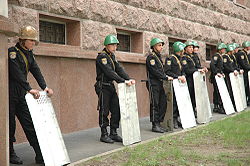 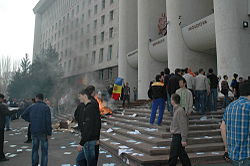 The demonstration spun out of control and escalated into a riot on April 7th, with protesters attacking the parliament building and the presidential palace, throwing stones at the buildings, with the riot police attempting to protect the buildings.[14] In the afternoon of April 7th, the rioters broke into the parliament building, looted it and set it on fire. Police forces had regained control of the city center by April 8th, arresting several hundred protesters. Following the arrests, numerous cases of excessive force usage, including beatings and torture by the police, were reported by the detainees.[15]

Peaceful demonstrations on the central square continued for the remainder of the week. The government and opposition parties have accused each other of sending provocateurs to incite the crowds.[16]

On 10 April 2009, Voronin called on the Constitutional Court to authorise a recount of the votes, as demanded by the protesters.[17][18] On 12 April the court ruled in favor of conducting a recount, which was scheduled to take place on 15 April.[19][20] On 14 April, Serafim Urechean announced that the three main opposition parties would boycott the recount, citing fears that the government would use it to increase its majority to the 61 seats required to elect the next president.[21][22]

The results of the recount were published on April 21. No serious errors were determined and the original election result was confirmed.[23]

Election of a new president

One of the first tasks of the newly elected parliament is to elect a new president. Current President Vladimir Voronin is ineligible for another term, as he already served two terms, the maximum number allowed under the constitution. His successor needs to be elected before 8 June 2009 with a three-fifths majority (61 of 101 votes). If no candidate reaches a majority vote before that date, a new parliamentary election will be held. The three opposition parties announced that all of them would vote against the PCRM's nominee for president, for which 61 votes out of 101 are required; if Parliament fails three times to elect a candidate, this will result in a new election.[24][25]

The Communist Party had nominated former Prime Minister Zinaida Greceanîi as their presidential candidate. The previous parliament failed to elect a new president triggering early parliamentary elections which were held on 29 July 2009.

The Parliament must elect, with a majority of three fifths the President of Moldova. The ruling Party of Communists of the Republic of Moldova (PCRM) nominated Zinaida Greceanîi[26], and a puppet-candidate, a Doctor from Chişinău. As the PCRM holds only 60 of 101 seats in parliament, but 61 seats are required to elect the president, at least one dissenting vote from the opposition was required. The opposition (formed by the three liberal-oriented parties the Liberal Party, the Liberal Democratic Party of Moldova, and the Party Alliance Our Moldova) boycotted the first round of the election held on 20 May 2009, thus forcing repeated parliamentary elections[27], [28]. The second round was set for 28 May 2009, but it was postponed to 3 June 2009[29]; the PCRM claimed that it was due to Ascension Thursday falling that day. On 3 June 2009, the second round (repeated election) was held, the results being the same: 60 votes for Zinaida Greceanîi, forcing incumbent Vladimir Voronin to dissolve the Parliament[30]. Early elections were set for 29 July 2009 after Vorinin dissolved parliament on 15 June 2009.

The list of deputies elected in the 5 April 2009 parliamentary elections:

Party of Communists of the Republic of Moldova 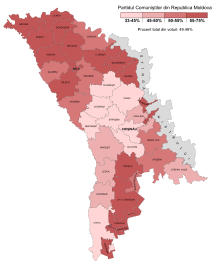 Votes won by PCRM by raion and municipality 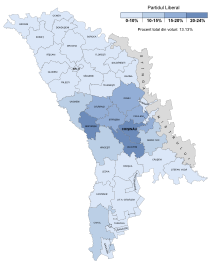 Votes won by PL by raion and municipality 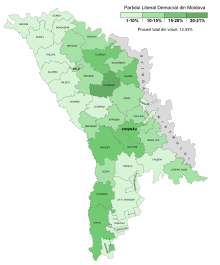 Votes won by PLDM by raion and municipality 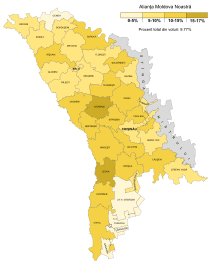 Votes won by AMN by raion and municipality