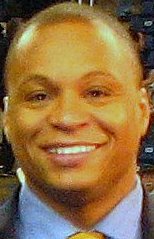 Gus Johnson (born , ) is an American sports announcer. He is best known for his coverage of ' "March Madness".

Johnson grew up in , and attended the . He graduated in 1985. That same year, according to the winter 1997 edition of University of Detroit Jesuit's alumni magazine, "Highlights", Johnson was all-Catholic quarterback for the school's football team, an all-Catholic shooting guard on the basketball team, and first baseman and catcher on the baseball team. The 1984-1985 University of Detroit Jesuit yearbook also notes that Johnson was a co-captain of both the football and basketball teams and most valuable player on the latter.

Johnson subsequently graduated from with a degree in political science in 1990 and was a four-year letter winner on Howard's baseball team.

Johnson covers numerous sports for , with his most recognized role as a play-by-play announcer for CBS' March Madness, which he has worked each year since 1996. While Johnson is best known for his excitable play-by-play announcing, he is particularly known for his calls at the end of several close NCAA Tournament games including, UCLA-Princeton in 1996, Florida-Gonzaga in 1999, Syracuse-Vermont in 2005, UCLA-Gonzaga in 2006, and Ohio State-Xavier in 2007. Other CBS duties include play-by-play announcing for the , college football, track and field, boxing, mixed martial arts , and bobsled/luge at the .

In addition to his duties at CBS, Johnson has worked for the (MSG) since 1994, where he is the current radio play-by-play and backup television play-by-play accouncer of the 's in addition to providing television play-by-play for MSG's coverage of the 's . Johnson has also provided commentary for MSG's coverage of the Golden Gloves Tournament and served as host of the "Yankees ScoreCard" and "SportsDesk", as well as the and Knicks "GameNight." Beginning in 2006, Johnson served as the pre-season TV voice for the and . Johnson also provides play-by-play commentary for the Arena Football League's .