Moldova and Romania have experienced an extremely complicated relationship since Moldova's independence in 1991. Pan-Romanianism has been a consistent part of Moldovan politics, and was adopted in the Popular Front of Moldova's platform in 1992. Romania's relations with neighbour Moldova have been strained since 1994. Most of Moldova was part of Romania during the interwar period and linguists generally agree that the Moldovan language is identical to Romanian. Early signs that Romania and Moldova might unite after both countries achieved emancipation from communist rule quickly faded. Romania remains interested in Moldovan affairs but the two countries have been unable even to reach agreement on a basic bilateral treaty. 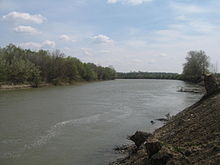 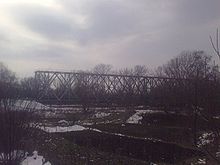 The Moldova-Romania border is a fluvial boundary, following the course of the Prut and Danube. This external border of the European Union runs from Criva in the North to Giurgiuleşti in South.

Main articles: History of Romania, History of Moldova, and Union of Bessarabia with Romania 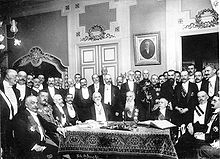 In 1918, at the end of World War I, Transylvania, Bukovina and Bessarabia united with the Romanian Old Kingdom. Bessarabia, having declared its sovereignty in 1917 by the newly-elected Council of the Country (Sfatul Ţării), was faced with bolshevic agitation among the Russian troops and Ukrainian claims to parts of its territory. The president of the Council of the Country called on the Russian Commander-in-Chief in Iaşi, Dmitry Shcherbachev, to send troops to protect the country. Having no troops, he transmitted the request to the Romanians, whose military intervention was met with protest by the presidents of the Council of the Country and of the provisional government of Bessarabia and by the Soviet of Chişinău.[1] Bessarabia declared independence from Russia on January 24, 1918, and, on April 9, 1918, Sfatul Ţării voted union with Romania: of the 148 deputies, 86 voted for union, 3 against, 36 abstained (mostly the deputies representing the minorities, 50% of Bessarabia's population at the time[2]) and 13 were not present.

Romania retained Bessarabia from 1918 to 1940, when it accepted to give up Bessarabia and Northern Bukovina to the Soviet Union after an ultimatum. During World War II, Romania (in alliance with the Axis Powers) took back Bessarabia and was awarded further territorial gains at the expense of the Soviet Union (Transnistria; this was lost again as the tide of war turned) as compensation for Northern Transylvania, lost to Hungary in 1940.

In August 1976, Nicolae Ceauşescu, his wife, and his son were the first high-level Romanian visitors to the Moldavian SSR since World War II. The Moldavian CP First Secretary Ivan Bodiul met them at the frontier and escorted them to Chişinău. In December 1976, Bodiul and his wife Claudia arrived for a return visit of five days at Ceauşescu's invitation. Bodiul's visit was a "first" in the history of postwar bilateral relations. At one of his meetings in Bucharest, Bodiul said that "the good relationship was initiated by Ceauşescu's visit to Soviet Moldavia, which led to the expansion of contacts and exchanges in all fields."[3]

On November 5, 1978 the Stânca-Costeşti Hydroelectrical Plant (at Stânca-Costeşti) on Prut was inaugurated six years after ratification of the basic Romanian-Soviet agreement on its construction. Romania was represented by Ion Iliescu, while Bodiul represented the USSR.

A visit was paid from 14 to 16 June 1979, to the Moldavian SSR by an Romanian Communist Party delegation headed by Ion Iliescu, Political Executive Committee alternate member and Iaşi County Party Committee First Secretary.[4]

Romania was the first state to recognize the independent Republic of Moldova – only a few hours, in fact, after the declaration of independence was issued by the Moldovan parliament. From the declaration of the Romanian Government made on that occasion it clearly resulted that, in the opinion of the authorities in Bucharest, Moldova's independence was considered as a form of emancipation from Moscow's tutelage and a step towards the reunification with Romania:

Within a few days agreements were signed for the establishment of diplomatic ties. Within a few weeks, visa and passport-free border regimes were established, allowing Romanian and Moldovan citizens to travel across the border with identity cards only. Already in 1991, Romania started donating books for Moldovan libraries and textbooks for schools and began to offer scholarships to Moldovan students to study in Romanian high schools and universities.

On April 14, 1994, the Romanian Chamber of Deputies adopted a declaration of protest against the decision of the Moldovan Parliament in favor of accession to the CIS. The protest contained serious accusations to the legislative body of the newly established neighboring country:

The civil unrest in Moldova in April 2009 led to a diplomatic row between the countries, after President Voronin accused Romania of being the force behind the riots in Chişinău.[7] Romania denied all charges of being involved in the protests.[7]

The Romanian ambassador in Moldova, Filip Teodorescu was declared persona non grata by the Moldovan government, being required to leave the country within 24 hours.[7] The following day, the Romanian parliament nominated a senior diplomat, Mihnea Constantinescu, as the new ambassador to Moldova[8], but two weeks later, the Moldovan government rejected him without any explanation, deepening the crisis.[9]

The Moldovan government instituted visa requirements for Romanian citizens and closed the border between Romania and Moldova on April 7. Moldovan students studying in Romania and international journalists were not allowed to enter the country. The following day, train connections between Romania and Moldova were cancelled for undefined period, because of "technical" issues.[10] Romania announced that it will not reciprocate on the expelling of the ambassador and it will keep the same visa regime, with visas free-of-charge for Moldovan citizens.[7] It also condemned as "arbitrary and discriminatory" the new measures brought against Romanian nationals in Moldova and has stated that the visa scheme was "reckless" and broke a Moldova-EU pact.[11]

On February 9, 2010, the Romanian Parliament approved a new ambassador to Moldova, Marius Lazurcă.

A movement for the unification of Romania and Moldova began in both countries after the 1989 Romanian Revolution and the glasnost policy in the Soviet Union, advocating the peaceful integration of the two states. Individuals supporting the movement are called "Unionişti" (Unionists). In Moldova, those against the movement are called "Moldovenişti" (Moldovenists).[13] Unionist organizations in Romanian and in Moldovan civil society include "Noii Golani" (The New Hooligans), [14] "Deşteptarea" (The Awakening),[15] or the movement "Basarabia - Pământ Românesc" ( Bessarabia Romanian Land ).[16]

When the Ribbentrop-Molotov Pact was signed, the territories between the Prut and the Nistru belonged to Romania. Since the recognition of the independence of the Republic of Moldova many references were made in Romania to the necessity of eliminating the consequences of the Ribbentrop-Molotov Pact. As a matter of fact, in June 1991, Romania's Parliament adopted a declaration through which the above mentioned Pact was declared null and void.

In the aftermath of the 2009 Chisinau riots, director of the Moscow Institute for National Strategy Stanislav Belkovsky reaffirmed his support for the movement, declaring he believes the civil unrest to be a prelude of a political union between the countries. Belkovsky had already authored another plan for the unification between Romania and Moldova, notably excluding Transnistria, which would become an independent republic.[17]

Romanian President Traian Băsescu estimated the total number of Moldovans seeking Romanian citizenship to be about 800,000.[18] Between 1991 and 2006, 95,000 Moldovans have obtained Romanian citizenship.[19] In the autumn of 2006, the Unionist movement has gained some momentum as the subject was more regularly discussed in prominent Romanian language newspapers and as many Moldovans have applied for Romanian passports in August and September 2006, alone.[20] Oleg Serebrian, the leader of the Social-Liberal Party, declared that if the Moldovans and the Romanians decided to unite, neither the USA, nor Russia, could put a stop to such a union.[21]