MOL Group (MOL Nyrt.) (Magyar OLaj) is an integrated oil and gas group in Hungary. In addition to Hungary, the company is present in the Europe, the Middle East and Africa region, as also in the CIS countries, with interests in exploration, production, refining, marketing and petrochemicals. MOL employs over 34,000 people internationally and it is a market leader in Hungary and Slovakia. It is the second largest company in Central and Eastern Europe.[1]

MOL Nyrt. is a public limited company listed at the Budapest Stock Exchange, Luxembourg Stock Exchange and Warsaw Stock Exchange, and its GDR's are traded on London's International Order Book and on OTC Bulletin Board in the United States. As of 30 June 2008, MOL Nyrt. has market capitalization of US$14.5 billion.[2]

MOL Nyrt. was established on 1 October 1991 through the merger of 9 companies—former members of the National Oil and Gas Trust. By 1995, the actual integration of companies was completed, and the previously separated entities started to operate within one joint organization. MOL went for a privatization strategy in order to respond to international market challenges and also, it pioneered in the regional consolidation of the oil and gas industry.

In 2003, MOL purchased a 25% stake in Croatia's national oil company INA.[3] In 2006, INA and MOL launched a joint exploration project in the Slatina – Zaláta area designed to secure new volumes of natural gas. The two companies are now forming a consortium in Bosnia and Herzegovina, after winning the recapitalisation tender for Energopetrol, the leading petrol company of country, where they got an absolute majority by holding 67% of the shares.[4]

By 2004, MOL bought, in several steps, Slovakia's national refiner Slovnaft, and Hungary's leading producer of ethylene and polypropylene TVK, over which MOL gained control with a stake of 34.5% in 2001. MOL further increased its stake in TVK to 86.56% in 2006. Between 2003 and 2005 MOL completed the acquisition of Shell Romania. In 2004, MOL entered the Austrian market by purchasing a fuel storage facility in Korneuburg, and a year later by acquiring the Roth filling station chain.[5] In August 2007, MOL purchased Italiana Energia e Servizi S.p.A. (IES), owner of the Mantova refinery and a chain of 165 retail stations in Italy. [6]

In November 2007, MOL reported a new regional initiative to create a joint regional gas pipeline system called New European Transmission System (NETS). On 20 December 2007, MOL announced a strategic cooperation with Czech power utility CEZ. The joint venture with CEZ focuses on gas-fired power generation and related gas infrastructure in Central and Southeastern Europe, first launching two 800 MW power plants in Hungary and Slovakia. After selling 7% of its shares to CEZ within the scopes of a strategic partnership, MOL announced on 10 March 2008 the sale of an 8% stake to the Oman Oil Company for the same reason.[7]

In June 2007, Austrian energy company OMV made an unsolicited bid to take over MOL, which has been rejected by the Hungarian company. On 6 March 2008, the European Commission launched an in-depth investigation of OMV's unsolicited bid to take over MOL. On 24 June 2008, OMV received a 'Statement of Objections' from the European Commission regarding the company's attempted takeover of MOL.[8] In March 2009, OMV sold its 21% stake in MOL to Surgutneftegas. MOL called this move "unfriendly".[9]

On 24 May 2011, the second Orbán-cabinet bought the russian Surgutneftegas's shares, thus the Hungarian state acquired 21.2% of the shares within the company.[12] 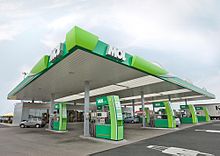 MOL operates five refineries in Hungary, Slovakia, Croatia and Italy (23.5 million tonnes per year refining capacity). Its refineries at Százhalombatta, Hungary and Bratislava, Slovakia, are among the most profitable ones in Europe, with Nelson Complexity Indexes of 10,6 and 11,5 respectively.[13] MOL's filling stations amounted to more than 1,000 in ten countries at the end of 2008.[13]

MOL's petrochemical division is one of the largest polymer producer in Central Europe, operated in full integration with MOL's Refining and Marketing division. Its products are sold in more than 40 countries.[citation needed]

For the natural gas division, the main focus is gas transmission via an extensive high pressure gas pipeline, which length exceeds 5,300 kilometres (3,300 mi).[13] MOL is a member of the Nabucco Pipeline project.[14]

In the field of renewable energy MOL develops geothermal power production through the, CEGE Central European Geothermal Energy Production, a partnership with Australian-based Green Rock Energy Limited.[15][16] The company supports the research of second generation biofuels at the University of Pannonia.[16]

MOL has foreign exploration licences in (with date of announcement):

MOL has foreign production facilities in (with date of announcement):