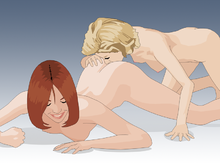 Depiction of a woman performing anilingus on another woman.

Anilingus involves a variety of techniques to stimulate the anus including kissing, licking, and sliding the tongue up and down the insides of the cheeks and crack of the buttocks, and in and out of the anus itself. Pleasure for the giver is usually based more the principle of the act.[3][4] Mutual anilingus can also be done in the position called 69.[5]

There are many health problems that can result from practicing anilingus, because of the presence of bacteria, viruses or parasites on or in the anus or rectum. These include hepatitis A, hepatitis B, hepatitis C, intestinal parasites, chlamydia infection, poliomyelitis, human papillomavirus (HPV), gonorrhea, Herpes simplex virus, conjunctivitis, and other sexually transmitted diseases.[6] Applying the mouth to the genitals immediately after applying it to the anus can inadvertently introduce the bacterium Escherichia coli ("E. coli") into the urethra, leading to a urinary tract infection. HIV/AIDS is not believed to be easily transmitted through anilingus.[7]

Frequent anilingus with casual partners increases the health risks associated with the practice. Generally, people carrying infections that may be passed on during analingus will appear healthy. Parasites may be in the feces if poorly cooked meat was consumed. Hepatitis A traces in feces apply only if the infected person has eaten contaminated food.

If the receiving partner has wounds or open sores on their genitals, or if the giving partner has wounds or open sores on or in their mouth, or bleeding gums, this poses an increased risk of STD transmission. Brushing the teeth, flossing, undergoing dental work, or eating crunchy foods such as potato chips relatively soon before or after performing anilingus also increases the risk of transmission, because all of these activities can cause small scratches on the inside of the lips, cheeks and palate. These wounds, even when they are microscopic, increase the chances of contracting STDs that can be transmitted orally under these conditions.

Another recent study suggests a correlation between oral sex and throat cancer. It is believed that this is due to the transmission of HPV because this virus has been implicated in the majority of cervical cancers. The study concludes that people who had one to five oral sex partners in their lifetime had approximately a doubled risk of throat cancer compared with those who never engaged in this activity. Those with more than five oral-sex partners had a 250% increased risk.[8]

Owing to disease risks, many medical professionals advise the use of dental dams when performing or receiving analingus. A makeshift dental dam can be made out of a condom. Using a real dental dam is preferable, as real dental dams are larger, and the makeshift version may be accidentally damaged during the cutting procedure. Plastic wrap may also be used, but this is less preferable because it is not designed to prevent the passage of bacteria through its material. Also, the thickness of plastic wrap can reduce sensation. Some choose to perform analingus after giving the receiving party an enema, which washes out most, if not all, feces from the rectum. However, a person who receives an enema may still have harmful microbes in his/her anus after the procedure is finished, as enemas are not designed to remove bacteria.