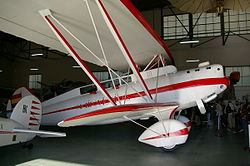 A replica of the Cuatro Vientos

The plane departed for Mexico City on 20 June 1933, without Madariaga on board and disappeared in flight, being last sighted in the vicinity of Villahermosa, Mexico. No trace of the plane or of its occupants was subsequently found.[1].