Participants are divided in Members of Parliament(MEPs), Ministers of the Council of the European Union, Interpreters, Journalists and Lobbyists.

Through the course of the week, participants discuss, debate, negotiate and try to reach compromise on the given proposals. This is achieved by following exactly the same procedures that the actual MEPs follow in the exact setting and location of the European Parliament.

The proposals of MEU 2012 are as follows: 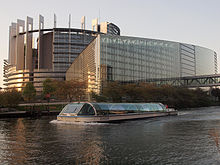 The European Parliament in Strasbourg.

The proposals will be discussed under the ordinary legislative procedure and the consultation procedure, respectively.

In MEU 2012, the consultation procedure will be simulated for the first time in the history of MEU. Under the procedure in question, the Council adopts legislation after having consulted the European Parliament and the Commission. The Opinion of the European Parliament is not binding on the Council, but the latter has a duty to consult the former and may not adopt legislation before having received its opinion.

MEU takes place every year in Strasbourg, France, in the buildings and rooms of the European Parliament. It is as realistic as it gets, since it puts its participants not only in the roles of MEPs and Ministers but also in their very places and seats.

The Organising Team usually provides one or two hotels for the participants and the auxiliary staff, so that everyone can stay together more affordably. These hotels are carefully selected venues that are capable of providing the very best experience for everyone. On top of that, they are meticulously picked to be in close proximity to the Louise Weiss Building, home of the European Parliament in Strasbourg.

In the past, tours have been organised for the participants to go around and see the city of Strasbourg, providing a form of relaxation amongst the tense events of the week.

Also, during the evenings, specific restaurants are being proposed to everyone. Well thought of and thoroughly tested places and events are suggested for the after-hours.

The Organising Team of each MEU is different. It comprises different people holding different positions according to each year’s project needs.

The Organising Team is selected primarily by the Director General and the Deputy Director General of each year’s MEU. The team is picked from a wide pool of diverse individuals, most highly qualified and skilled in their respective areas, and is entrusted with delivering the very best of experience for everyone.

Each individual country has its own liaison officer, who is responsible for the promotion of MEU in their respective territories.

Model European Union (MEU) is a project of BETA e.V. (Bringing Europeans Together Association)[1], which oversees each year’s procedures and appoints the Director General.

Bringing Europeans Together Association e.V. is a European politically independent, non-profit association which articulates and promotes European integration and international understanding. This is done regardless of , colour, gender, sexual orientation, religion, nationality, culture or social differences.

BETA consists of dedicated and politically active young Europeans who are in favour of European integration and believe in the fundamental principles and values upon which the European Union is founded.

BETA proves that people from different countries, cultures and backgrounds, engaged in politics or not, can work together to make such a large event as the MEU in Strasbourg, France, possible.

Model European Union is a simulation with a long background which enables an always better and more successful experience every year. It initially started as an idea from a group of young people who had the vision and will to create a simulation that would help students from all over Europe understand and experience the decision-making process in the European Union. After 5 years of running, it is worldwide the most successful simulation of European Politics.

Minister of the Council of the European Union

MEU 2011 Ministers of the Council

The Council of the European Union works with representatives of the 27 national governments that regularly meet and discuss both policy and legislative issues concerning European affairs. Depending on the topic at hand, the Council appears under different configurations (e.g. General Affairs, Foreign Affairs, , Economic and Financial Affairs etc.)

During Model European Union, it is the Ministers’ task to represent national interests and to closely cooperate with the European Parliament in order to adopt legislation. In order to organise a qualified majority for their positions, the Ministers have to form alliances with representatives of other Member States. This can best be achieved by debating in formal and private discussions with other Ministers, through clever negotiating tactics and cooperation with lobby groups. It must be borne in mind that, in contrast with the Commission, which represents the interest of the EU, and with the European Parliament, which represents European citizens, the Ministers of the Council represent the interests of their national governments.

Members of the European Parliament

During Model European Union, participants that simulate the role of the Members of the European Parliament will work together with their colleagues in order to first form a consensus within their parliamentary group on the two Commission proposals and to then seek to reach a compromise between the Parliament and the Council.

Members of the European Parliament are directly elected to represent European citizens in the EU institutional framework. The European Parliament works as the national parliaments, where representatives work together in parliamentary groups. These factions debate and discuss together legislative proposals emanating from the Commission, statements of the Council, newly released reports and general developments in European life.

One of MEU 2012’s novelties is the participation of Non-Inscrits, a.k.a. non-attached members. In MEU the Nis have a specific political identity that is assigned to them. Nis have to make speeches in front of the Parliament and be involved in many discussions with other factions. It is a very interesting and thrilling role, since most of the work involved will be to discuss with other factions and try to reach compromises.

Journalists have one of the most exciting tasks in Model European Union. They have the capacity to form public opinion and to profoundly influence important decisions. They scrutinise the actions of both legislative bodies and make them more responsive to public interests. Journalists keep all participants updated on the progress of discussions by producing a daily newspaper.

Being a journalist at Model European Union is a “never-ending” task. From trying to gather as much information as possible to keeping one’s eyes open during the social programme, everything is important.

During the simulation journalists will have the opportunity to learn about the different kinds of newspapers by producing tabloids and broadsheets. It is a great chance to get to know all facets of making a newspaper: planning and deciding on the content, writing articles, making interviews, taking pictures as well as editing and designing the layout. The journalistic work starts before the conference with a pre-conference paper and concludes with a contribution to the conference result booklet.

Lobbyists are professional advocates who are present at every political event representing interest groups or causes before the law-making bodies. Business, labour, NGOs, think tanks, as well as groups representing specific populations or issues, all rely on it to varying degrees.

In the simulation, lobbyists will work both individually and in coalition groups. They will speak on behalf of the organisation they represent. They will monitor the debates in the Parliament and Council in order to be informed about current developments. They will research and inform the delegates on the potential substantive and political impact of policy choices. They will compete to get the Ministers and the parliamentary groups on their side.

For this purpose, lobbyists should make an effort to establish contact with politicians and are free to do this at all times and in any environment, including lunches and parties. Furthermore, they can employ the media to heat up the debate, make their position public and criticise the statements and positions of public office holders. However, they should be careful not to compromise a good relationship with a politician by making a critical statement.

Interpreters facilitate multilingual communication in many different settings, e.g. conferences, negotiations or multinational institutions, such as the European Union. They render faithfully what is being said and how it is said either while the speaker is still giving his speech (simultaneous interpreting) or after the speaker has finished (consecutive interpreting).

As the task of interpreting (especially simultaneous interpreting) requires a high level of concentration, interpreters usually work in pairs in conference settings or in the European Parliament. Besides their mother tongue (A language), interpreters are usually proficient in several other languages, which are divided into active (B) and passive (C) languages. While interpreters generally interpret into their A and their B language(s) in conference settings, they only interpret into their native languages at the EU institutions.

In Model European Union, the interpreters will interpret from English into their native languages during the parliamentary sessions and press conferences, except for one session, during which they may be required to interpret from their respective native languages into English. This is called the Mother Tongue Day which has proved its importance over past editions of Model European Union. Participants thus have the opportunity to experience the debate as it is done in the European Parliament.

This is an optional additional role for the Members of the European Parliament during Model European Union. Faction Secretaries are primarily responsible for the pre-Strasbourg preparation phase. They are the main coordinators taking care of the pre-arrival faction meetings. They also oversee the preparation of common Faction Position Papers.

Faction Leaders are an important part of MEU political Faction. Every Faction elects one leader during the first Faction meeting who, along with the faction’s secretary, is responsible for the organisation and coordination of work. Faction Leaders chair their Faction meetings and organise the drafting of amendments to the legislative proposals. At the beginning of the debate on each proposal in the EP, they also hold a short speech in which they present their Faction’s position on each proposal.

In order to be able to participate you have to be an EU national, a national of the EFTA member-states or a national of Turkey or Croatia.

The application period usually begins around November, to end approximately by the beginning of the new calendar year(January). (reference to website)Each applicant must fill out an online application form (reference), write a short motivation letter and an essay on one of the topics given each year.

The next phase involves the marking of the applications by Organisers under a strict and fair grading system which helps them decide which ones are successful and which ones are not.